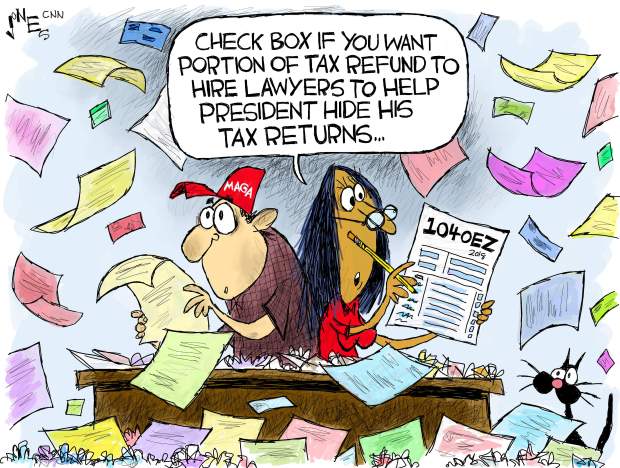 Don’t think there’s not a connection between Trump being the first president in forty years not to release his taxes and his corporation doing business with foreign governments. You would have to be blind, dense, obtuse, and an all-around friggin idiot not to connect these dots. In other words, you would have to be a Trump supporter.

This is where you see Republicans kicking and screaming defending him from showing anyone his tax returns. Why would you not want to see these? Donald Trump is a man who stiffed contractors, driving many out of business, operated a fake university, stole from charity, and even bankrupted a casino. He’s told nearly 10,000 lies since walking into the Oval Office. So yeah, let’s trust this guy when he says he’s not making money off the presidency or there isn’t a financial conflict of interest between him doing his job and making money off Saudi Arabia, Turkey, the United Arab Emirates, etc.

Trump donates his presidential salary of $400,000 back to the government and his supporters make a lot of noise about this. What they overlook is how much the government pays for his golf trips which have so far totaled around $96 million in the span of two years. Some of that golf trip money is going back into his pocket. When he visits his resorts, he charges the government for staying there. He charges the Secret Service rent at Trump Tower and at his resorts. He even charges them for golf cart rentals as they follow him around while he cheats on the course.

Trump doesn’t just make money off the U.S. government. Why do you think he takes the premier of China and the Prime Minister of Japan to Mar-a-Lago? Those governments have to pay to rent rooms there. His hotels, which were in deep financial trouble before he came into office, are doing brisk business now with foreign governments. They know the quickest route to get preferential treatment from Trump is through his ego and his wallet. Saudi Arabia has rented rooms from Trump that they didn’t even use. Every right-wing convention that comes to Washington now has to rent the ballroom at Trump’s new Washington Hotel. Trump even nixed the plans for the FBI to move from downtown Washington out of fear that a competing hotel would move into their location. Donald Trump is corrupt.

So, if you haven’t filed your taxes yet (tomorrow is the deadline), keep in mind that Trump does not want you to see his taxes. Also, keep in mind the huge tax break Trump and Republicans gave to America’s richest assholes, including Trump. Trump’s biggest priority, other than pushing a racist agenda on America, was to give himself a huge tax cut. He gave you a tiny temporary cut while he gave a huge permanent one to corporations. Guess who’s a corporation. Donald Trump.

In 2019, people have to realize that their president is a crook.

On a personal note, I completed my taxes around 8:00 am today and I don’t see how the Trump and Republican changes helped me at all.