An evergreen cartoon is something you can run at anytime. Current events won’t change it. Those cartoons are easy, which makes them hard for me. They’re often about weather, litter, or something harmless that people don’t really get upset over. Editors love them.

March 11-17 is Sunshine Week in 2018. Journalists use this time to point out the importance of a free press and champion laws for open information. Last year, I drew a cartoon for the American Society of Newspaper Editors and it was pretty evergreeny. They were allowed to use the cartoon for free in whatever way they saw fit, which included providing it to schools. It is an important issue, especially when we have a president accusing the press of being enemies of the American people while also praising authoritarians who have oppressed the media in their nations.

It was a lazy and terrible cartoon and I hated it. It was pretty obvious too and another cartoonist had drawn the exact same thing a year or so before for the same association. I did not know that until he contacted me the day it was published insinuating that I had stolen this really crappy idea from him.

I was jaded from drawing a cartoon I didn’t wanna draw, and then being accused of theft by a person who couldn’t get an original or unique idea with a brain transplant, that I decided I wasn’t going to do it this year. Besides, I had already hit the same subject for The Seattle Times a few weeks ago on a statewide issue for them.

Then, my friend Mike Peterson, who publishes the excellent blog Comic Strip Of The Day, used my cartoon from earlier today. Mike mentioned how I attacked politicians keeping secrets without mentioning Sunshine Week. He was correct in assuming I didn’t think about it.

Then, this idea hit me. Talking to Mike made me think how “Sunshine” is also a stripper name, and then ding ding ding (that’s how we get our ideas, people. We think about strippers).  I decided to draw it and give you a bonus cartoon for today (and it’ll let me take Saturday off to eat ice cream and watch a movie). I sent it to that editors’ association, and they can use if they want. I really don’t care if they do or not.

I’m happier with this cartoon than the one from last year because it’s more specific, more unique with my style of goofiness, and nobody can accuse me of stealing it.

By the way, a band of mine played a show in Washington, D.C. several years ago and this stripper named Sunshine showed up, and she wanted to wash my drummer’s hair with her feet (that’s totally unimportant to the story, but how can I leave that detail out?). I asked for her real name, and she said it was Desiree. Damn, that girl’s mom must have really wanted her to be a stripper.

Update: I just remembered that stripper’s name wasn’t Sunshine. It was Heaven. Where did I get Sunshine from? Eh. I got a cartoon out of it.

Here is the video. 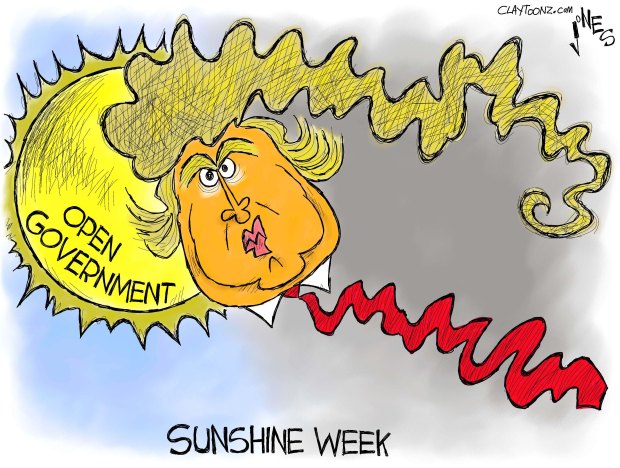 Sunshine Week is a national initiative by the America Society of News Editors. It started in Florida and went national in 2005 and is recognized for a week every March. It coincides with James Madison’s birthday.

Freedom of information and access to open government is crucial to have a free nation. It’s a constant fight for the press from your hometown weekly to The New York Times. Politicians from each party attempt to conceal information from the public. These perpetrators are on city councils, county supervisors, legislatures (general assembly in Virginia), to the United States Congress to presidents. There are a lot of people in government who don’t want you knowing what they’re doing.

We’re at a point where it’s more crucial and threatened than ever. We have a president who can’t tell the truth. He is a man who promised to reveal his tax returns before the election and has yet to do so. Releasing tax returns is not a requirement, but it sure would be nice to know who he’s in debt to.

This president has also referred to the press as “fake news” and an enemy of the American people. Donald Trump wants you to believe lies and deny the truth.

If you’re fine with Trump’s attacks on the media and his attempts to destroy a free press, ask yourself these questions: How are you informed? Do you like facts and information? Maybe you’re fine with the press shutting down because you don’t believe them anyway, which usually just means you don’t like what you’re hearing. Do you trust politicians to be the only source of everything you need to know?

If you get all your information from sources like Breitbart and InfoWars, then you’re not informed. You’re choosing ignorance and dumbing down. Those are not news organizations. They’re propaganda.

To quote Hannah Arendt, a German-American theorist, who said in 1974 “The moment we no longer have a free press, anything can happen. What makes it possible for a totalitarian or any other dictatorship to rule is that people are not informed; how can you have an opinion if you are not informed? If everybody always lies to you, the consequence is not that you believe the lies, but rather that nobody believes anything any longer.” Gee, that sounds like she’s describing someone we all know today.

If she’s not smart enough for you then maybe you should listen to Thomas Jefferson. He’s smarter than all of us. He said “The basis of our government being the opinion of the people, the very first object should be to keep that right; and were it left to me to decide whether we should have a government without newspapers, or newspapers without a government, I should not hesitate a moment to prefer the latter.”

I’ll stand with Tom over Donald. How about you?