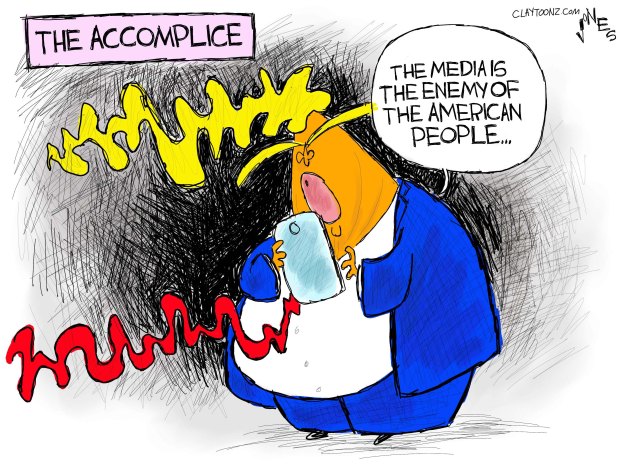 Journalists are used to taking hits. Politicians left and right, have always argued and fought with news organizations. There were bumper stickers decades ago that read, “Annoy the media. Vote Republican.” The media even comes in with lower approval ratings than Congress. Most ordinary people have issues with their local newspapers, and you probably know at least one derogatory nickname for your hometown paper.

Republicans and conservatives have especially been harsh on the media over the years. They have always accused the press of having a liberal bias. While we argue against that, we’re used to it. We can take it and we do.

But Donald Trump has turned that criticism into something ugly, hostile, and outright dangerous.

Trump pines for approval from the press, specifically The New York Times. Failing to get that, he refers to them as the “Failing” New York Times. The other top newspaper in the nation is called The “Amazon” Washington Post. You can count the endorsements he received from daily newspapers on one hand and have fingers left.

He pointed out members of the media by name at his rallies, inspiring his sycophants to heckle and jeer reporters simply doing their jobs. Journalists like Katy Tur of MSNBC needed security to get out of the building to keep her safe from a crowd who was told by the candidate he would pay their legal bills if they assaulted anyone. His campaign manager did actually assault a reporter from Breitbart, and that’s an organization friendly to Trump.

A Republican candidate in Montana beat up a reporter from The Guardian. Sarah Huckabee Sanders has turned the White House podium in the press room into a position to insult reporters asking her questions.
Trump refers to news and facts as “fake news,” while he argues that the National Enquirer should have a Pulitzer Prize.

All this has built an atmosphere of animosity. There was a similar atmosphere built by Newt Gingrich and the GOP in 1995 against all things government when a domestic terrorist bombed a government building in Oklahoma City. It was the same feeling put out by Republicans and the Tea Party during Obama’s presidency when a Democratic Congresswoman was shot in the head in Arizona. Sarah Palin had put crosshairs on her congressional district.

The man who killed five at the Capital Gazette in Annapolis, Maryland yesterday had a long-running feud with the newspaper long before Trump ran for president. But, he did this in an atmosphere where the president labels the media as the “enemy of the American people.” Surely, this shooter didn’t disagree with that. In fact, he made a post on Twitter with a veiled threat toward the Gazette for something they wrote about Trump. Surprise!

Today, Trump offers “thoughts and prayers” to the media, taking a break from his daily offering of lies and condemnations. As a member of the free press, I say no thank you.

Republicans and Trump sycophants will argue this shooter had no connection to Trump and that they only shared a hatred for the news and the people who report it. The man could have walked in wearing a MAGA hat, and they would still fail to see a connection. There’s a connection.

While Republicans are upset that they get heckled and kicked out of restaurants, other Americans are being killed.

Congresswoman Maxine Waters has encouraged people to harass members of Trump’s cabinet and make them aware of their disagreements. Trump has described her comments as encouraging people to assault Republicans. Trump also issued a veiled threat at her over the comments. In the past, he made comments encouraging gun owners to take out Hillary Clinton if she won the election.

If Waters’ comments that you should tell Republicans you disagree with them is a call for violence, then the man who calls reporters “horrible,” “dishonest,” and “the enemy,” is an accomplice to the shooter of the Capital Gazette.

Republicans have been on a tear attacking the media. You can find photos of people at Trump rallies with “lynch the media” shirts. Milo Yiannopoulos, a right-wing troll who was most excellent in Springtime for Hitler, “joked” that journalists should be shot right before journalists were shot. And, the leader of the free world, who should champion liberty and democracy, says the foundation to democracy is the enemy.

Despite all this, the press is doing some of the best work in our nation’s history. The Times, The Post, CNN, NBC, and many others are covering the assaults on our nation by this administration subservient to a Russian autocrat.

Friday morning, the Capital Gazette published a newspaper. Why? Because, that’s what they do. They report the news. Whether you, Trump sycophants or the Trump himself, hates that facts are being reported, they will continue to be reported.

It’s what we do. No gunman or enemy of a free press, who also happens to be president of the United States is capable of stopping us. 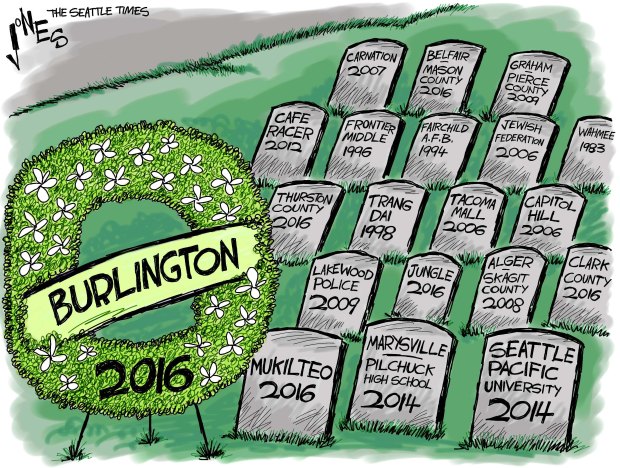 This cartoon is on today’s opinion page of The Seattle Times. It accompanies their excellent editorial.

Twenty-one people have been killed and eleven injured in seven mass shootings in Western Washington just this year. 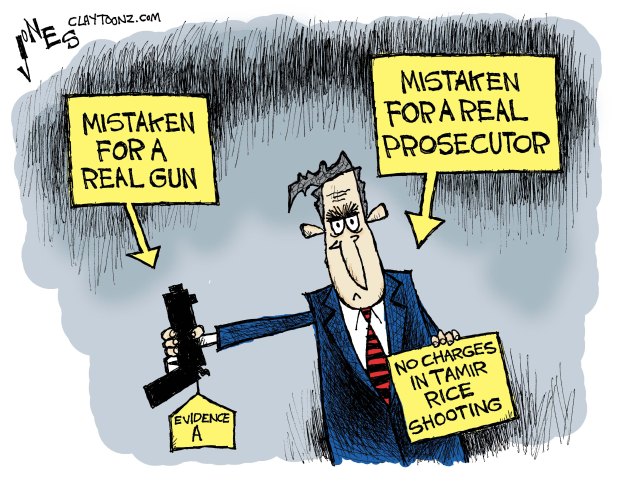 Prosecutors usually prosecute. That’s their job. When it comes to prosecuting police, some act more like defense lawyers.

Cleveland police shot 12-year-0ld Tamir Rice within two seconds of stopping their cruiser a few feet from him. Rice was playing in a park with a toy gun. A citizen called the police and said he thought the person with a gun was a juvenile and the gun could be a toy. The dispatcher didn’t convey either of those points to the responding officers.

Prosecutors usually work closely with police. So when it comes time to see if they should be charged for shooting someone, the prosecutor can be resistant. That’s what happened in Ferguson.

Prosecutors put together a grand jury and they control the process and the information the jurors are exposed to. California, realizing there could be conflicts of interest, doesn’t allow grand juries to make decisions on charging the police in shootings. In the Cleveland case, the prosecutor brought in witnesses and evidence that pointed toward it being a “perfect storm of human error.” Tamir Rice’s mother described it more as a sabotage.

The defense centers on the police mistaking the fake gun as a real gun. But even then, should police shoot someone within two seconds? Tamir was playing with a toy gun. Some police shouldn’t be playing with real ones. 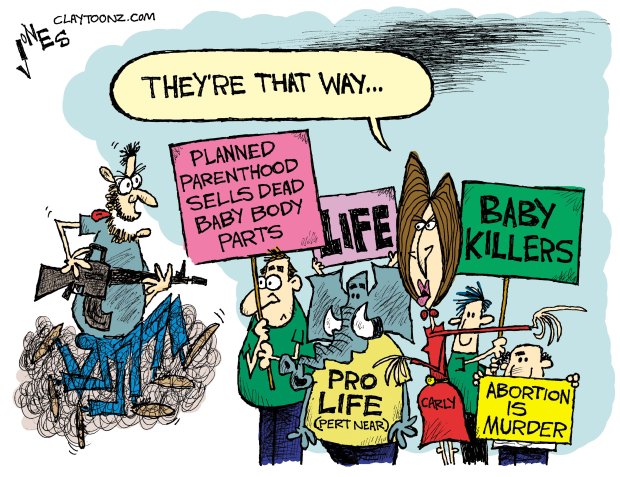 If I had much better business sense I wouldn’t draw this cartoon at this time. Being that it’s the Saturday after Thanksgiving this will be one of the first editorial cartoons on the issue. I should draw the Rocky Mountains crying and that cartoon would be reprinted in USA Today. Really.

Maybe I’m jumping, no pun intended, the gun. We don’t know the shooter’s motives. Yes he went into a Planned Parenthood clinic and started shooting. But there are other establishments in the vicinity. Perhaps he had a vendetta against Super Cuts. If I am wrong I will call myself out on this blog.

A gunman went into a Colorado Springs Planned Parenthood clinic Friday and had a six hour standoff with police. One police officer and two civilians were killed. Four other police officers and five civilians were injured. The suspect eventually surrendered and is now in custody.

Every time a policeman is shot the talking heads at Fox News says the Black Lives Matter movement is complicit. Whenever there’s violence at an abortion clinic then it’s just a lone lunatic.

The “pro life” crowd is full of lunatics. They don’t seem to have morals or ethics when it comes to furthering their agenda. Lying is acceptable, as Carly Fiorina and others have proven. Spreading lies that PP is harvesting dead children, calling them murderers, and saying they’re engaging in a holocaust is not engaging into a civil debate. Neither is standing outside a clinic screaming at people who are making the most difficult decision of their lives. Operation Rescue’s leadership includes a member who’s a convicted felon who attempted to bomb an abortion clinic. The same group posted a doctor’s home and church address on their website before he was murdered.

Four abortion clinics have been targets for arson this year alone.

An antiabortion group conducted a sting operation and secretly filmed Planned Parenthood clinics. The videos were presented as evidence PP was breaking laws and selling aborted fetuses body parts and making profits from the sales. The videos have all be proven to be doctored. Seven states have investigated PP and every single one has found them innocent of all the accusations. Still, Republican candidates are spreading the lies and Congress wants hearings on PP, not the group that made the videos.

The pro life crowd is pretty quiet over the shooting. If the shooter was a black guy or a Muslim they would have made a LOT of noise by now for more guns, profiling and limits on immigration. It’s really too bad for them the shooter is a white guy.

None of the fourteen Republican political candidates, as of this writing, have expressed anything about the shooting. A lot of pro life people have actually expressed support for the shooter. A “friend” of mine actually wrote “yawn” in response to the coverage of the shooting and followed it up with an argument of how many babies have been aborted. These are truly horrible people. The people who express so much concern over terrorism sure are quiet and even supportive of it sometimes.

The label “pro life” is being seriously abused. 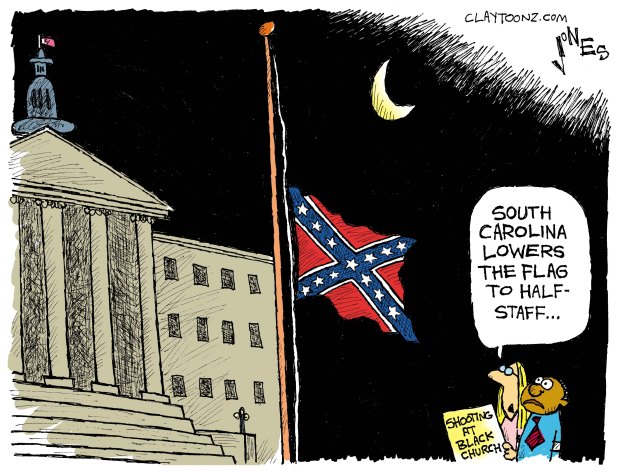