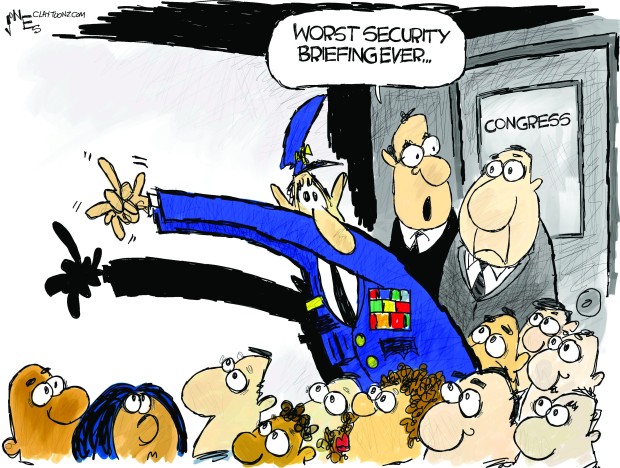 We’ve talked about this.

You can’t just lie nilly-willy regarding national security and foreign policy the same way you do about crowd sizes and TV ratings.

Wednesday in a closed-door briefing for Congress, officials in the Trump administration laid out the justifications for the U.S. drone strike that killed Iran’s top military commander. Many representatives left that briefing saying, “What the fuck?”

The briefings were led by Defense Secretary Mark Esper, CIA Director Gina Haspel and Secretary of State Mike Pompeo, which doesn’t give you a lot of confidence that they were honest and straightforward.

While one Democrat said the briefing hadn’t disclosed anything they didn’t already know from watching cable news, one Republican described it as “insulting and demeaning.”

Utah Senator Mike Lee said it was the “worst briefing I’ve seen” on a military issue in his entire nine years serving in the Senate and that he, along with Rand Paul, is now going to support Senator Tim Kaine’s proposal to limit the president’s military authority.

One representative said, “They gave us no time, place, or method” when describing the Soleimani threat the administration keeps claiming was “imminent.” Instead of an explanation or a timeline of how imminent the threat was, the congressman said, “we got a historical overview of decades-long malign activities from Iran. It begs the question: Was the attack on Soleimani more in retribution for what he’s done, or what he was planning?” And, if you listen to the Trump team, that’s what they do every time. They go into Soleimani and Iran’s past. We know they’re bad. Tell us what bad stuff was about to happen.

For that, Trump went from one embassy was going to be attacked to four. No one who attended those briefings, including those who gave it, has backed up that claim.

I won’t be shushed. Not by the likes of these people. You put our nation in more danger and you need to explain why. According to Senator Lee, the briefers told them that they “need to be good little boys and girls and run along and not debate this in public.” Lindsey Graham, who later compared Trump’s slurred address on the attack to Ronald Reagan’s tear-down-this-wall speech, said anyone who doesn’t fall into lockstep behind Trump on this is “empowering the enemy.” This after Republican Doug Collins accused Democrats of being in love with terrorists and former United Nation’s Ambassador Nikki Haley claiming they were mourning Soleimani.

Keep in mind, Trump, his administration, and Republicans are telling us to trust information (they won’t share) from the sources whose credibility they’ve spent the past three years destroying. That’s like making fun of Rand Paul’s hair, which Trump has done, then asking his advice for a stylist.

Since we can give up all hope of Donald Trump and his base ever realizing it, then the adults in his room should: You can’t just spout off a lie to lawmakers regarding national security, terrorism, and foreign policy as if you’re speaking at one of Trump’s hate rallies where you can just make shit up on the spot and not worry about anyone you’re selling it to asking for a follow-up. You can’t tell lawmakers, even some Republicans (shockingly), don’t worry about the details and just trust us.