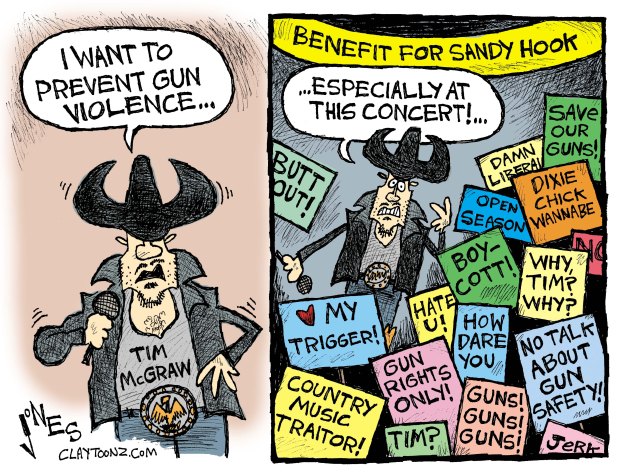 I’m not a big country music fan. If you challenged me to name three songs by any country artist I would probably fail. I think the genre is cliche driven and aims for the lowest common denominator. I know of one that came out fairly recently with lyrics “chew tobacco, chew tobacco, chew tobacco, spit.” This is not Lennon/McCartney stuff.  It’s Nickelback with a twang.

The music is not deep but it’s written for people who mistake sappy sentimentality for something deeper. They’re a very emotional and reactionary audience.

That audience is so emotional and reactionary that Billy Currington has just dropped out of playing a concert to benefit survivors of the Sandy Hook shooting tragedy. Country fans are livid and hostile to the performers booked for this concert.

Tim McGraw is the headliner for this show and his fans are threatening to stop buying his music, or even stealing it on the internet. Country fans consists of gun nuts and interpret “hey, maybe exercising some gun safety” as a threat to their right to own guns and accidentally shoot their own foot off. They fail to see that they’re threatening McGraw’s constitutional right to state his opinion.

To McGraw’s  and opener Chase Bryant’s credit, they’re still playing the show. They’re showing a lot more spine than Currington who tweeted, then deleted “i didn’t sign up for s***. just hearing about it like you are. so f*** u too.” He later stated “I’ve never been one to take on controversial issues.”

Well, Mr. Currington. I’m in a very different line of work and I will take on controversial issues. But, if that whole music career thing fizzles have you ever considered being a newspaper publisher?