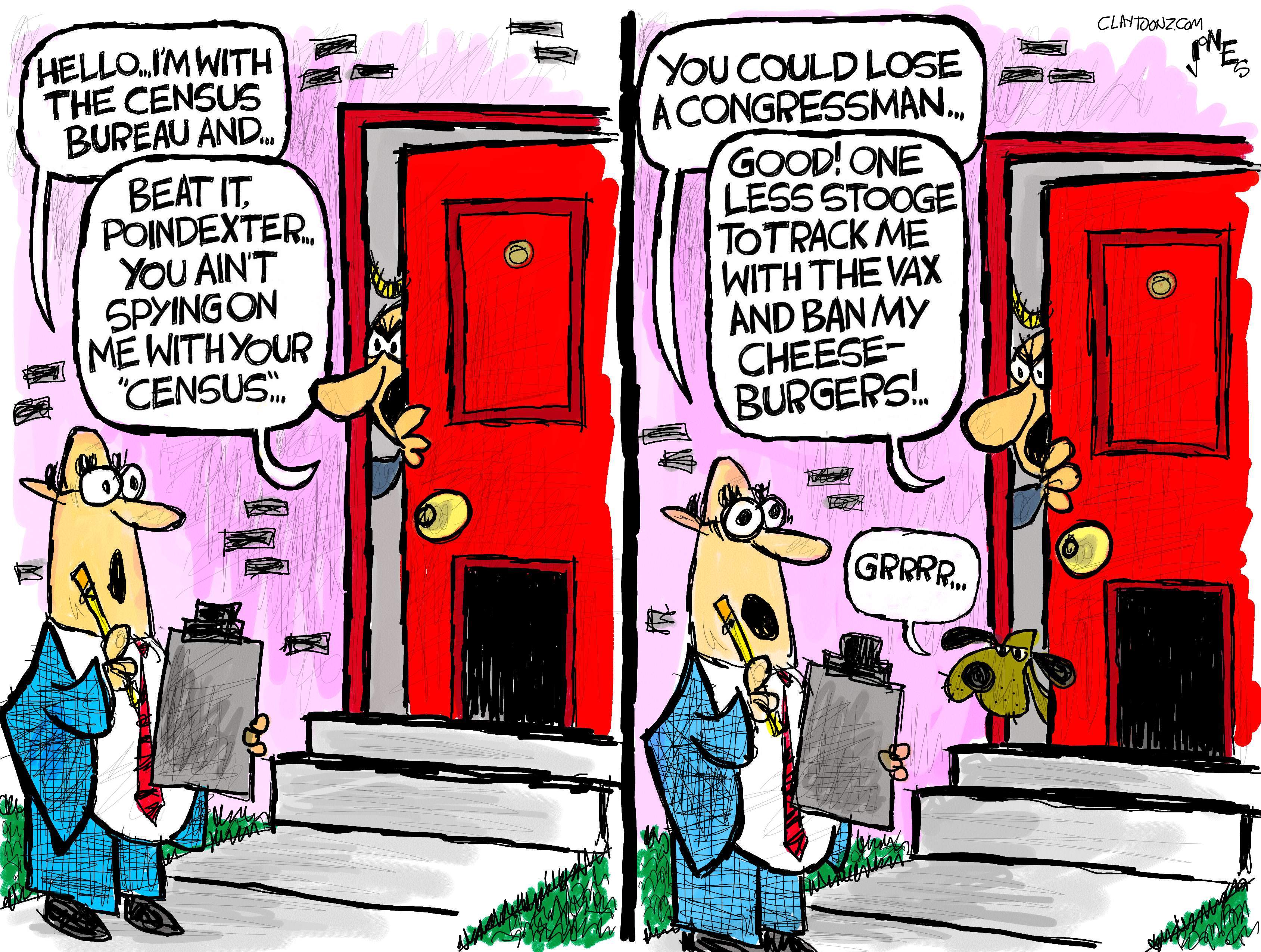 Another example of Trump fuckery during the abomination that some prefer to call the “Trump presidency,” was his meddling with the census.

Every ten years, the government counts the population in the United States. The United States Constitution specifically spells out that not just citizens or voters are to be counted, but every single person. That includes immigrants whether they are authorized or not. Everyone has representation in Congress, not just those who choose to vote. Your children have it and even unauthorized immigrants have it. The lazy idiot next door who has never voted in his life has a congressman. Everyone is represented, or at least supposed to be.

Leave it to the fuckers who call themselves “Constitutionalists” to again fuck with the instructions mandated by the Constitution. The Trump administration did not want immigrants counted. Why? Because excluding immigrants could eliminate congressional seats and electoral votes in states like California and New York, and increase them in fucknut places like Texas and Florida.

There are 435 seats in Congress. Each state is awarded a number of seats based upon its population. In the past, there was a lot of shady shit with the census in how slaves and Native Americans were counted. Slaves were only considered three fifths of a free person and it wasn’t until the 1940 census that the government accepted the fact Native Americans should be counted. After all, Native Americans were here first. Unfortunately for the Trump administration, slavery isn’t legal anymore and we count Native Americans, even if North Dakota tries to keep them from voting. So they decided to not count unauthorized immigrants…or at least try.

Basically, it was a dirty trick. The Trump administration wanted to include a question about citizenship and immigration. When you are from the government and you ask an unauthorized immigrant if he’s an immigrant, guess what happens? He doesn’t participate. That’s what happens. And the Trump administration publicly stated it wanted the Census Bureau to share its data with other government agencies. Hello, Border Patrol.

The Supreme Court knocked that question out, but after a year of fighting over this, every unauthorized immigrant in the nation knew the Trump administration had found another way to target them. It didn’t matter what a census worker was going to ask, unauthorized immigrants weren’t answering and you can’t really blame them. A lot of census forms landed in the trash. Add your average everyday paranoid fucknuts to the mix, and a lot of people were not answering the census.

Now, California and New York are both losing a congressional seat. Other states losing seats are West Virginia, Ohio, Michigan, Pennsylvania, and Illinois. The states gaining seats are Montana, Colorado, Oregon, North Carolina, Florida, and Texas. Each of those states is gaining one seat except Texas, which is gaining two. We just gave three more congressional seats to the most backward, troglodyte, dumbest fuckers in the country.

When a blue state like California loses a seat, it doesn’t mean Texas gets a blue seat. As these states lose or gain seats, they have to redistrict. Will California lose a Republican or a Democrat seat? How will these districts be drawn? This is where the fun begins. Or in some states like Texas and Florida, more fuckery.

Democrats in Illinois can redistrict, but states like New York, California, Oregon, and Colorado typically use bipartisan commissions. Texas and Florida will be redrawn by Republicans. It’s not like Texas is going to take these two brand new seats and plant them in the center of Houston. Texas and Florida are looking to increase their GOP majorities in Congress.

We gave an additional seat to a state controlled by a guy trying to make it legal to run over black protesters, and two more to a guy lying about cheeseburgers. More on that in a minute.

This also affects the electoral votes, but that may not be as drastic. President Biden beat Trump 306 to 232 electoral votes. If this change had been in effect before the 2020 election, Biden would have beaten Trump 303 to 235. But Democrats only control the House with a five-seat advantage. Sitting presidents usually lose seats in their first midterm election. As scary as it sounds, Republicans should win back Congress in 2022, through demographics, gerrymandering, and changing voting laws so black people can’t vote.

Even though more people in this nation will vote for Democrats, Republicans will win more seats.

As it turns out, New York is losing a seat in Congress because 89 people, out of the state’s 20.2 million, refused to fill out the census. These are probably the same people who refuse to get vaccinated because they think it’ll contain a tracking device and believe Joe Biden is going to ban hamburgers.

What? Ban hamburgers? Republicans are pushing a lie that President Biden’s climate plan calls for a ban on hamburgers. You may think, “So what?” when you hear that one of the liars is Donald Trump Jr, but the entire Fox News network is pushing this. Nikki Haley, who is supposed to be intelligent, is pushing this lie.

Was the lie about taking away guns not enough? Is there a huge red meat lobbying group paying these people to push this lie to push burger sales like the NRA does to boost gun sales?

Trump’s former economic advising idiot, Larry Kudlow, pushed the lie on his Fox News show. He said, “No burgers on July Fourth. No steaks on the barbie. I’m sure middle America is just going to love that. Can you grill those Brussels sprouts? So get ready: You can throw back a plant-based beer with your grilled brussels sprouts and wave your American flag. Call it July Fourth green.”

Like me, you’re probably saying out loud, “How the fuck does Larry Kudlow have a TV show?”

Larry Kudlow was one of the biggest bullshitters to come out of the Trump administration, and that’s saying a lot. So, why would anyone give this lying piece of crap a TV show? And it’s not even on Newsmax or OANN. It’s on Fox. Also, Larry, yes. You can grill brussels sprouts. Please do that and make Don Jr eat one. More on that in a minute.

Also, Larry you stupid fuck…every beer is a plant-based beer. Have you heard of wheat and barley? Look into it, you deranged filthy lying lunatic.

Other people who have pushed this lie are some of the usual liars like Qfucks Marjorie Taylor Greene and Lauren Boebert. Greene called Biden the “Hamburglar” and Don Jr, responding to a lie that Americans would only be allowed four pounds of red meat a year, that he had four pounds of red meat yesterday alone which puts a horrible image of a future Trump Jr colonoscopy into my brain. Dude, eat a vegetable.

North Carolina representative Madison Cawthorne, who already has a very sketchy history with not telling the truth, said, “Not only does Emperor Biden not want us to celebrate the 4th of July, now he doesn’t want us to have a burger on that day either.” Wow. He got two lies into one sentence. That’s like a double whopper.

By the way, I ordered from Burger King a few weeks ago and they have a deal for two Whoppers for the price of one. I didn’t need two Whoppers, but how do you turn down a free Whopper? Anyway…

Greg Abbott, who lied about wind turbines freezing being the cause of Texas’ blackout pushed the lie along with the governor of Idaho, who I’m shocked didn’t create a new lie about a Biden French fry ban. What a missed opportunity. They could make a new commercial with that Idaho potato farmer and his dog chasing his hijacked potato truck, with the hijacker being Joe Biden. Shit, did I just write their next commercial for free?

Nikki Haley tweeted a meme from her political action committee featuring Texas’ iconic “Come and Take It” flag, repurposed to show a burger dripping cheese instead of the cannon, with the text reading, “Oh, I’m sorry. I thought this was America.” This person was our ambassador to the United Nations. This shit is just embarrassing. If she did this shit while she still had that job, some EU member would have probably told her to shut up saying, “You Americans eat too much meat anyway. Look at Don Jr.”

Nobody is coming to take away your cheeseburgers…just your vote, your representative, and one of your electoral votes, and if you’re an immigrant, possibly your children.

As for Don Jr, I really think someone should introduce him to the Impossible Whopper. Seriously, dude. Four pounds of red meat a day? Is that a side effect of doing something else that would drive your adrenaline up There are just some things I don’t want to know.