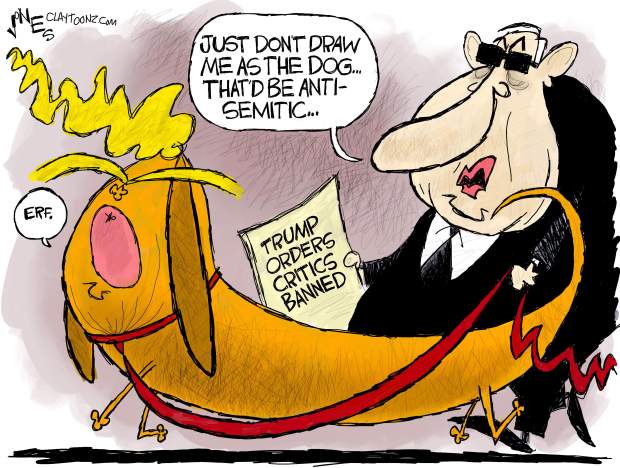 This cartoon will not be in The New York Times. Not that I’ve had a lot of cartoons in that publication, only two that I recall, but after their international edition ran a cartoon of Benjamin Netanyahu as a long wiener dog leading a blind Trump, the Times banned all political cartoons from all of their editions.

Critics howled that the cartoon was anti-semitic. In response, the Times buckled, apologized, and even cut ties to two freelancers, Heng Kim Song and Patrick Chappatte, who had contributed two cartoons a week for 20 years. These two cartoonists lost their jobs for a cartoon that neither of them drew. The offending cartoon was actually created by Portuguese cartoonist António Moreira Antunes. Despite banning all cartoons, the Times still intends to submit graphic entries for the Pulitzer Prize.

Ilhan Omar and Rashida Tlaib, two Muslim women representatives in the United States Congress had intended to visit Israel. Despite their criticisms of the government’s treatment of Palestinians and a call to boycott the nation, Israel said they’d be welcome. Israel is a democracy and democracies encourage freedom of expression. But then Trump crapped out a tweet.

Trump tweeted that Israel would be showing “great weakness” if the nation allowed the congresswomen to visit. Omar and Tlaib are two of the four members in “The Squad” who racist Trump said should “go back to where they came from,” despite three of them being born in the United States (Omar was born in Somalia and came to the U.S. as a refugee).

After Trump put pressure on Netanyahu, Israel barred both from entering the country citing a law that prohibits anyone from entering who has called for boycotts of the nation.

The White House claimed Trump didn’t urge the Israeli prime minister to bar the representatives, but his tweet is proof that is a lie.

This morning, Israel reversed its decision and decided to allow Tlaib to visit her family in the West Bank under a “Humanitaria pass.” Tlaib has declined saying she won’t make the trip “under these oppressive conditions.” With Omar still banned, Tlaib is showing dignity and morals in refusing to go, two qualities Donald Trump lacks. In case it was in question, now we know those are two qualities Netanyahu also lacks.

Israel’s ambassador to the U.S. said a month ago that the representatives would not be barred as a sign of respect for the United States Congress, as Omar and Tlaib are duly-elected representatives. Trump and Netanyahu have a long way to go in learning about respect.

Republicans are also showing that once again, they are consistent with being inconsistent. They got upset whenever Obama commented on matters that didn’t involve him like when a black professor was arrested by a white cop for entering his own home, but are silent when Trump attacks a black NFL player who kneels during the national anthem. The inconsistencies extend to foreign relations too, as Republicans were critical when Obama expressed opposition to Brexit, but now they’re all quiet about Trump barking orders to Netanyahu. They have also been silent about the incoming Trump administration communicating with Russia about sanctions from the Obama administration between the 2016 election and Trump’s inauguration.

Who visits Israel is not Trump’s business. But, Donald Trump is petty and will go to any lengths to hurt his enemies. He even said Omar and Tlaib “hate” Israel and Jewish people.

Someone will say this cartoon is anti-semitic because, for Republicans, any criticism of Israel is anti-Jewish. These are the same people silent over Trump’s dog whistles about “globalists” and his retweeting anti-Semitic tweets with the Star of David (which he defends as a sheriff’s badge) over stacks of money. Once again, Republicans are consistent at being inconsistent.

I’m not afraid of criticizing Netanyahu. He’s a crook who’ll probably be in prison sooner than later. Hopefully, the same fate awaits Trump. If you have a problem with me criticizing Bibi, bite me.

This cartoon was first published December 31, 2018, in The Costa Rica Star. Yeah, it ran last year.

This is my annual Baby New Year cartoon, and I used it for The Star. I did another with the baby for my syndication, but that was a lot different. This is one cliché I’m kinda OK with, depending on how it’s used.  I feel like it’s almost mandatory for newspapers to run one of these, so it’s like I better draw one.