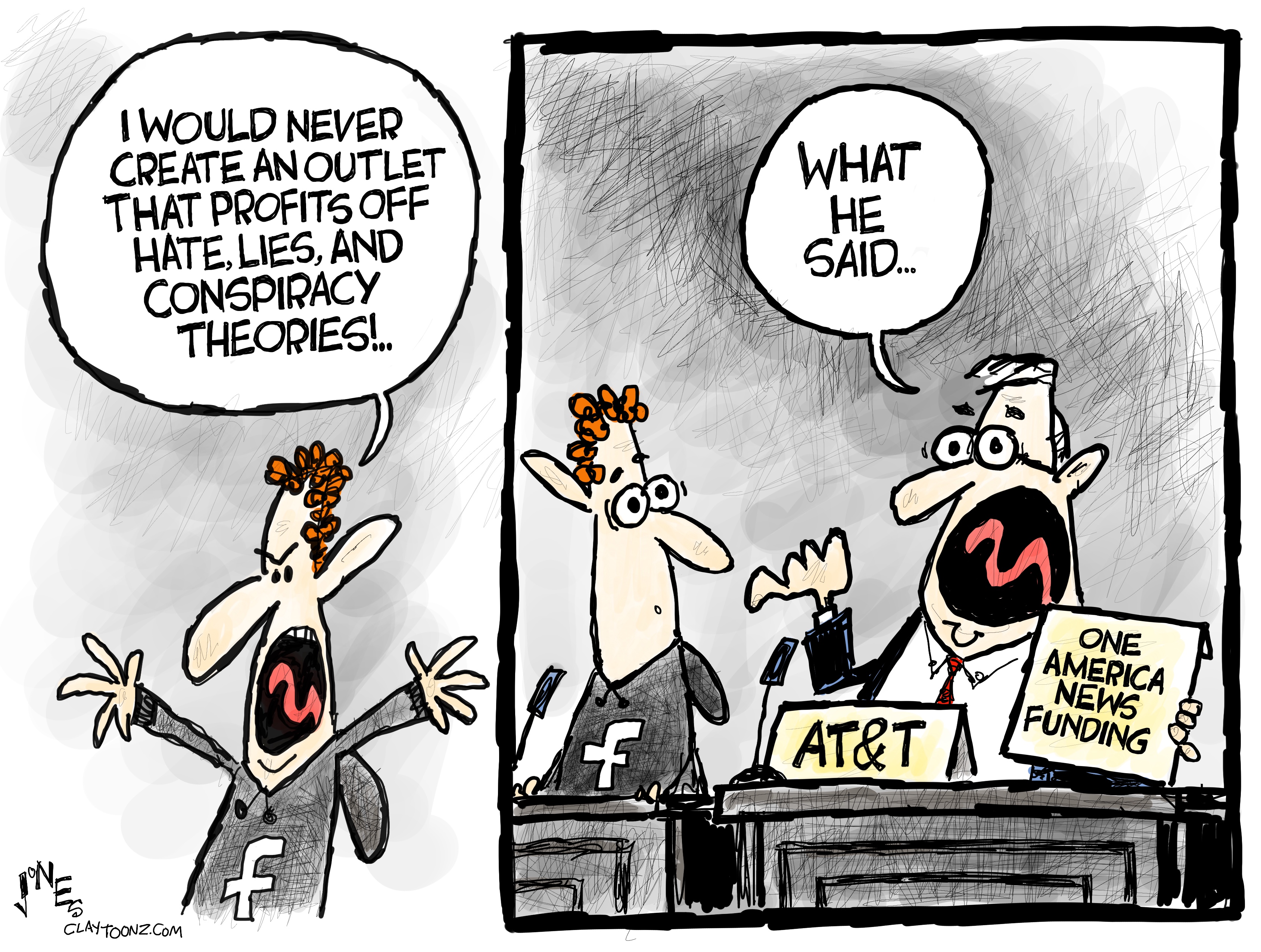 According to a report by Reuters, which is an actual news source, AT&T helped create the far-right NON-news source One America News (OAN). Reuters’ report has been confirmed by CNN another legitimate news source. Why is this significant? Because AT&T owns CNN.

Full disclosure time: I work for CNN. I am a freelancer who provides one cartoon each week for the CNN Opinion newsletter. But I’m still a small fish in the grand scheme of things and I’m probably more on AT&T’s radar as a customer than I am as a freelance employee. Ya’ see, my wireless service is through AT&T. My iPhone was purchased at AT&T. My iPad was also purchased at AT&T. I am making payments to AT&T each month for my wireless service, iPhone, and iPad. Fun fact: This cartoon poking fun at AT&T was drawn on an iPad purchased from AT&T. Also, this cartoon making fun of Facebook has already been posted on Facebook. BWAHAHAHAHAHAHA!!!

Anyway…CNN has covered this story as they should. They cover criticism of competing networks and other news outlets all the time. As fair and responsible journalists, they are required to cover it. Check out this clip of Don Lemon and Oliver Darcy. Lemon and Darcy are not the only CNN people to tackle this subject. Don Lemon said what airs from OAN is as “corrosive as anything that comes from Facebook.”

One America News is NOT a news source. It’s a conspiracy network, but AT&T, which owns Time Warner, probably views it as just another revenue stream to put on TV like Comedy Central, Cartoon Network, and Nickelodean (I don’t know who owns those but they’re on AT&T platforms). Now, with OAN, we have the Yee-Haw Network.

Robert Herring, who is the founder and chief executive of OAN, has testified that the inspiration to launch his network in 2013 came from AT&T executives.

AT&T-owns television platforms, including satellite broadcaster DirecTV. AT&T is the largest communications company on the planet. They’re bigger than Oprah. According to Herring in a 2019 deposition, “They (AT&T) told us they wanted a conservative network. They only had one, which was Fox News, and they had seven others on the other (liberals) side. When they said that, I jumped to it and built one.” Now, according to a 2020 sworn testimony by an OAN accountant, AT&T accounts for 90 percent of OAN’s revenue.

Herring has testified he was offered $250 million for OAN in 2019. Without the DirecTV deal, the accountant said under oath, the network’s value “would be zero.”

Take one moment to let this sink in: If it wasn’t for the owners of CNN, how much would Fox News be worth? Fox News is on those same platforms.

AT&T may be looking to break CNN off from Time Warner and sell it to pay off debts, which makes you wonder if AT&T views CNN, one of the nation’s best news outlets, the same way they view OAN, one of America’s most notorious bullshit outlets. Corporations may only see dollar signs.

AT&T defended itself saying it’s not a revenue stream for OAN and they initially refused to carry the network on DirecTV, but did cave after OAN sued them. AT&T says they don’t control any programming and any decisions to continue carrying OAN will be up to DirecTV, which has been spun off into its own separate company….with 70 percent still owned by AT&T (somebody does research. Cough. Cough).

NAACP President Derrick Johnson said in a statement issued on Wednesday, “We are outraged to learn that AT&T has been funneling tens of millions of dollars into OAN since the network’s inception. As a result, AT&T has caused irreparable damage to our democracy. The press should inform the American public with facts, not far-right propaganda and conspiracy theories.”

AT&T may not be the press, but they are caretakers of journalism and a media giant. There should be corporate responsibility. Hell, I get mad at news outlets for publishing far-right conspiracy MAGAt cartoons, and the syndicates that distribute them. For syndicates like Cagle Cartoon and my former agency, Creators Syndicate, there’s no accepted responsibility for poisoning our nation with toxic bullshit. While all sides should be presented equally, there should be a line that stops at conspiracy theories. It’s bad enough news outlets have to quote Donald Trump.

I’m sure executives at AT&T aren’t writing copy for OAN, which is a network for people who find Tucker Carlson too woke. But, according to these reports, there wouldn’t be an OAN to poison our nation if it wasn’t for the efforts and enthusiasm of executives at AT&T.

And if AT&T gets mad at me for this, Hey, AT&T guys….I’m just an insignificant small fry. Nobody cares about me. Nobody reads this blog. Look at Don Lemon! Yeah, that guy was doing all sorts of smack-talking about you, and he was doing it in front of millions of viewers. Did you hear him say “corrosive”? You should go deal with him and ignore what’s going on over here. Tomorrow, I might go back to making jokes about Nickelback. I’m crazy. Nobody listens to me. Also, have I told you how much I love the iPad you sold me? It’s really wonderful and the iPhone, don’t get me started. I love the way my iPad rides on my iPhone’s hotspot when I leave my home…and did I mention I bought Airpods too? See? I’m not that bad. Right? Hello?

Another fun fact: It’s time for me to draw this week’s cartoon for CNN. Pray for me.

Creative note: I was going to put AT&T’s spokesperson, Lilly, in this cartoon. She’s to AT&T what Flo is to that insurance company and the gecko is to that other insurance company (see how well advertising works?). But, I didn’t know if Lilly was known well enough and I kinda have a crush on her. So, she escaped my wrath unscathed this time. Lilly, call me.