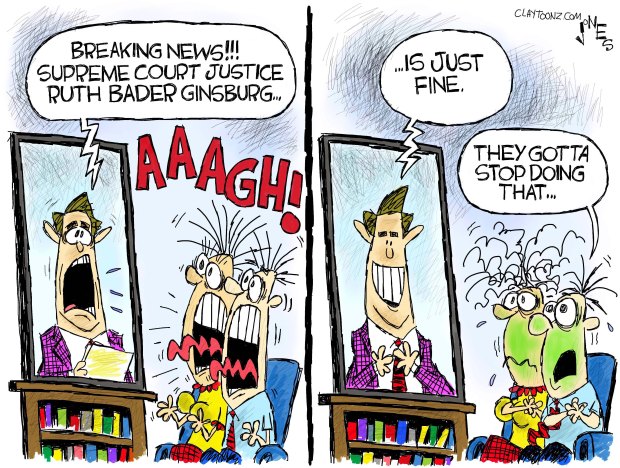 Writer Morgan Jerkins recently wrote for The Washington Post that obsessing over the health of Supreme Court Justice Ruth Bader Ginsburg is bad for democracy, bad for her, and bad for us. I totally agree with that, but what is also bad for us is the presidency of one Donald J. Trump.

After having a Supreme Court seat stolen from a Democratic president and given to a racist nincompoop installed by a hostile foreign power, then watching Senate Republicans change the vote requirements for confirming two staunch conservatives, liberals, moderates, and anyone else who cares about the direction of this nation has every right to worry about the Notorious RBG. As understandable as it is, it’s also morbid.

It’s not just morbid that Republicans and Trump sycophants are wishing for her demise, it’s morbid that our hope for her health is less about her and more about the bench. It’s like you’re picking up ice cream on the way home, and your family hopes you’re not in an accident because they really want ice cream.

It will be truly damaging for our nation if Trump gets a third SCOTUS pick when he rightfully never should have gotten one. But, liberals need to take the court as seriously as Republicans. Republicans are always obsessing about the court and hoping to overturn Roe v. Wade in the future. Democrats are complacent because they have the law in place they want, ignoring that there is a real possibility it can be taken away. Republicans are much better at turning out the vote over the Supreme Court. Liberals need to catch up.

RBG has received much attention lately. There has been a recent documentary, a movie of her life starring Felicity Jones, and even her workout routine has been documented. Ginsburg has survived both colorectal and pancreatic cancers. This month, she missed her first oral argument in 25 years while recovering from surgery for lung cancer.

While she is 85 and we worry about her health, she can probably climb more stairs than 72-year-old Donald Trump.

I try not to be as morbid about RBG, and I hope she outlives the Trump presidency/disaster and has a long and healthy retirement. But honestly, I’m the people in my cartoon. My heart jumps into my throat every time some news anchor starts a report on her. They need to start their reports with, “She is just fine so don’t panic. Today Ruth Bader Ginsburg, blah blah blah.” Stop giving me micro heart attacks, media.

I’ve had this cartoon idea for a couple months because that’s how long the news has been freaking me out over RBG (I have a large file of cartoon ideas, most of which I’ll never draw). So, if you stumble upon a wish, a shooting star, a lucky penny, a well, wishbones, a genie in a bottle, don’t be selfish. Wish for the health of RBG.