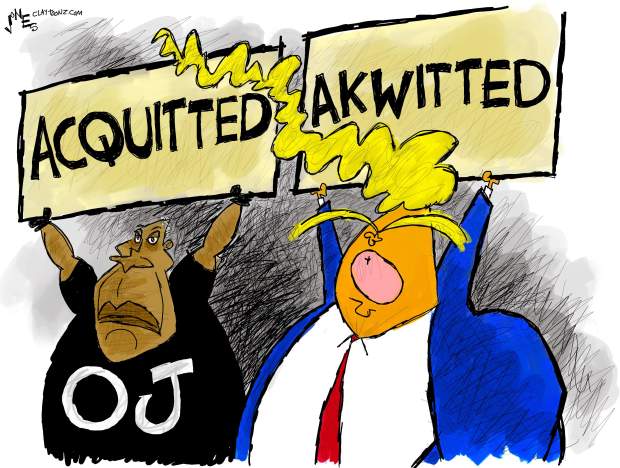 After O.J. Simpson was acquitted of double murder in 1995, he probably threw a victory party. But I bet even O.J.’s party wasn’t as vindictive and petty as Donald Trump’s. It probably didn’t have as many Big Macs either.

Donald Trump went after all his enemies. He said Speaker Nancy Pelosi was a “horrible person” and questioned her religion as well as that of Mitt Romney’s. He spent over an hour airing his grievances. He actually started early at the National Prayer Breakfast, which is pretty surreal. For the organizers of the breakfast who didn’t take down Trump for attacking people’s religion, maybe their commitment to their religion should be questioned for allowing such a rant by Mr. Two Corinthians. Evangelicals are just as much cowards as the entire Republican Party for sacrificing all their principles to Hair Fuhrer.

Trump also attacked the nepotism of Hunter Biden while claiming his kids “could” be making millions of his presidency if they wanted to. Then, he pointed out Ivanka, who literally has a position in the White House along with her husband where they both have security clearances they couldn’t qualify for. Did I already use the word “surreal?”

Usually, when a person gets off after doing a terrible crime, such as murder or attempting to bribe a foreign nation with taxpayer money to help their political campaign, they’d lay low. But then again, O.J. did write a book titled “If I did it,” which was a “hypothetical” description of how he “would have” conducted the murders “if he did it.” Interestingly enough, O.J. was supposed to give an interview on a network special to promote “If I did it” before it was canceled after affiliates protested. I’ll give you one guess to name that network. Clue: It’s the same one Trump and each of his sycophants favor and has its hosts speaking at his rallies. Maybe O.J.’s ghostwriter could be available for Trump’s version of “If I did it.”

And another thing Trump and O.J. have in common…they both did it.