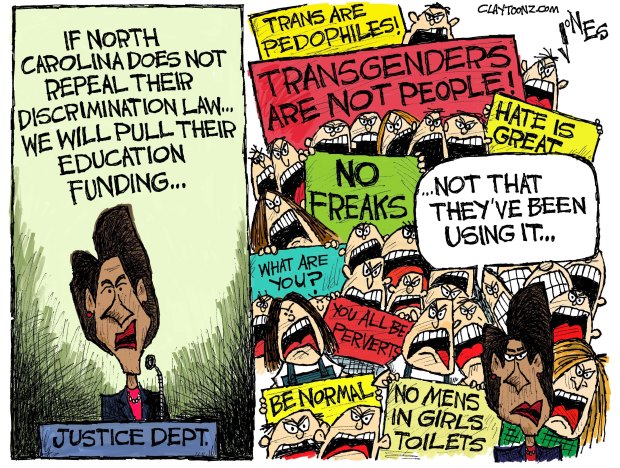 I believe in this time of such turmoil over transgenders in North Carolina’s public restrooms we should all heed the words of North Carolinian Petey Pablo who sang “North Carolina! C’mon and raise up. Take your shirt off, twist it ’round yo head. Spin it like a helicopter.”

Actually, that doesn’t have anything to do with this. I’m just screwing with you.

Attorney General Loretta Lynch gave North Carolina a Monday deadline to promise not to enforce their discrimination law that targets transgenders use of public restrooms. The state asked for more time and Lynch offered a week if they would admit the law was discriminatory. The the state said no and promptly sued. The federal government is counter suing.

The Justice department claims the law violates the Civil Rights Act and that it is “state-sanctioned discrimination” against transgender people.

Pat McCrory, governor of North Carolina, said he has a different interpretation of federal law than the federal government. OK, then. See you in court. It’s going to be very expensive.

The Obama administration is threatening to pull education funding from the state which comes to $4.3 billion. The governor, who is backing a law bullying transgenders, says the feds are being bullies. Go figure.

Lynch, who like Petey, is from North Carolina said states should not be in the business of “legislating identity” and force transgender people to not be who they are. She compared this fight to others over civil rights and human dignity. So many have forgotten the battles over the Jim Crow laws that came after the Emancipation Proclamation; the widespread resistance to implement the 1954 Supreme Court ruling that found segregated schools unconstitutional; and the state laws that prevented same-sex couples from marrying in much of the country until last year. The people who fought for change were on the right side of history. The people supporting this very stupid, idiotic, law in North Carolina are on the wrong side.

When people support legislation today that promotes discrimination and hatred, they show which side of the line they would have stood during the 1960’s.

Loretty Lynch laid down the law Monday with grace, class, and dignity, something the Republican leaders in North Carolina seriously lack. Do you remember when Republicans were ecstatic over Eric Holder leaving the Department of Justice?

They should just toss this law and spin it around their heads like a helicopter.