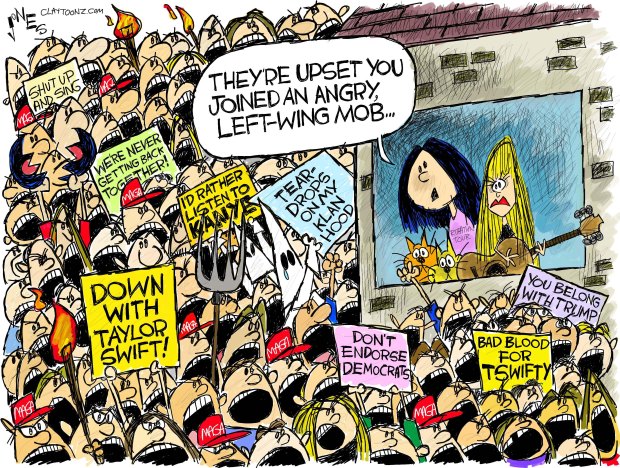 Republicans don’t have a sense of irony, which is why they and Donald Trump, a guy whose businesses were supported by Russian money laundering, has connections to the mafia and makes each day of his administration a third-rate episode of The Sopranos, is accusing Democrats and liberals of being a mob. It’s also hypocritical that they accused the Democratic Party of running on hate while they’re telling their supporters to be afraid of Muslims, Mexicans, black athletes, teenagers, and women who speak their minds.

Sure, Trump and the GOP aren’t talking about the type of mob that is the mafia. They envision more of a pitchforks, torches, and converging on the castle to destroy Frankenstein’s monster type of mob when they say “mob.” Now that Trump has used the term, “angry left-wing mob” to describe Democrats, it has become a new talking point for Conservatives. Prepare yourself to hear it echoed repeatedly, like “fake news,” “no collusion,” and “snowflake.” To make matters worse for them, America’s most popular pop star has joined the “angry left-wing mob.”

Swift has been mostly silent on political issues so it came as a shock to conservatives, though she’s made plenty of hints in the past. After Obama was elected in 2008, she said, “I’ve never seen this country so happy about a political decision in my entire time of being alive.” She came out for gun control earlier this year, and in 2017, she was on Time Magazine’s Person of the Year cover as one of the “silence breakers” fighting back against sexual harassment. The warning signs were there, conjobs.

But, some have taken Taylor’s leftist and rational views with a broken heart, especially the 4chan crowd (a message forum that’s really racist and pro-Trump). You see, for a long time white supremacists have built a myth that Taylor Swift was one of them. She’s very white and blonde, so…duh. It must have really destroyed them to read her comment, “I believe that the systemic racism we still see in this country towards people of color is terrifying, sickening and prevalent.” One 4chan user posted a meme of Pepe the Frog crying. Not only is it a dangerous time in America for horny, young, white men, but also hazardous to racist cartoon frogs.

In the past, conservatives doctored photos of her wearing a MAGA hat and her with Hitler quotes, as though she was reciting them. One headline at the Daily Stormer (a Nazi site popular with Republicans) read, “Aryan Goddess Taylor Swift: Nazi Avatar of the White European People.” If you know anything about conservatives and memes, well, that’s where they get most of their information. For Republicans, racist, lying memes are scripture. It’s why they were and still are such easy cattle targets for Russian troll farms.

Believing Taylor was one of them based on memes of Nazi quotes and MAGA hats may sound ridiculous, but the kitty rational is outright absurd. The kitty what? Yeah, check this out: Many 4chan users believe they named Taylor Swift’s cat. Yes. Her cat. Meow.

How did they arrive at such delusions of grandeur? They had a cat-naming contest (I don’t know why and I’m afraid to look it up. I like dogs) and one of the winning names was “Meredeth,” which is a much better name for a kitten than Eva Braun. Later, they discovered that was the name Swift chose for her new kitty. So, there you have it. Taylor Swift has a Nazi Kitty, and she let the hater rubes over at the 4chan name it for her. It’s just too bad she named the cat before the contest, but this is 4chan. Details. Schmetails. Heil, Kitty.

While Republicans say Swift’s endorsement won’t have any impact (as though Kanye’s will), Vote.org has reported a huge spike in voter registration since yesterday. Normally, they get about 6,000 a day. Yesterday, they received 65,000. Sure, there could be a natural uptick because we’re within 30 days of the election and the registration deadline is fast approaching, but the website is giving most of the credit to Swift.

Swift has influence. When Apple made the decision not to pay artists during an initial three-month free trial period of their new streaming service, which would have mostly affected up-and-coming artists, Swift wrote a nice letter to Apple at 4:00 AM and they changed their policy. They didn’t want to fight with Tswifty.

She came out about being sexually assaulted after the guy who assaulted her, get this, sued her (he lost because he didn’t have a jury made of old, white, U.S. Republican senators). That inspired millions of other women to come forward.

Yesterday, Trump said he likes Taylor Swift about 25% less now. What a coincidence, because now I like her about 25% more.

Note: I didn’t go to 4chan or the Daily Stormer for any of this research. I physically can’t as I already get nauseous when Trump comes in TV. It’s also why I won’t post links to them on my site. Ew. I did my research through other sites.