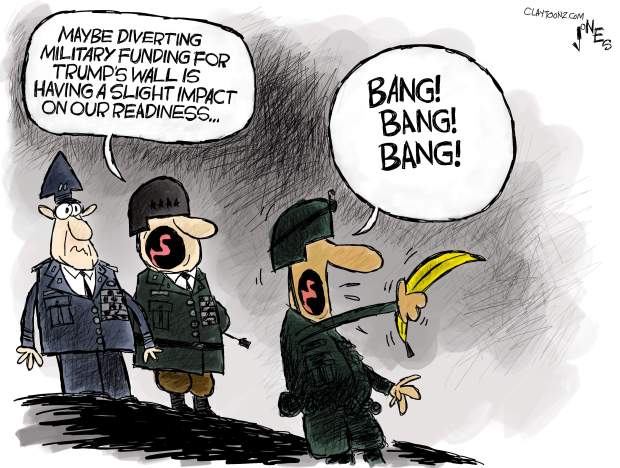 Let me make something clear to you. Immigration, legal or otherwise, is NOT the greatest danger or challenge facing this nation. Sure, if you’re a white nationalist like Stephen Miller believing in the Great Replacement theory and that white people are systematically being phased out, more people in this nation who don’t look like you will keep you up shivering and perspiring with fear all night as if you had the meat sweats.

The Trump administration is treating immigration, legal and non-legal, as the second greatest threat facing this nation behind people fact-checking Donald Trump. But even if immigration was the greatest danger we face, building a wall on the border with Mexico is NOT the solution. It’s been pointed out again and again that the majority of people in this nation illegally entered legally and through checkpoints, not by sneaking across through the desert. The majority of guns and drugs entering this country come through legal checkpoints. People in this nation illegally do pay taxes and contribute more than they take. Very few immigrants are taking jobs away from U.S. citizens. These are facts. So, building a great big wall is a stupid idea that’s not a solution. But stupid ideas work on stupid people.

Stupid people bought the promise that Trump would build a wall and make Mexico pay for it. They’ve proven they’re so stupid that when the promise is broken and they’re the ones paying for it, they will still support it. If you support Trump based on his broken promises (or for any reason actually), you’re stupid. If you’re in the military or in a military family and you support Trump, you may be the dumbest ones of all.

They support Trump despite him turning speeches before them into political rants and attacks on people who criticize him. They support him despite him lying to them about their raises. If you had a new boss take credit for giving you a raise that someone else give you, lie about how much you received, and claim it was the first you’ve received in years when it wasn’t, would you celebrate what a great boss he is and start wearing an ugly hat with his name on it? Or, would you realize he didn’t respect you at all because he believes you’re too stupid to notice differences on your paycheck and in your bank account? I guess you may be if you believe Trump when he says not to believe what you see and hear.

Would they have supported him if he started his campaign saying, “I’m going to build a wall by diverting military funds for its construction”?

Tyndale Air Force Base in Florida was heavily damaged by Hurricane Michael. Trump went to the base and told the personnel, “I pledge to you unwavering support and the support of our nation until you have fully recovered and rebuilt and we will never ever leave your side.” About that. He’s taking $17 million from that project for his wall. That’s not “unwavering” support. That is totally “leaving their side.” For Trump, “never ever” means nada.

Trump is even taking money from military projects in border states, such as Arizona for his wall. Fort Huachuca in that state currently has a $30 million restoration project in the works that is now stalled because of Trump’s theft from the military.

An engineering center along with supporting structures at West Point was deemed so important, that the graduating class of 2009 voted to gift the school with $750,00 for the project. Now, they’re donating to a project the government is stealing from. Trump is taking $160 million from the project for his stupid wall. Graduate Benjamin Hass said, “President (sic) Trump’s decision to divert funds away from this center in order to pay for the border wall demonstrates his disregard for true national security threats and his fixation on a project that will solve no national security issues.”

That’s it right there. Immigration is NOT a threat to our national security yet Trump is taking billions intended to support those who protect us to fund his racist vanity project. Climate change is a greater threat to our national security and the Pentagon (in case you’re a Republican, that’s the military) has issued a report laying out how climate change is a national security threat. Imagine the reaction if President Obama, citing the Pentagon’s report, diverted funds from the military to combat climate change. Republicans would be screaming how he was disregarding Congress’ Constitutional role in appropriating funding. They’d accuse him of acting like a king or a dictator. Actually, they did accuse him of that.

But Donald Trump, he can take money from the military, disregard national security, stomp all over the Constitution, lie about it while doing so and Republicans and military people will keep supporting him.

Gwen Stefani said it best. This shit is bananas. B-A-N-A-N-A-S!