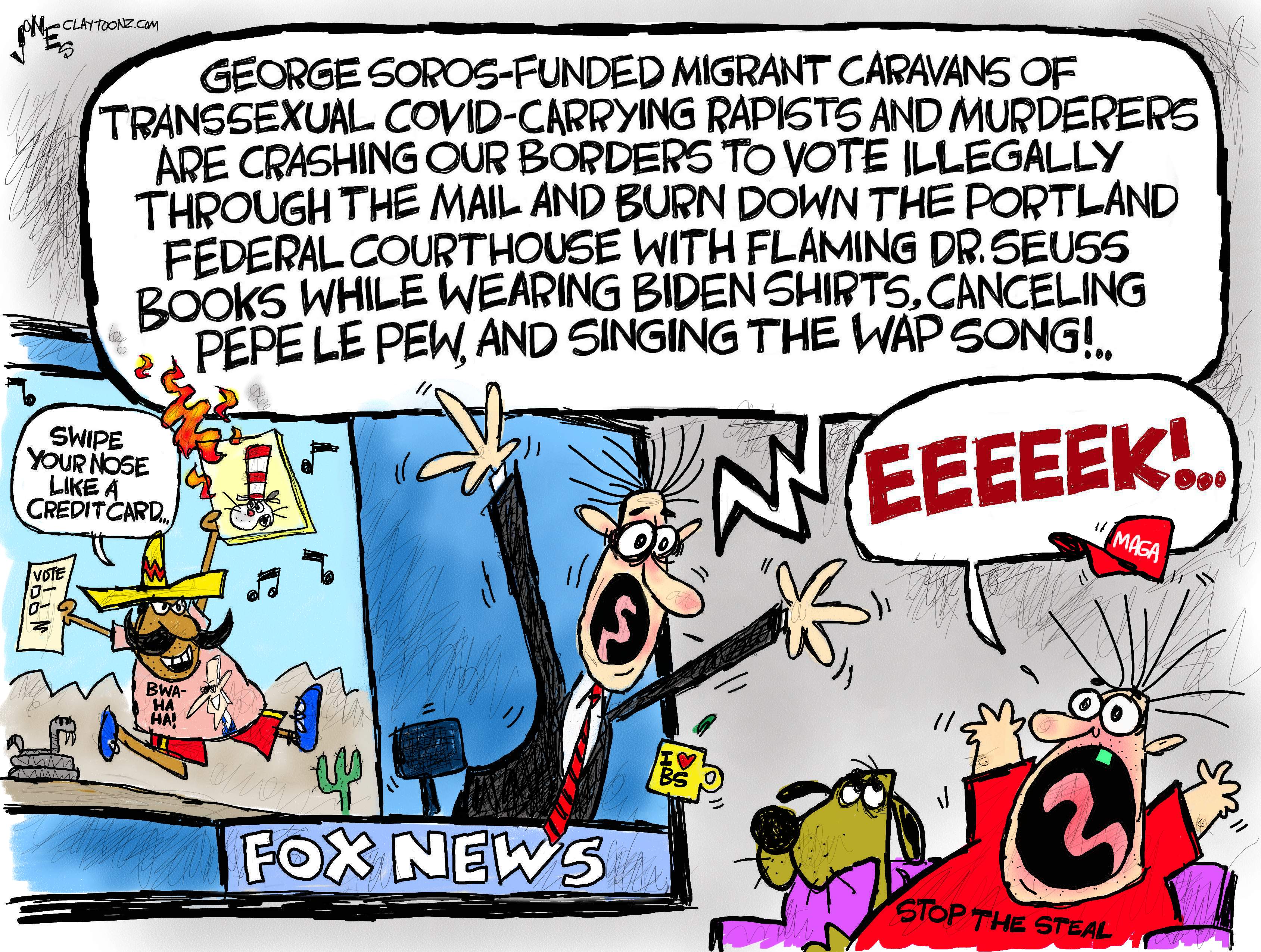 So, just how many Fox lies can I insert into one cartoon?

I got George Soros-funded migrant caravans, Mexico sending rapists and murderers, the border being crashed by covid-carriers, illegal immigrant voters, attacks on mail-in voting, voter fraud, the Big Lie over the stolen election, Dr. Seuss and Pepe Le Pew being canceled, immigrants wearing Biden shirts at the border, attacks and fear-mongering over LGBTQ, and false equivalencies between vandalism at the Portland Federal Courthouse and actual Trump terrorists attack the United States Capitol. On top of all that, I got conservative outrage over the WAP song. I’m sure I left something out.

And this cartoon is why I don’t unfriend or block MAGAts on Facebook. Seeing several of the troglodytes creating posts on already debunked bullshit, then seeing the exact same thing again and again from conservative political cartoonists, teaches me exactly what’s being discussed at Fox News without having to actually watch Fox News.

Several years ago, there was a poll that showed people who watched the Daily Show were more informed than viewers of Fox News. I totally believe that and I know it’s true. To be effective at satire, you need to know what’s going on. You will actually be more informed reading the Onion, Andy Borowitz, and my cartoons than you ever will be by watching Sean Hannity, Jeanine Pirro, Laura Ingraham, or Tucker Carlson. And I’m not trying to say my cartoons are all that, but Fox is all suck.

Fox News is also poison. Not only do they spread lies, but they fear-monger to the point that people use the lies to validate their racism and terrorism. David Duke and other white supremacists say Tucker is must-watch TV for them. And when you have stars of your network speaking at Donald Trump’s hate rallies, with one of them having nightly phone calls with him, then you’re no longer a news channel…you’re propaganda.

People talk about the political divisions in this country, partisanship, and tribalism. I admit that I contribute to the division, but I don’t need to use bullshit to do it. Fox News lies. Fox News even tells you that you can’t trust Fox News.

When defending Tucker Carlson in court in a libel suit, Fox News’ lawyers successfully argued that you can’t believe anything Tucker says. Executives at Fox News are now describing themselves as the “opposition” to the Joe Biden administration. An actual news agency shouldn’t be the opposition or ally to politicians. What happened to “fair and balanced?” Sure, that wasn’t ever true but when you tell a lie, you gotta stick with it. You have to make sure your lies don’t expose your previous lies. Did four years of being Trump TV make Fox News dumber?

Do yourself and your country a favor. When you walk into a business, whether it’s a garage, restaurant, bar, doctor’s office, or strip club, and they’re playing Fox News on their TV, walk out or tell them to change it. I have actually sat down at the counter at a Denny’s and told them they had to switch their TV from Fox to another network or turn it off, or I wasn’t buying their pancakes. Just like there are other options for news, there are other pancake options.

Except, Fox News isn’t news. If you switch to CNN, MSNBC, or BBC, you’re not going to another option for news from Fox. If you want an option to Fox, you go to Newsmax, One America News, or Duck Dynasty. There are now competition and options for bullshit and hate propaganda. It’s a great time to be a white nationalist terrorist in the United States. In addition to having hate propaganda and other racist entertainment, there are members of the United States Senate who are your friends and supporters.

Sometimes a conservative will come at me for criticizing Fox News, asking when was the last time I gave the network a chance. But I don’t have to give it another chance. It’s been a long time since I put ketchup on a hot dog and I don’t need to do it again to know that it’s wrong, terrible, un-American, and something that’s only for troglodytes without taste, class, sophistication, or culture.

I get my news from actual news sources and I get my Fox News bullshit from Facebook.

Creative note: I woke up late at 7:30 A.M. without a cartoon idea. I had three subjects in mind and then got ideas for two of them…but not on the border lie Fox is spewing. This is the subject I wanted to hit today. Then I got the idea but I still had to write it. So I wrote it, thought of all the Fox silliness I could include, Googled some shit, Googled some more, made a list, framed it into a long sentence, rewrote the sentence, restructured, rewrote again, lettered it all, shifted some of the lines around in Photoshop, enlarged the text a little, and then sent it to my copy editor Laura who told me I left out an “s” in “transsexual.”

About the WAP song: I really don’t care. Sure, it’s nasty and it’s probably horrible music (I only heard a piece of it months ago), but I do love that it infuriates conservatives. Why do conservatives spend so much time watching, reading, and listening to stuff they hate? That would be like me watching Tim Allen’s sitcom while eating a hot dog desecrated with ketchup.