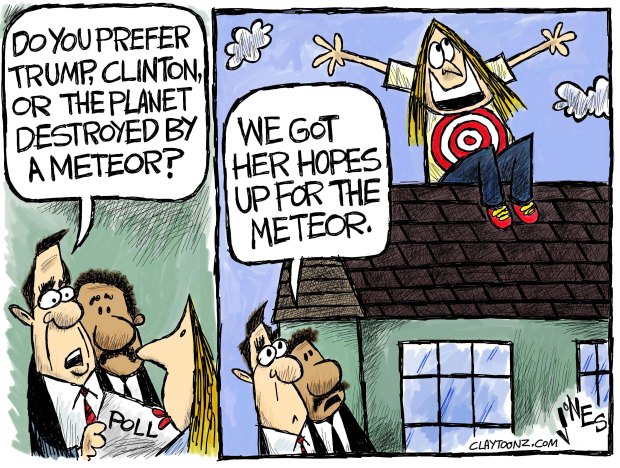 In the 1980’s one movie so bad that is was almost good was Night Of The Comet. It’s about a comet wiping out the entire planet except for two teenage girls. Mutant cannibals and other survivors with nefarious intentions show up while the girls and a guy they meet run wild shopping in Los Angeles. I’m sorry to inform you the movie totally lacked sex and gore. Your kids can watch it. If this movie was made in 2016 the two girls wouldn’t notice humanity has been obliterated because they’d be too busy taking selfies.

I’m sure if a comet did wipe out the planet then only two of the survivors would be Donald Trump and Hillary Clinton. And Seth Rogen. That would suck.

A new Washington Post/ABC News poll gives Donald Trump an unfavorable rating of 51%. Things are only a little better for Clinton who is disdained at the moment by 34%. She’s two points higher in likability. Hillary Clinton’s great fortune is her opponent is Donald Trump. But still, there’s not a lot of bragging rights to being preferred just 11% higher than an egotistical, pathological lying, blowhard, ignorant, stupid racist with comical hair and an orange spray tan. These are Idi Amin numbers.

There was another poll last week asking people which would they prefer: Clinton presidency, Trump presidency, or planet destroyed by meteor. Public Policy Polling conducted the poll and 43% picked Clinton, 38% picked Trump and planet-destroying meteor got 13%. Seven percent were unsure. Maybe they wanted more details like: would it be a quick and painless death? Do I have time to make one last Facebook status? Will I at least be able to watch Seth Rogen die? I mean seriously, we don’t need Seth Rogen. We have Jonah Hill. They’re basically the same person.

I think we can call people who’d prefer death by meteor over a Trump or Clinton presidency, glass-half-empty-people. That’s some pretty negative expectations and outlook for the future.

I’m not a fan of Hillary Clinton but I still believe our nation has a great future ahead with her as president. We’re moving in a progressive direction and I don’t think she can mess that up too much. There will be aspects of it I won’t like. There will be scandals, congressional investigations, special prosecutors, and moments of cringe-worthy embarrassment. Wall Street will love it. I still prefer her over Trump.

I’m not worried about a Trump presidency because it’s never going to happen. I guess I’m a glass-half-full-person because I can’t believe my country is stupid enough to give the White House to an Oompa Loompa troll. Even if Trump does win the presidency I would probably be more concerned with his V.P pick as Trump will be impeached. Trump believes he’s above the law now. What’s he going to try to get away with as president?

I can understand the negative and hopeless outlook for people who believe Hillary Clinton is just as bad or worse than Trump. I mean, if the only options were Trump or meteor, I’d consider the meteor….if I was a normal person.

I’m not a normal person though. I’m a political cartoonist. Can you imagine the fun I would have with a Trump presidency? I mean, at least before he had me imprisoned, or accused of being Mexican and deported after someone tells him where Mexico is located.

Or he’d throw me in a cell with Seth Rogen. I’m gonna put some more thought into that meteor thing.