In early 2022, Donald Trump asked one of his lawyers to tell the National Archives that all of the material they were seeking had been returned to them and none were remaining at Mar-a-Lago. The lawyer refused to do that.

Trump attorney Alex Cannon facilitated the January transfer of 15 boxes of presidential records from Mar-a-Lago to the National Archives, which they had spent over a year trying to get. Cannon had been an attorney for the Trump Organization and the Trump Campaign before joining Trump’s post-presidential (sic) legal team, so this guy had the experience to know that most things Donald Trump says are flat-out lies. So, he refused to tell the National Archives that they had received all the documents and none were left at Mar-a-Lago. It was a smart move because as we know now, it was another Trump lie.

An attorney who lies in court or to the government can lose his or her law license. For lying to the FBI and Justice Department, an attorney can go to prison. I’m not sure what lying to the National Archives can get you but doing so as a legal representative may land you in hot water.

As it turns out, the 15 boxes that were returned were packed by Trump himself, which is really weird. Trump never does anything himself, like with his own hands, unless it’s something corrupt…like drawing on hurricane maps with Sharpies.

Trump also dictated a statement for his team to release publicly that said “everything” had been returned. Sources say he complained that the National Archives were being “persnickety” over this material. But his team didn’t want to release that statement because like Cannon, they weren’t certain it was true. And like most things with Trump, it wasn’t. Instead, they released a statement saying Trump had given boxes of materials to the archives in a “friendly” manner. It did not say that all of the materials were handed over.

More documents from Mar-a-Lago were returned in June, and the FBI presented a search warrant on Mar-a-Lago in August.

Being an attorney for Trump comes with criminal liability. Ask Michael Cohen, Rudy Giuliani, Sidney Powell, and John Eastman. Trump attorney Christina Bobb, signed a certification that a “diligent search” was conducted and that “any and all” documents were produced to the government. That was a lie. Evan Corcoran, another Trump attorney, made statements to the FBI during one Mar-a-Lago visit that also turned out not to be true.

The New York Times reporter, Maggie Haberman, interviewed Trump for her new book, “Confidence Man,” in 2021. She told the Times she asked Trump “on a lark” whether he had taken any memento documents from the White House. Trump told Haberman, “Nothing of great urgency, no,” before bringing up the Kim letters unprompted.

Trump said, “I have great things though, you know. The letters, the Kim Jong Un letters. I had many of them.”

Haberman asked a follow-up question (something Fox News goons never do): “You were able to take those with you?”

She asked him if he took anything and he brings up the Kim Jong Un love letters, then says he doesn’t have those. Bullshit.

Trump bragging about what he has reminds me of the lyrics to the song “Intimate Secretary” by the Raconteurs.

I’ve got a rabbit, it likes to hop
I’ve got a girl, and she likes to shop
The other foot looks like it won’t drop
I had an uncle and he got shot
I’ve got a red Japanese teapot
I’ve got a pen but I lost the top
I’ve got so many things you haven’t got

The lyrics are sung from what sounds like the perspective of a very juvenile, stupid, and pathetic person that you should feel a little sorry for. In the real world, I don’t feel sorry for Trump.

One thing Trump has that I haven’t got is a prison in his future.

Note for the regulars: I’m going to Ohio this week for the usually-annual convention of the Association of American Editorial Cartoonists. For you, that means some or all of the blogs will be shorter than usual between tomorrow and Monday. Please try to survive.

Music note: I listened to U2, the Vines, and Jet. 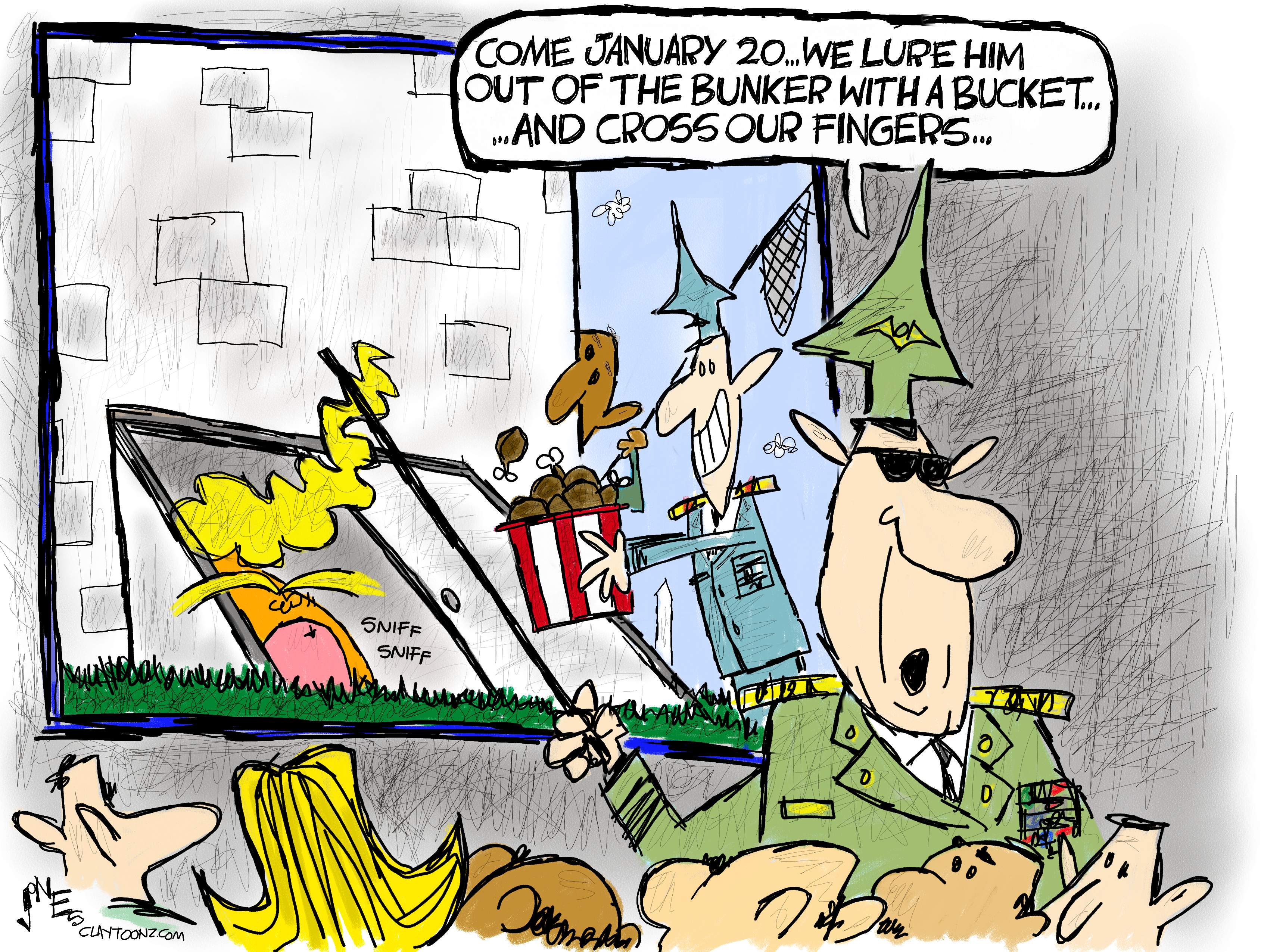 Since Donald Trump projects, naturally he’d spend a week hiding inside the White House after spending months claiming Joe Biden was hiding in his basement.

When Joe Biden was staying home and wasn’t on the campaign trail, it was so he wouldn’t put lives in danger by campaigning. When Trump stays home hiding, it’s because he’s embarrassed that in the 2020 presidential election, he got his big orange ass handed to him.

Donald Trump held rally after rally, subjecting thousands to the coronavirus, and he still lost the election. Today, his followers will descend upon Washington for an anti-democracy protest.

Trump’s MAGAts are protesting under the pretense that the election was stolen. It wasn’t stolen. If anything, they’re trying to steal it. I know counter protesters will want to show up to make their voices heard as the MAGAts claim there will be a million of them, but please…if you’re opposing these people, stay home.

There will not be a million MAGAts in the district today. Maybe a few thousand. Most of them will not be masked. Liberals in Washington are very good at wearing masks. But this time, let the idiots have the streets. This could be another Trump super-spreader event. Let them hack on each other, not you. I’m blaming the possibility of having covid on MAGAts I saw on the metro giving me the stink eye for my RBG mask.

What these MAGAts want is a fascist ruler, not a democratic system. It’s what all Republicans want. And as they march around outside the White House, they know Donald Trump will be inside…hiding.

Donald Trump is hiding from reality. He’s hiding from facts. And he may be afraid to leave the White House as the locks may be changed while he’s out golfing. I hope it rains.

Donald Trump will never admit he lost the election. He may spend the rest of his life claiming he’s still president. They may even have to drag him out of the White House kicking and screaming.

I’m good with that. I wouldn’t mind seeing Donald Trump dragged out of the White House. But whoever has to do the dirty deed, remember…wear a face mask. These people are nasty.