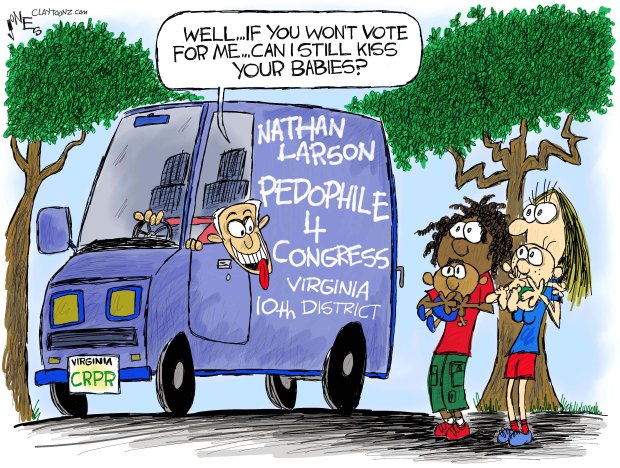 Usually, when you send a pedophile to Congress, you don’t know they’re a pedophile until much later. In this case, Nathan Larson has boasted he is a pedophile, among many other horrible things.

Larson is an Independent congressional candidate for Virginia’s 10th District. Shockingly, he’s not running as a Republican. Of course, there’s no chance in hell the guy could actually win, but if he’s going to pull any votes from one of the two parties, it’ll be the Republican Party.

Larson boasted to the Huffington Post that he’s a pedophile. He’s also written about it online in addition to bragging about raping his late ex-wife, who has since committed suicide.  He said, “A lot of people are tired of political correctness and being constrained by it.” I don’t think it’s political correctness that prevents most people from raping women and children, or commit father-daughter incest, which he’s also into. And, yes. He has a daughter that the law is wisely keeping him away from.

From HuffPost; In his manifesto, Larson called Nazi leader Adolf Hitler a “white supremacist hero.” He urged Congress to repeal the Violence Against Women Act, adding, “We need to switch to a system that classifies women as property, initially of their fathers and later of their husbands.” He also showed sympathy for men who identify as involuntary celibates, or incels, suggesting it is unfair that they “are forced to pay taxes for schools, welfare, and other support for other men’s children.”

There are at least eight white supremacists running for office this year in the nation, and my Virginia might have the worst. On top of all this, Larson is a convicted felon who threatened to kill the president in 2008, near the end of Bush’s term, so I’m not sure if he was aiming for him or Obama. Felons normally lose their right to vote and run for office, but Virginia’s former governor, Terry McAuliffe, restored them in 2016.

Donald Trump has already endorsed one pedophile this year. He’s also praised white supremacists and exhibited his own racism while also publicly lusting after his own daughter. The only issue he might have with the sort of scum like Nathan Larson is he’s not a Republican.

This is the ninth cartoon I’ve drawn this week. Two haven’t been published yet (Sunday and Monday. You have to wait). I’m not going to draw anything tomorrow (Saturday). At least I don’t think I will. I plan to watch movies and restring guitars.

I’ll probably cover the Duggar issue again and focus on the hypocrisy in the situation. I’ll probably write about it too.