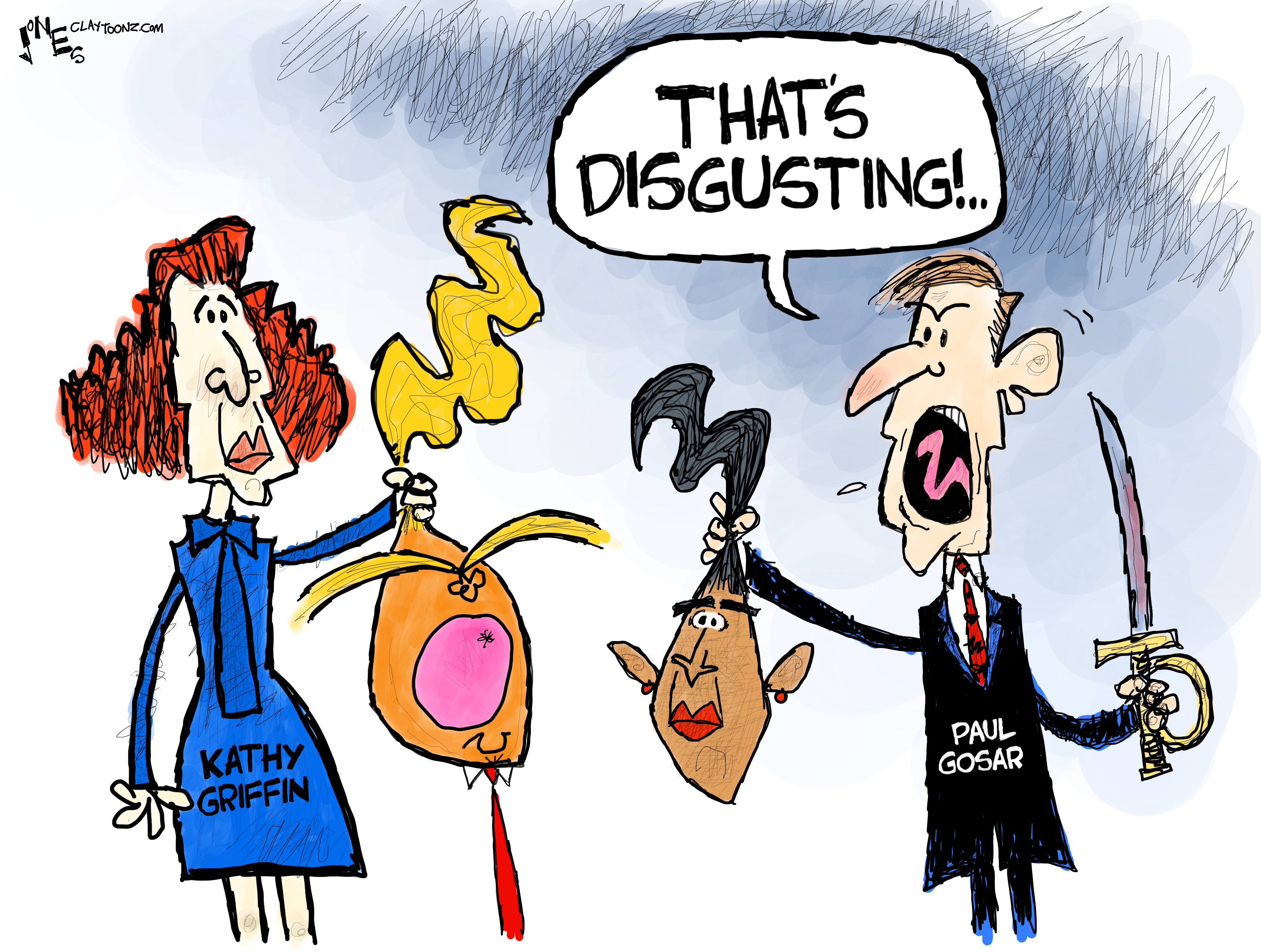 You can not be tribal without being a hypocrite.

If you only go after people who are on the other side of you politically but give others who have committed the same offense a free pass because they’re in your tribe, you’re a hypocrite.

If you spent eight years attacking President Obama for playing a lot of golf, then spent the next four years blind to Trump playing a shit ton of golf, even after he promised he wouldn’t, and ignored that he made taxpayers pay for his golf, giving him a huge profit from it, then you’re a hypocrite.

In case you have a short memory like Republicans do about who created the economy Trump inherited, or that Trump increased the national debt by $2 trillion, or Trump created the border crisis, inflation, the supply-chain issue, and the Afghanistan pullout, or that Trump played down the COVID pandemic, or that entire Trump golf thing, then let me refresh your memory on the Kathy Griffin headless Trump crisis.

After Ms. Griffin’s photo stunt with the ketchup Trump mask, you can probably guess how Republicans reacted. They all joined as one and defended Kathy Griffin’s freedom of speech and demanded the media not to act like a woke mob and cancel her. They called everyone who criticized the stunt a “snowflake” and to grow up. #SaveKathy was the hashtag shared by every Republican in Congress. And then they all set out to feed the homeless, protect the environment, add more vegetables into school lunches, and save Michelle Obama’s White House garden.

OK, I may have made a few of those things up.

The Republican National Committee published a statement saying, “Kathy Griffin’s career was over long before she attempted to make a disgusting joke about decapitating the President. Playing the victim and blaming others for her hateful actions today, and claiming to be (bullied) is a bridge too far.”

The California Republican Party sought donations for Kathy’s “disrespectful” photo and asked donors to contribute to the fight against “the left’s blatant disrespect.” They also published the photo in their solicitation condemning the publishing of the photo.

A lot of Republican cartoonists used the same image to condemn the image.

Trumpy Jr tweeted, “Disgusting but not surprising.” He also said, “This is the left today. They consider this acceptable. Imagine a conservative did this to Obama as POTUS?” Jr, We don’t have to imagine.

Jr and other Republican shitheads demanded that CNN fire Kathy from her annual gig as cohost, with Anderson Cooper, of their New Year Eve show.

Republicans got exactly what they wanted and CNN fired Griffin. After that, Jr. tweeted Griffin should receive more punishing. And she got more punishment.

Griffin didn’t just lose her CNN gig, she had multiple bookings at comedy clubs canceled. Nobody wanted their club burned down for booking Kathy Griffin. She was also placed on the no-fly list for two months. She was investigated by the Secret Service, and threatened jail time for a “conspiracy to kill the ‘president.'” She also lost a book deal and probably quite a few friends.

Al Franken, who was senator at the time and later canceled by his own party, condemned her actions. This only reminded Republicans that Franken and Griffin were old comedy pals, and they started attacking him for knowing her.

Even Melania, who was usually silent about famous people bullying and insulting, like her husband, attacked Kathy Griffin.”

Democrats criticized Kathy Griffin for her stunt. Hardly anyone defended it. But, Donald Trump Jr told us to imagine the reaction if a conservative did what Kathy did. We know that his party wouldn’t give a rat’s fuck over it. In fact, they’d remain silent.

Republicans got everything they demanded with Kathy Griffin, and the ketchup-Trump-mask stunt isn’t even the worst thing she’s ever done. Have you seen “Shrek Forever After?” It was the worst Shrek. I was going to use the 1998 Godzilla, but that was Vicki Lewis. Until now, I thought Ms. Lewis and Ms. Griffin were the same person.

Republicans were afraid Kathy Griffin was threatening to kill Donald Trump. The party could not find any of their members they had faith in that could stop Kathy Griffin on a murder rampage. These are the same fuckers scared of Big Bird, Greta Thunberg, and broccoli.

On Monday, Representative Paul Gosar tweeted out some weird altered anime video of him cutting off the head of his colleague Alexandria Ocasio Cortez…and murdering President Joe Biden. So far, Don Jr has been silent with his outrage.

The only Republican who has expressed disgust over this has been Representative Adam Kinzinger.

House Minority Leader has been asked to condemn this but so far, like when Marjorie Taylor Green issued death threats to Leader Nancy Pelosi and AOC, he’s remained silent.

Republicans are NOT going after Gosar for doing the very same thing they attacked Kathy Griffin for…except Gosar’s attack threatened more people. They have not spoken out against this because they are hypocrites and Republicans don’t believe hypocrisy applies to them.

Ever Gosar’s siblings have criticized his actions. His sister, Jennifer Gosar, said he was expressing his “sociopathic fantasies.” Along with her five other siblings, Jennifer endorsed Paul Gosar’s opponent in his last election. I can relate as I have two siblings I don’t talk to, but in our case, they’re Paul Gosar.

When a very public personality like Paul Gosar exhibits sociopathic fantasies about murdering a co-worker, much more deranged sociopaths may take his cue and exhibit not just weird murderous sexual fantasies, but actions. This is dangerous shit and Gosar should be removed from office. Gosar is not qualified to serve in Congress. Unfortunately, the entire Republican Party is controlled by and full of sociopaths.

Before taking his video off Twitter to pretend it never happened, Gosar told everyone to relax because it’s “just a cartoon.”

Yeah, and Kathy Griffin’s stunt was just a mask covered in ketchup.

“Woe unto you hypocrites,” Jesus said to the religious leaders of his day. In 2019, his message is for the likes of Franklin Graham, a religious right phony who sees sin in Democrats and not Republicans.

Just like Donald Trump, Franklin Graham inherited his empire from his daddy. He has since used his religious podium to endorse the 2003 invasion of Iraq, refer to Islam as “a very evil and wicked religion,” accuse President Obama of allowing the Muslim Brotherhood to become a part of the U.S. government (seriously), and in 2016, conduct a $10 million campaign that framed support for Hillary Clinton and other Democrats as anti-Christian. And then, he endorsed the porn-star presidential candidate.

With The Washington Post now confirming that Trump has passed the 10,000 lies mark, Graham says Trump merely misspeaks and never has intentions to be dishonest.

Graham has no problems with Trump being a racist, bully, misogynist, braggart, or a guy who proudly boasts of sexually assaulting women and barging into dressing rooms to see teenage girls while they’re naked.

Graham backed Trump’s Muslim ban and says God had a hand in his election.

And back to Donald, Graham has never preached against defending Nazis. And let’s get this straight right now: Donald Trump defended Nazis.

There’s this campaign that Trump was talking about the “fine people” who were merely at Charlottesville to protest the removal of Confederate statues. Yes, fine people who demanded that statues honoring slave-owning traitors to the United States must remain in place. Trump supporters tell us to look at the context of his words when he said there were “fine people on both sides.” OK. Let’s look at his words.

In defending his statement afterward, he said, “As I said on — remember, Saturday — we condemn in the strongest possible terms this egregious display of hatred, bigotry, and violence. It has no place in America.” He also called the murderer of Heather Heyer a “murderer.” Kudos, Trump. But then, he flipped it back to defending the “Blood and Soil” tiki-torch guys.

He continued with, “What about the fact that they came charging with clubs in their hands, swinging clubs?” Trump’s primary criticisms remained on the left when he brought up permits to protest. He said, “you had a group on the other side that came charging in, without a permit, and they were very, very violent.”

In defending the people who were protesting the removal of statues, Trump said there were “fine people on both sides.” Who was on the side with the statue dudes? Who was in Charlottesville that day?

Airbnb refused to rent to these people because they’re not “fine.” You can’t blame Airbnb, because they’re Nazis and they’ll steal all the white sheets and pillow cases and cut eye holes in them. But, Trump disagrees with Airbnb and thinks they’re fine people.

Donald Trump defended Nazis. Nazis! Nazis! Nazis! Deflecting for Nazis is the same as defending them. And defending Nazis is not something Franklin Graham has a problem with. But maybe, he’d hate gay Nazis.

Graham has a huge issue with gay people. He’s a champion of gay-conversion therapy, just like Mike Pence. He praised Vladimir Putin for Russia’s “gay propaganda law,” which bans anything that makes homosexuality appear acceptable. And last week, he went after South Bend, Indiana mayor and first opening gay Democratic presidential candidate for being gay and married.

Graham tweeted, “”Mayor Buttigieg says he’s a gay Christian. As a Christian I believe the Bible which defines homosexuality as sin, something to be repentant of, not something to be flaunted, praised or politicized. The Bible says marriage is between a man & a woman—not two men, not two women.”

Actually, the Bible doesn’t say homosexuality is a sin. It talks about behavior but doesn’t reference being gay. It talks a lot about a man being with a woman and becoming one, but it doesn’t mention marriage. Don’t believe me? Look it up. I’m no Bible preacher so you’d think a Jesus freak like Graham would have a better grasp of the Bible than an agnostic political cartoonist (I did spend a year at a Baptist private school in Georgia. Hallelujah!).

Graham has never asked Trump to repent that I know of. While worried that Buttigieg is flaunting and politicizing his sexual orientation, he doesn’t have a problem with anything Trump flaunts.

Graham is a hypocrite and quite frankly, his relationship with Trump is unnatural and it kinda freaks me out.