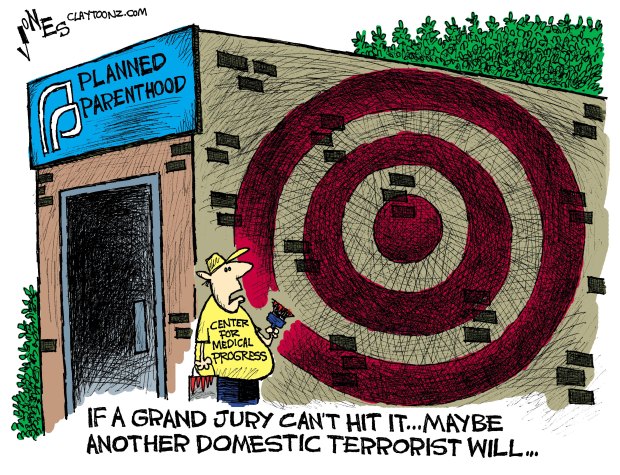 The Center For Medical Progress created a sting operation and videos as bogus as their name. Their accusations that Planned Parenthood was selling and profiting from body parts of aborted children turned out to be a total lie and cleared by eleven state investigations. A Houston grand jury was the latest investigation and instead of delivering indictments on Planned Parenthood, they dished them out to David Daleiden, the head of the faker organization, and one of his colleagues, Sandra Merritt, on a felony charge for using fake driver’s licenses to gain access to a Planned Parenthood facility in Texas. Daleiden was also indicted on a misdemeanor count related to purchasing human organs; Planned Parenthood says it turned down an “astronomical amount” offered by Daleiden to procure fetal organs.

Daleiden uses the defense that he uses the same tactics as journalists. Wrong. Journalism is not about presenting misinformation, no matter what the right wing believes (except on Fox News. There it will get you your own show). It’s also not about activism.

Daleiden’s agenda is to destroy Planned Parenthood. Unfortunately for him Planned Parenthood is operating within the law so to turn public opinion away from supporting the PP, he made stuff up. The majority of Americans support government funding for PP. If you’re a realist, even if you’re anti-choice, you would realize that PP actually decreases the amount of abortions in this country.

If you’re right and your argument is just and valid, then you shouldn’t have to lie. That’s the journalism part Daleiden doesn’t understand. If he gets locked up then he’ll plenty of time to think about it. Maybe he can share a cell with the guy who was so inspired by his videos that he shot up a clinic in Colorado.

Despite the indictments and the many investigations that have cleared PP, several presidential candidates are continuing with the lie. The most egregious being Carly Fiorina (who lies about EVERYTHING) and abducted children for an anti-choice speech and photo-op. Joining her in the lying liars club is Mike Huckabee, Marco Rubio, John Kasich, and Ted Cruz. Maybe Planned Parenthood will look into suing these people for slander and defamation. I think they have a case.

Comics Strip Of The Day used my cartoon and several others to talk about how cartoonists covered the State Island Grand Jury’s inability to see justice. As usual the written commentary by the host is most excellent. Check it out.

Seriously? No indictment from the Staten Island grand jury on the cop killing Eric Garner? It’s on camera. The police say the choke hold was illegal. Forensics said it’s a homicide. Cops really do luck out with grand juries.

We’ve been yelling for body cameras but after this it’s pretty clear no amount of evidence indicts cops, especially when they kill an African-American.

I’ve actually heard some conservatives who sided with Darren Wilson say the killing of Garner was wrong and the NYC cop should be indicted. That just makes me believe that if there wasn’t any video of Garner being strangled then those same conservatives would be siding with the cop and calling Garner a thug. 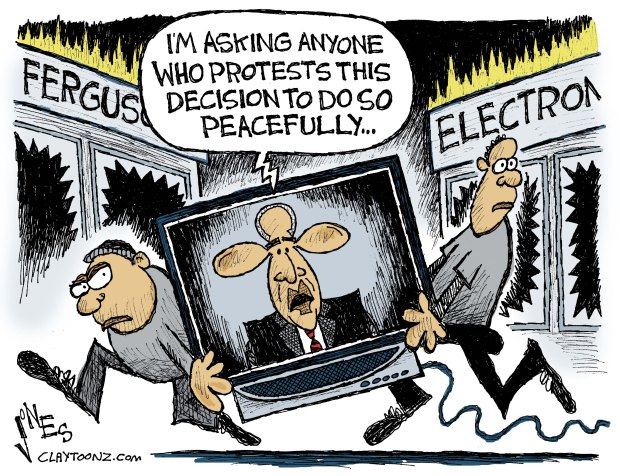 I hate having to hit on this issue. I’m sure many of my usual liberal fans and supporters won’t be very fond of it but I can’t ignore the issue.

Most of us hate to see a riot happen over an issue such as this because it actually distracts from where the focus should be. It also gives credence to those who belittle, ignore and justify police brutality and a justice system that discriminates and totally does not have any concern for a large segment of our society.

One of my conservative friends said Obama was “fanning the flames” by saying he understands many people won’t agree with the grand jury decision. Obama also asked for peaceful protests so I’m not sure exactly how he can be so influential with starting a riot while having no influence toward peace.

My next cartoon will be on the grand jury decision. I’m trying to get my work done early this holiday week, not because I have big plans but because I know most editors won’t be at their desks Thursday and Friday. I already finished my Free Lance-Star cartoon for Sunday and I plan to draw another for The Daily Dot before the week is out.

Here’s hoping I don’t burn out.