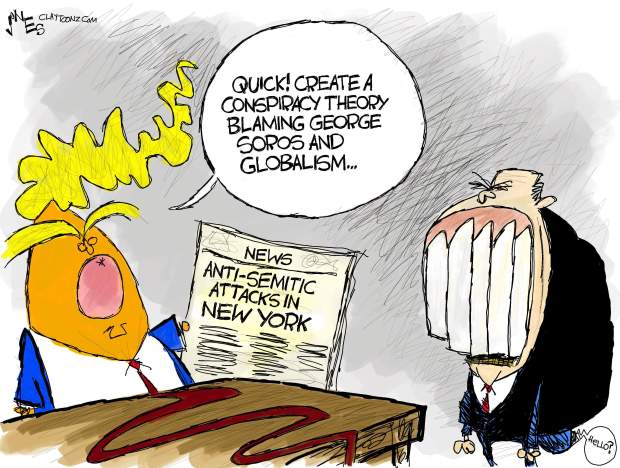 The lie originated (where else?) on social media, where facts are not required, especially on Facebook if you pay to air lies. It spread to right-wing websites. Fox News’ Lou Dobbs, Laura Ingraham, and Maria Bartiromo each suggested the caravan was receiving outside funding (Wink! Wink!). Florida Representative Matt Gaetz, an advocate for all things that are conservative bullshit, posted a video on Twitter of someone supposedly handing cash to migrants to “storm the U.S. border,” and asked, “Soros?”

Then, Donald Trump after claiming “criminals and unknown Middle Easterners are mixed in” with the caravan, started throwing out the idea that George Soros was funding the “invasion.” His reasoning for the claim? “A lot of people say.”

George Soros is a favorite boogieman for right-wingers, white nationalists, racists, your fucknut uncle, and your average neighborhood neo-Nazi. He was a target of the pipe-bomber who was also a Trump supporter. His name was mentioned by the shooter of the Pittsburgh synagogue, who echoed additional rhetoric from Donald Trump, like the threat of “globalism.” Psst: When they say “globalism,” they mean “Jew.” Donald Trump has stood before the United Nations and railed about “globalists.”

Conservatives have spent years gaslighting each other about George Soros. One lie manufactured by the likes of Trump, Louie Gohmert, Matt Gaetz, Roseanne Barr, Alex Jones, James Woods, Dinesh D’Souza, and Larry Klayman is that he assisted Nazis after they invaded his home of Hungary, despite the fact he was a Jewish child at the time evading persecution from them. Republicans can truly be the vilest people one can come across.

Republicans claimed he was funding Occupy Wall Street, the 2017 Women’s march, gun-control activism by survivors of school shootings, and the protests against Brett Kavanaugh. He’s been blamed for the existence of Snopes, a fact-checking site because facts are also evil according to Republicans.

The Daily Telegraph accused him of being involved in a “secret plot” to make voters overturn their initial Brexit decision.

While talking about an arrested suspected terrorist, Turkish President Recep Erdogan said, “who is behind him? The famous Hungarian Jew Soros. This is a man who assigns people to divide nations and shatter them.” At least Erdogan didn’t hide the “Jew” part and wink at everyone.

George Soros is also blamed and accused of manipulating the economy and banks (because he’s rich and Jewish) and of controlling various aspects of the U.S. government, like the State Department and FBI (deep state).

During a rant to Vanity Fair over bloody marys, Rudy Giuliani accused George Soros of being a puppet master, claiming he “elected eight ‘anarchist’ district attorneys’ in the United States,” and is able to control FBI agents and diplomats, such as those in Ukraine. He said Soros was a “horrible human being” who is an “enemy of Israel.” Rudy also said, “Soros is hardly a Jew. I’m more of a Jew than Soros is.” I’m just shocked he wasn’t having those bloody marys with Erdogan.

The antiSemitic rhetoric coming from Trump and Giuliani is as much to blame for hate crimes against Jews as are the chants of “Jews will not replace us” by the Charlottesville tiki-torch Nazis.

Last night, a man barged into a rabbi’s home in Monsey, New York and stabbed five people. In case you’re a Republican (I had to point this out to someone earlier this week), this isn’t just the Christmas season. It’s also Hannukah.

Authorities have yet to determine if this attack was based on anti-Semitism, but c’mon.