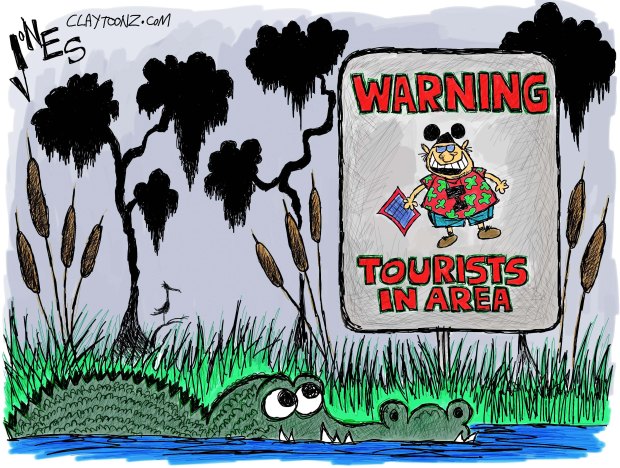 I have drawn more cartoons in the past week with alligators and crocodiles than cartoons with Donald Trump. I’ll try to move on after this unless Donald Trump makes a comment about how much “the” gators love him.

After a child was snatched by a gator in Florida there’s been a lot of debate about how Disney could have prevented the attack. I don’t think there’s much they could have done. Many people point out that Disney does have signs on their property warning tourists about the presence of alligators, but none at the area where the family suffered the tragedy.

During the 2000’s my city of Fredericksburg had a problem with drownings in the Rappahannock River. Most of the drownings were Spanish speaking immigrants. The city put up signs in English and Spanish and it seems to have worked. After several drownings it seems they stopped after the signs went up. Don’t tell Trump because he might send Chris Christie down here to tear them down.

There was also a big issue about cars being towed in the city. Tourists were parking downtown at a convenience store across the street from a very expensive restaurant. There were signs warning that their cars would be towed, but the tourists would ignore them and later write letters to the editor complaining about their vehicles being towed.

Having your vehicle towed isn’t the same tragedy as drowning or being snatched by an alligator, but the comparison is interesting. My editor at the time wanted me to draw a cartoon attacking the tow companies. I thought the towers were a bunch of vultures but at the same time I didn’t want to defend stupidity. My editor argued that the tourists, being from out of town, weren’t as aware of the danger of their vehicles being towed. I argued that they kinda had it coming. There were signs and the tourists were usually from a place like Fairfax, not Guatemala.

The comparison I found interesting is that the Spanish speaking immigrants were good with signs. Stuck up tourists from Northern Virginia, not so much.

The tourists who lost their child are from Nebraska. Would they have paid attention to a sign warning of alligators? Who knows. They don’t have alligators in Nebraska. Nebraska has corn and tornadoes. A Nebraskan might have heard about the danger of large lizards, but kinda shrug it off because who can actually fathom their child being grabbed by an alligator? Alligators are not a common hazard for them.

Louisiana and Florida each has over a million alligators. They’re a larger problem in Florida as that state has more people, more cities, more urban areas, more development, and more tourist attractions like Disney. Louisiana doesn’t have as much development where the alligators hang out. When tourists visit Louisiana they’re more likely visit New Orleans where you’re more likely to be snatched by a transvestite hooker than an alligator. Other dangers in The Big Easy are muggers, stabbers, and corrupt cops. You’d rather face an alligator.

Online couch sitting parenting experts are also saying that Disney should physically remove the alligators. Good luck with that. Male alligators are territorial and they like their own space. They will travel over 30 miles to find it. You can’t fence them out as they can actually climb fences. They’re not real smart (maybe sporting a higher IQ than tourists from Fairfax), but persistent. If Floridians can’t keep them out of their pools how can Disney be expected to keep them out of their lagoons? On top of all that, if an alligator is fed by a human just once, that alligator starts losing his fear of humans and starts associating them with snacks and the next thing you know, you lost a Schnauzer.

Even though alligators are extremely dangerous, it’s very unlikely to be attacked by one unless you’re a schnauzer (another stupid creature. I know. I had one. It once ate a paycheck which it found in the inside pocket of a jacket that was hanging up). Humans are more of a threat to them and probably not as tasty as a schnauzer.

More signs should be put up but honestly, there might be a better chance of the gators paying attention to them than the tourists.