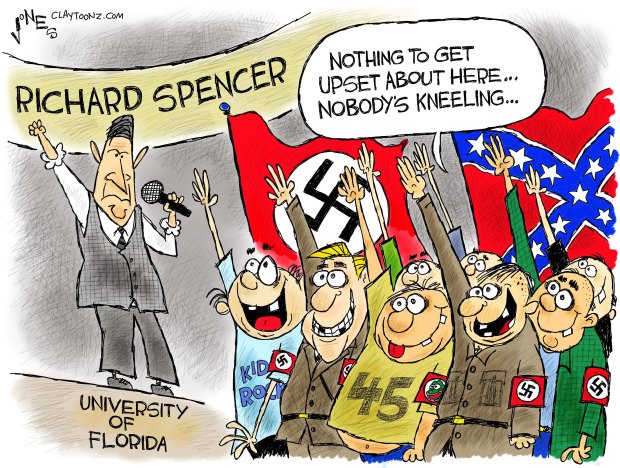 What kind of nation have we become that now when we hear George W. Bush speak, we think, how enlightening and refreshing it is. It has become the kind of nation where the current president calls black athletes protesting racism “sons of bitches” and folks marching among Nazis “good people.”

When Bush spoke last Thursday, what he said was what our current president is incapable of saying…or even thinking. It would disenfranchise his base, plus he’s not smart enough.

During his speech, Bush said, “we’ve seen nationalism distorted into nativism, forgotten the dynamism that immigration has always brought to America,” and “bigotry and white supremacy is blasphemy on the American creed.”

Two former presidents, one Republican and one Democrat, neither would agree on much of anything, except that Donald Trump is bad for America. Donald Trump is blasphemy on the American creed.

Neither president named Trump, but they weren’t talking about your crazy uncle who keeps sharing racist memes and conspiracy theories about uranium deals on Facebook. White House Press Goon Sarah Huckabee Sanders said neither president was talking about Trump because they didn’t mention his name. If you had any doubt the White House is full of stupid people, that should take care of it right there.

One person who isn’t as dense as Sanders on the subject is Steve Bannon. He was furious with Bush. How dare he attack racism and white nationalism. He attacked Bush for reading a speech he didn’t understand and that was probably written by a speechwriter. Let’s forget for a moment that Bannon and his understudy in white nationalism, Stephen Miller has written speeches for Trump, that he can barely read off a teleprompter.

Bannon also said Bush was the “most destructive” president in U.S. history, which is something I would have agreed with before last January.

The Tea Party shouted “I want my country back,” and claimed it was about Obama’s heavy spending. They ignored that Bush had wiped out the federal surplus. They held rallies with Alaskan dingbat Sarah Palin. Today, we have a president who is promising to spend more on the military, a useless border wall, and a tax cut for the rich that will hike taxes on everyone else and increase the deficit by $1.5 trillion over the next decade. He is also attacking the First Amendment, engaging in nepotism, and using the government to fund his businesses. How many Tea Party rallies have sprung up since he took office? How many of those same people have shouted “I want my country back” or expressed any concern over government spending? And, just how bad is Sarah Palin that she didn’t get an administration gig with the rest of the stupid people? They hired Ben Carson for fuck’s sake.

I guess it wasn’t about government debt after all. It was about a black guy becoming president. They were upset about a black man being elected president, but have no concern over a president who benefited from Russian meddling in our election, and continues to deny it ever happened. The people who claimed they wanted their country back gave it away. Do you see why I always say that conservatives don’t get irony?

One person who hates black presidents, black people in general, and is emboldened by the election of Donald Trump is Richard Spencer. Spencer is a white nationalist who once said he wants to “bathe in white privilege.”

Spencer was a part of the Nazi-Tiki march in Charlottesville, and this past week he was allowed to speak at the University of Florida. After the violence and death in Charlottesville, the concern in Florida was so high that the Republican governor declared a state of emergency. The concern wasn’t unwarranted as three men who were making Nazi salutes and Hitler chants shot at protesters.

These Nazi fascists are emboldened. After Trump’s election, Spencer held a rally in Washington, D.C. and shouted, “Hail Trump! Hail our people! Hail victory!” Many in attendance threw up Nazi salutes. In the past, Spencer has said, “the ideal I advocate is the creation of a White Ethno-State on the North American continent.” He’s also stated, “when White men talk about ‘restoring the Constitution’—or, more so, ‘Taking Our Country Back’— leftists and non-Whites are right to view this as threatening and racialist: it implies a return to origins and that the White man once owned America.”

They are only going to get worse. When people asking for equality are “sons of bitches” and Nazis are “good people” in the eyes of the president, we need our elder statesmen to speak out.

It is extremely rare for former presidents to criticize the current president. But right now, remaining silent is criminal. It is dangerous to be silent and allow the white nationalists work to corrupt our democracy.

I want my country back. I also want our former presidents to fight for it with me. Next time, they need to say his name. Don’t let there be any confusion for the stupid people who work in the White House.

This cartoon is my way of punching Nazis in the face.