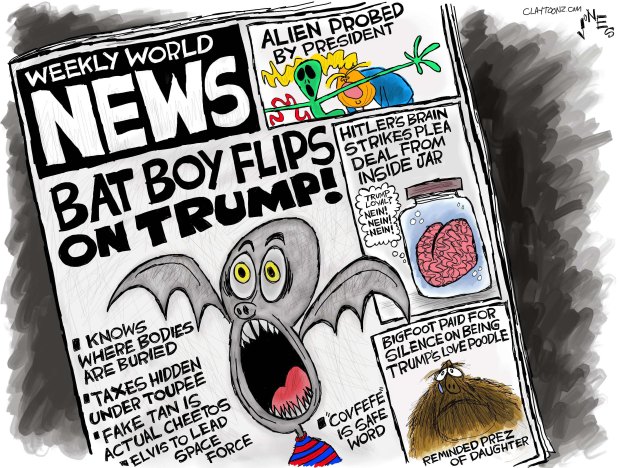 Michael Flynn has flipped on Trump. Rick Gates has flipped on Trump. His personal lawyer/fixer Michael Cohen, who recorded everything, is flipping. His chief financial officer, Allen Weaselburger (actually, Weisselberg. I just like “Weaselburger”) just got immunity after being implicated by Cohen, which will probably implicate a lot of other people, and a few named Trump. Now, Trump has to worry about his leaky pecker.

I’ve always wondered what kind of person believes the stories in the National Enquirer. I’ve also wondered what sort of person would believe anything that comes out of Donald Trump’s mouth. Now, I’m starting to get it.

The gossip rag National Enquirer was supportive of Donald Trump during the 2016 election. They ran front page headlines praising Trump and bashing his opponents. They accused Ted Cruz’s father of having something to do with the assassination of JFK. They ran multiple front pages on Hillary Clinton, claiming she was going to jail, only had six months to live, had brain cancer, was an alcoholic, has a lesbian lover, had a massive weight gain, and that she had framed the Trump family.

The Weekly World News’ headline about Bill Clinton hiring a three-breasted intern was more believable than anything the Enquirer published about Hillary.

The Enquirer also collected dirt on Trump. They investigated multiple stories of Trump’s infidelity…and proceeded to bury each. They enacted a program called “catch and kill,” which was to sign exclusive rights to a story and then bury it. That way, the person claiming they slept with Trump couldn’t tell their story to another publication.

This kind of “journalism” won high praise from Trump, who labels most of the media “fake news.” He said the Enquirer’s publisher, David Pecker, should be in charge of The New York Times and that the Enquirer should have won a Pulitzer Prize. Meanwhile, Pecker was storing all the Trump info in a safe.

After Trump won the election, Pecker became fearful having all the stories in the safe was a liability, so he moved them. To where we don’t know. But, since he, like Weaselburger, was implicated in a Cohen recording…wait for it…Pecker has flipped. Pecker has struck an immunity deal in the Trump inquiry.

One tabloid headline claimed that Hillary Clinton was fleeing the country to avoid jail. I can see a future headline similar to that one, but perhaps with a different subject.