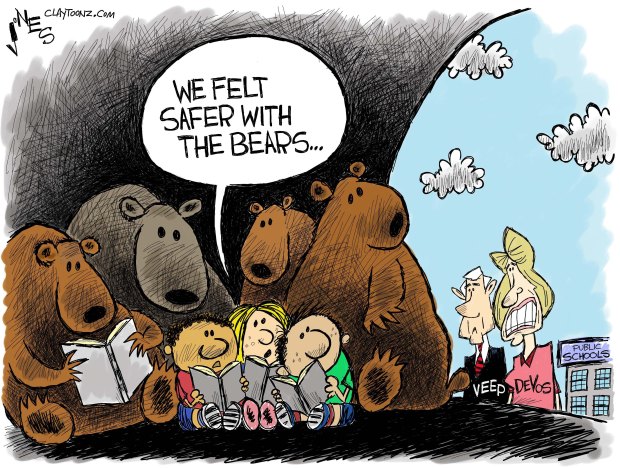 Betsy DeVos had a terrible performance during the Senate hearings on her way to confirmation as secretary of education. It’s a good thing she’s donated over $200 million to Republican causes and candidates, including many of the senators who voted for her. Even her defense of guns in schools to protect against bears didn’t hurt her among Republicans.

DeVos is a major backer of charter schools and vouchers. Even some charter school groups opposed her nomination. She exhibited a vast ignorance of how public education works. A lot of Republicans defend her selection by saying public schools have been messed up for years, so a new type of leader is in order. Many others say the department isn’t even important, so why care who leads it? Anyone who believes that shouldn’t be an influence on education of any kind.

Democrats staged an all-night vigil Monday to delay the vote on DeVos in hopes of collecting a third Republican to vote against her. They had two members from across the aisle, Susan Collins of Maine and Lisa Murkowski of Alaska, but only after they were sure they wouldn’t be the defectors to kill DeVos’ confirmation.

Republicans are afraid of being on the wrath-end of a Trump tweet. That fear, and DeVos’ campaign contributions, assured a tie vote in the Senate. Vice President Mike Pence cast the tie-breaking vote, the first time ever for a cabinet confirmation.

In the past DeVos has stated that government “sucks” and that public schools are a “dead end.” It seems DeVos now has the opportunity to make those statements true.

Children will be safer with the bears.