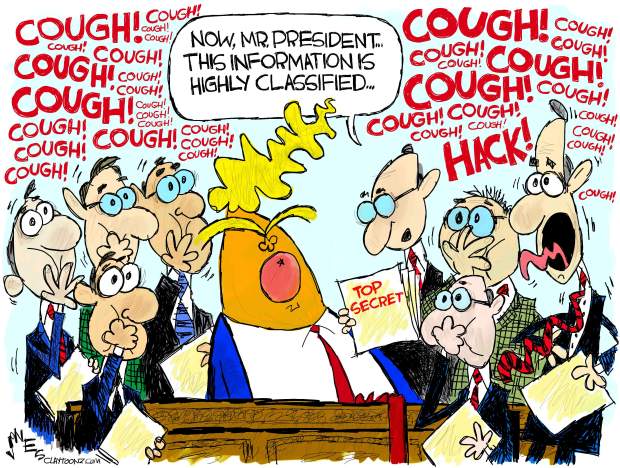 Aliens did not crash land in Roswell, New Mexico and there were no alien autopsies. How do I know this? Because Donald Trump hasn’t blabbed out that there were.

Donald Trump has a big mouth and telling him anything is dangerous. Plus, he’s not inhibited by any ethics or responsibility and will use anything to help him politically or merely to boost his own ego. The man in the most important office in the world is constantly telling us how important he is.

Shortly after assuming office, Trump hosted the Russian ambassador and foreign minister in the Oval Office. He didn’t allow American media into the room, but he did allow the Russian press along with all their recording equipment. There, he boasted to the Russians classified intelligence about Syria. The intelligence wasn’t even his to give as it had been provided to us by an ally.

A top European intelligence official said that sharing of intelligence with the United States would cease if the country confirms that Trump did indeed share classified information with Russia because “sharing intel with Americans while Trump is president could put their sources at risk.”

The New York Times reported that the United States has increased measures to penetrate Russia’s power grid as a message to Moscow to stay out of American cyberinfrastructure. The juiciest part of this is that, according to reports, Intelligence didn’t inform Trump out of fear he’d leak it, either because he has a big mouth or that he would want to warn the Russians. Basically, American Intelligence views Donald Trump as a security risk for the entire western world.

Trump denied the report by tweeting, “a virtual act of Treason by a once great paper so desperate for a story, any story, even if bad for our Country.” I don’t know why he capitalized “treason” and “country.” He also tweeted, “These are true cowards and without doubt, THE ENEMY OF THE PEOPLE!” No. What are treason and the enemy of the people is a guy who will calls out to foreign nations that he’ll accept dirt on his political opponents to help him politically. Also, it appears that American Intelligence is afraid Trump will act in a treasonous way that would make him the enemy of the American people.

But, let me ask you this; How can Trump deny the report if Intelligence isn’t informing him?

Proving he can’t be trusted, yesterday, Trump tweeted out that ICE was about to stage a major operation to apprehend millions of undocumented immigrants. Hey, thanks for the heads-up, Donald.

What is not classified is that Donald Trump is a stupid asshole.

During an interview with ABC News’ George Stephanopoulos, while talking about his taxes, Trump interrupted himself to scold “acting” chief-of-staff Mick Mulvaney for coughing. After kicking the Mick out of the room, Trump continued to beef about the coughing.

What Mulvaney may have been doing was attempting to tell Trump to shut up about his taxes. He used a cough since he wasn’t seated next to him and couldn’t kick him under the table. Trump probably would have cried about that too.

“So, in my taxes, where there are no details of payments from Russia or to their hookers for when they peed all over me and…wait…who’s kicking me? What a jerk!”

In the past, Trump has actually kicked a baby out of one of his rallies for crying.

There’s only room for one big-mouth baby when Donald Trump is in the room.