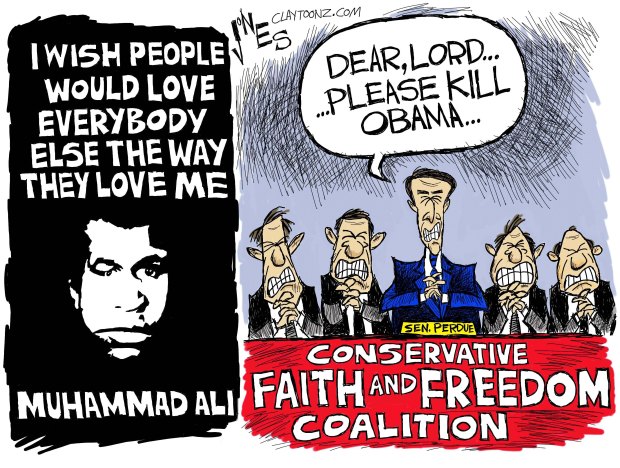 Muhammad Ali was a Muslim, the religion conservatives tell us is so violent and hateful. Meanwhile, Georgia senator David Perdue attended a Christian organization’s event and publicly prayed for the death of President Obama. What a sweetheart.

The senator was speaking at the conservative Faith and Freedom Coalition’s “Road to Majority” event when he said, “I think we’re called to pray for our country, for our leaders and, yes, even our president. Now in his role as president, I think we should pray for Barack Obama.

“But I think we need to be very specific about how we pray. We should pray like Psalms 109:8 says. It says, ‘Let his days be few, let another have his office,’” Perdue added.

The next verse, which he did not recite, reads “may his children be fatherless and his wife a widow.”

The conservatives laughed and laughed. They find stuff like making fun of Hillary Clinton’s looks, and the president’s death hilarious. Just the other day many went crazy online with racist comments toward Sasha Obama on her 15th birthday.

A spokeswoman for Perdue accused the media of “pushing a narrative to create controversy.” She added “Senator Perdue said we are called to pray for our country, for our leaders, and for our president. He in no way wishes harm towards our president and everyone in the room understood that.” I suppose that’s why everyone in the room laughed and the senator used a prayer for death.

A lot of conservatives claim they only disagree with Obama’s policies. I’m sure that’s why they get upset over his golf game, claim he’s taking guns away, he was born in Kenya, he’s a socialist, he’s a Muslim, and target his wife for insults.

Creative note: I was googling images and I found a silhouette of the champ on a T-shirt, which I styled this drawing off of. Yes, I actually drew it. It’s obviously a younger version of him.

I’ve been hearing a lot of my conservative friends whine about Donald Trump. They claim he’s not a real conservative yet he’s stealing their party. Now National Review has joined in on the Trump attack.

The magazine National Review was always the authority within the Conservative movement. They actually garnered a fair amount of respect as a journalistic publication, before “journalism” from conservative sources such as Breitbart, The Daily Signal, The Daily Caller, The Blaze, etc, created an industry out of birtherism, race baiting, and just trolling Obama haters. Writers for NR were considered intelligent, even elitists (which is a word conservatives throw at liberals now). Now most conservative writers could work for the Klan.

National Review has assembled 20 conservatives to write essays in an attempt to destroy Trump. Pundits have been wrong on everything Trump since Trump entered the race but one thing I am right about is that the only one who’s going to destroy Donald Trump will be Donald Trump. If insulting the entire state of Iowa as stupid, saying John McCain is not a war hero, a desire to mimic Nazi tactics in regards to Muslims, referring to Mexicans as rapists and murderers, and hanging out with Sarah Palin, hasn’t killed him then the fading National Review doesn’t pose much risk to his candidacy. For that matter, neither will political cartoons but we’re not going to stop drawing them. They’re too much fun.

The people who say newspaper endorsements don’t really help elect candidates (and they’re right) now think the National Review’s endorsement of anyone but Trump will work. Even when the media source is conservative, it’s still the media.

What I love most about conservatives is that they’re lying in the racist bed they made. For years they have cultivated racism, sexism, homophobia, a war against the poor, and just outright bigtory. They watered it, fertilized it, made sure it got enough sunlight, recited poetry to it at night, and now they wonder how the Hell it bloomed and now it’s eating their house.

Trump is a conservative. Did any of these writers question his conservatism when he endorse Mitt Romney in 2012? The man led a birther campaign against the president. He wants policies that force people to say “merry Christmas.” He hates Latinos, Hispanics, Muslims, women, poor people, and he lacks any sense of humor. He’s a conservative. The reason National Review conservatives don’t like him is because he doesn’t disguise his racism, sexism, homophobia, and outright bigotry with their usual code words. Don’t you hate it when people don’t cooperate?

The conservative movement has always been kinda racist. You can go back very deep into history but just look toward the 1970’s Nixon strategy, to Reagan’s strategy, to Bush’s strategy. They won elections by telling the white man the black man is taking what belongs to him…so they better make sure the black man never has anything. Now the fear mongering is targeted toward Muslims, Gays, Hispanics, etc. You can’t win elections with that anymore.

After Obama was elected conservatives turned their racism up to a Spinal Tap amp of eleven. They refuse to work with him. They clearly stated their only legislative agenda was to make him a one-term president. They question where he’s born. They question his religion. They call him a communist. Then they say he’s the one being divisive.

Trump is not a conservative? Trump is the very picture of the voters Republicans have been aiming for. He is the face and bad hair of conservatism.

I resisted joining the herd of political cartoonists drawing turkeys to symbolize the nation of Turkey. Did Turkey plan to jump in American news the week of Thanksgiving? They could have timed it better for cartoonist by giving their turkey cartoons a few more days of shelf life.

A lot of people who declare we should put troops into Iraq and Syria, and others who say we should go to Ukraine, never sign up themselves. They’re real quick with the war plans if they’re not a part of the plan. Hell, these people don’t even want to pay for it monetarily. They’re really good at taking their guns into Walmart and coffee shops though.

On top of that a lot of conservatives idolize Vladimir Putin over Obama, and gloat over how strong of a leader he is. Now they’re even gloating about France’s war with terrorism because they’ve dropped about two percent of the bombs the U.S. has dropped on ISIS. But they’re in love with Putin. He’s a homosexual hating bully, so go figure.

But they’re out there listening to Rush, watching Fox News, and believing Obama is coming for their guns and he’ll destroy the Constitution to serve a third term. They consider themselves Patriots and they support our troops while wanting militia members to shoot them if they cross the Texas state border. They support the police, unless the police try to remove a racist from letting his cattle graze on federal land. They believe there should be drug testing for those on welfare, while probably being on welfare themselves. They still believe there were WMDs in Iraq and we found them but the media is keeping it a secret. They believe Hillary Clinton ordered the attack on Benghazi. They know deep in their hearts that the president is a foreign-born-Communist Muslim and that he supports terrorists and has a secret agenda to destroy the United States. They will tell you all about Obama’s “apology tour” where he’s apologized for the United States and doesn’t believe in American exceptionalism. They talk about Michelle Obama’s trillion dollar costs to the taxpayers vacations. They swear gay marriage will destroy the sanctity of marriage and they know this because thrice-married Rush Limbaugh told them so. Cops never profile African Americans. Illegal aliens are voting (for Democrats) and using up social services. Don’t get them started on how Obama stole the presidency.

That’s who Republicans want to moderate their debate.

I understand none of the candidates are as tough or has the endurance of Hillary Clinton who can tackle partisan, nasty questions for 11 hours. Two hours of being asked to explain a tax policy is difficult for the GOP. I also understand if they find Anderson Cooper more intimidating than Vladimir Putin.

It does boggle my mind that someone trying to convince us he’s not a total crazy person and should be president says future moderators should prove they’ve voted Republican. Who do these people want asking them questions? Their moms?

So anyway, go scream up at the attic and see if your uncle can fit it into his schedule.

I was going to draw a cartoon on another subject. Then I got this idea and I was going to wait a day to draw it. The more I thought about it the more I wanted to go ahead and do this idea. I sketched it out more than once as I had a very difficult time with the angle. After being happy with a rough version I tackled it on the good paper and I had to erase about 15 times.