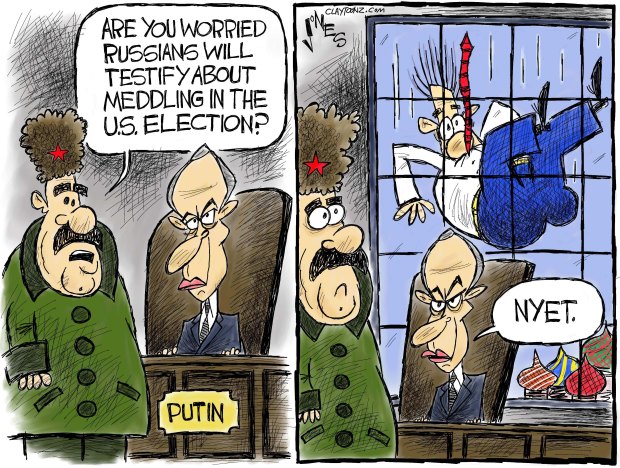 People who oppose Russian President Vladimir Putin have a tendency to wind up dead, or seriously hurt. Maybe they’re just clumsy and naturally fall out of fourth story windows.

First off, the guy’s got the same name as “Vlad The Impaler,” the psychopath who was the inspiration for Dracula.

Putin hasn’t impaled anyone on spikes or bitten anyone on the neck yet, as far as we know, but many do turn up dead. Or maybe in Russia, they’re deadniks.

Denis Voronenkov, a critic of Putin who sought asylum in the Ukraine was shot dead in broad daylight Thursday in Kiev.

Boris Nemtsov (of course one of these guys would be named “Boris”) led massive rallies against Putin in Moscow. He was arrested several times until he was finally shot four times in the back, outside the Kremlin, in 2015. The killer remains at large.

Boris Berezovsky (OK. Maybe they’re all named “Boris”) was found dead inside a locked bathroom at his home in the United Kingdom, a noose around his neck, in what was at first deemed a suicide. Later the coroner couldn’t determine the cause of death. Berezovsky had accused the Putin government of poisoning another critic.

That critic was Alexander Litvinenko who was poisoned in 2009. He was a former intelligent agent who turned whistle blower. Ain’t blowing no whistles no more.

Stanislav Markelov and Anastasia Baburova were both shot outside the Kremlin in 2009. Markelov was a human rights lawyer known for representing Chechen civilians in human rights cases again the Russian military. Baburova was a journalist. The government blamed Nazis but I don’t think Steve Bannon was even in the country at the time.

Markelov represented Anna Politkovskaya, who was a journalist who had written articles critical of Putin. She was killed in 2006.

Sergei Magnitsky was a lawyer who was beaten to death in prison in 2009.

Natalya Estemirova, another journalist, who investigated abductions and murders that had become commonplace in Chechnya. She was kidnapped, shot several times, once at point-blank-range to the head, and her body dumped in the woods. They never caught the bad guys.

Anna Politkovskaya was another reporter and had written a book titled “Putin’s Russia” which accused him of turning Russia into a police state. She was shot in an elevator in her apartment building.

Sergei Yushenkov had just registered an opposition party when he was gunned down outside his home in Moscow in 2003.

Yuri Shchekochikhin was a journalist covering crime and corruption. He died of “mysterious” causes in 2003. His medical documents were deemed classified by Russian authorities.

Let’s not forget the feminist punk band Pussy Riot. Three members of the group were sent to prison on charges of “hooliganism” after performing songs critical of Putin and accusing him of being a dictator. That would be the equivalent of George W. Bush throwing Green Day in prison for their album “American Idiot.” But this is America. Prison here is having to listen to Green Day.

Just about every Russian connected to the hacking story has fled the United States and are safely, supposedly, back in Russia. You have to remember, Putin has a style of leadership Donald Trump has expressed admiration for.