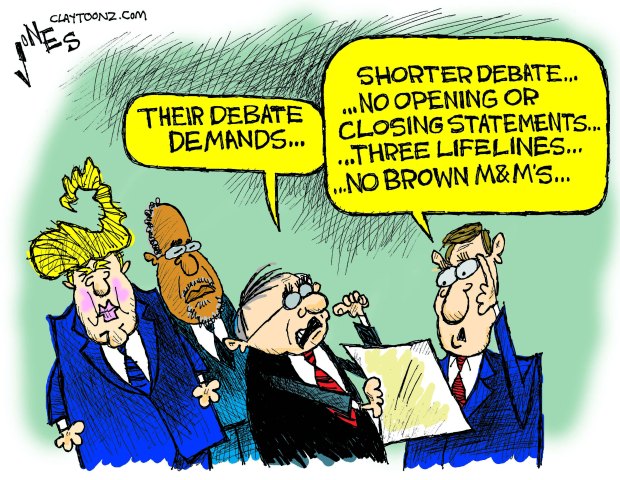 Donald Trump and Ben Carson wrote a letter together. That way they could put their heads together and include a lot of big and hard-to-spell words. The letter was for CNBC, which is hosting the next debate. CarsonTrump is threatening to ditch the debate and go bowling if their demands are not met. They don’t want another three hour debate and opening/closing statements are to be excluded. CNBC, after wetting themselves, has reportedly met their demands. I think CNBC should have called their bluff. Trump folds for Fox News breaking his weekly vows of never appearing on their network ever again. CNBC should have stood their ground just so CarsonTrump can’t succeed at being bullies. The risk to CNBC is that CarsonTrump won’t show up and their ratings dive into a cellar and resembles their usual nightly ratings. The risk for CarsonTrump is that there’s a bunch of cameras on their opponents and they’re not there to soak up the attention. Now that that’s out of the way, CarsonTrump is right. A three hour debate, which might be necessary when you have eleven candidates, is too long. I’m sure it’s brutal for the candidates but it’s a special unique form of torture to the viewers. While the top tier candidates receive most of the air time, half of it’s wasted on people we forgot were in the race. We don’t need opening and closing statements either. Candidates usually avoid most of the questions anyway and that’s where they can put insert their life stories. Brown M&M’s. What’s that about? I did this for myself. I’m sure it’s going to fly over most heads, unless the reader is wise to rock and roll folklore. When bands play a concert (and other appearance), they have a rider which is a list of requirements the promoter has to meet. There can be some crazy stuff in a rider, which a lot of gets ignored. Johnny Cash included an American flag in view of every audience member. Marilyn Manson demanded Haribo gummi bears and a toothless hooker. Seriously. Motley Crue required a 12-foot Boa Constrictor and Grey Poupon mustard. The Rolling Stones demands a snooker table. What the Hell is Snooker? Hank Williams III demanded a Great White shark and the Bloodhound Gang always wanted a Rhesus monkey. Axl Rose demanded a melon and an Italian leather sofa where he would sit to eat the melon. Britney Spears needed a photo of Princess Diana and McDonald’s hamburgers without buns. Queen Latifah wanted condoms and a bucket of KFC. Katy Perry demands that no one make eye contact with her. Most would require types of food, water, drinks, scented candles, type of rugs, etc. Some bands have recently demanded that all leftover food to be given to a homeless shelter. That’s nice. Right now some homeless guy in Akron might be eating an unfinished sandwich left by the Goo Goo Dolls. The band that started it all was Van Halen. Van Halen had serious pull during the late 70’s and 80’s as well they should. They rocked with a swagger other bands could only copy. Their most famous demand was no brown M&M’s. Why would they make that strange weird demand? Should we debate whether or not all M&M’s taste the same, no matter which colored candy shell you get? These riders could get really thick. So thick most promoters didn’t bother reading them all. Tell Marilyn Manson to find his own toothless hooker. But in addition to Boas, monkeys, Eminem’s Koi Gold fish, and Prince’s sandwiches wrapped in clear plastic that only he could unwrap, there were actually some serious stuff in these riders. A lot dealt with safety requirements so a roadie wouldn’t get electrocuted, get hurt loading in or fall of a rafter. So Van Halen included the no Brown M&M’s clause. If they found Brown in their candy then they knew the promoter didn’t read the entire rider and may have ignored a more serious demand. Or the promoter didn’t give a rat’s ass about their M&M’s demand. Anyway, the more you know, right? Now I really want some M&M’s. Did you like this cartoon? Want to help a cartoonist make a living? Look to the right of this page and make a donation through Paypal. The starving cartoonist appreciates it.

Earlier in the week he said he wouldn’t have cooperated with the shooter responsible for the carnage in Oregon. He said he would have said “c’mon, everybody. He can’t shoot us all. Let’s rush him.” Never mind the fact that guns are now manufactured where the user can shoot everybody and the shooter may not have waited while Carson formed a committee to rush him.

Carson spoke of a time when he did have a gun stuck in his ribs. He was at a Popeye’s when a robber came in, stuck the gun at him and Dr. Carson replied, probably in his calm and sleepy demeanor, “you don’t want me. You want the guy behind the counter.” To which the gunman replied “Oh OK.” Sounds like Dr. Carson cooperated. He could have rushed the robber or even squirted Louisiana Hot Sauce in his eyes (which is available at Popeye’s). Instead he pointed the gunman in the direction of the person behind the counter selling fried chicken and that stuff that’s an insult to jumbalaya.

Just in case anyone had any confidence in Carson’s intelligence, he doubled down later when he said the Holocaust could have been prevented if the Jews had guns. I think the doctor should crack open a history book and not one of those Texas history books. Germany only controlled Germany before the war. The death of over 6 million Jews did not include only Jews from Germany. Perhaps someone should inform him of the Warsaw uprising.

Dr. Carson also talked about the debt ceiling. He said if he is elected president he won’t have any problems with the debt ceiling. For once he’s right. He won’t have any problems with the debt ceiling if he’s president because Republicans in Congress have never refused to raise the debt ceiling while they had a Republican president. They never question it. Then Carson said he wouldn’t raise the debt limit because he wouldn’t authorize new spending. When he’s done with that history book he should probably read one on civics. Raising the debt limit does not authorize new spending. It does not increase the budget and if you don’t sign it then the United States defaults.

Republicans seriously think this man is qualified to be president. He’s not qualified to tutor anyone on government or foreign policy. He may not be qualified to order for himself from the menu at Ihop.

Ben Carson says he wouldn’t have cooperated with a shooter and would have attacked him instead. That’s some very tough talk for someone who’s not in a violent situation. Maybe he plays too many video games.

Carson also says the shooter can only shoot one at a time. I think that’s a statement even gun lovers will back away from. Wambo, the shooter wasn’t using a sling shot.

Ben Carson is a surgeon. He has read books. I think he may be the smartest dumb person in existence. 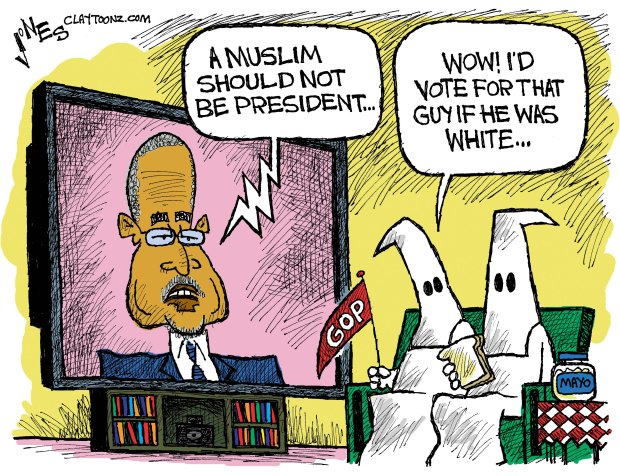 Dr. Ben Carson made some statements Sunday that he would never vote for a Muslim president. He went on to say that the religion is not consistent with the U.S. Constitution. He’s right.

The Muslim religion is not consistent with our Constitution. Either is Christianity, Judaism, Hinduism or Voodoo. Thomas Jefferson  wrote in 1821 that Virginia’s religious freedom law was meant to apply to “the Jew and the Gentile, the Christian and the Mahometan,” a term then used to mean Muslim, “the Hindoo and infidel of every denomination.” I think I’ll take Jefferson’s idea of the separation of church and state over Dr. Carson’s.

Once upon a time there were laws in this country that barred Catholics from holding office. Let’s not forget that women and blacks were also prevented from voting.

A candidate’s religion doesn’t determine if he’s fit for the office of president. It’s how he or she understands it applies to our laws, which is it doesn’t. Carson spends a lot of time talking about Christianity and exhibiting a lot of ignorance on basic civics. Of course we’re talking about a doctor who doesn’t believe in Climate Change, says people turn gay in prison, wants to use drones to bomb our border with Mexico and says we should eliminate the Veterans Administration.

Not surprising Democrats pounced on his comments. Very surprising a few Republicans jumped on it. Lindsey Graham, and John Kasich (in case you forgot they’re still running) both criticized Carson. Most surprising is Ted Cruz criticized Carson for his remarks. Ted Cruz! You have to be an extreme bigot to make Ted Cruz disagree with you. Bobby Jindal kinda sorta disagreed with Carson.

Carson was defended by Rush Limbaugh. Donald Trump, who’s still dealing with his public display of Islamophobia, said some people think we already have a Muslim president.

It’s very telling of a political party when your top three candidates consists of a racist egomaniac, a pathological lying failed business leader and a guy who wants to enact some sort of Christianity Sharia Law.