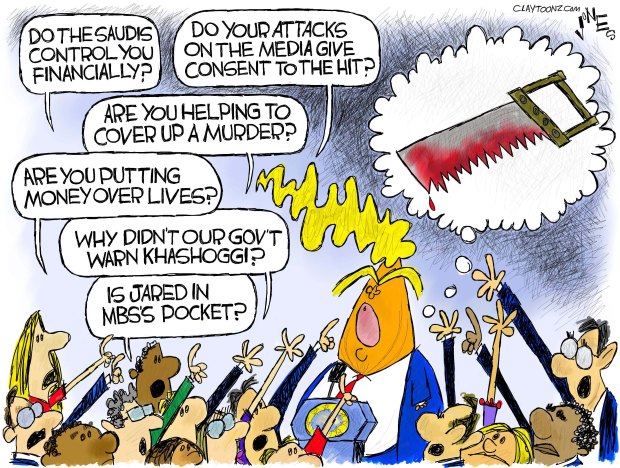 Which is worse? That Donald Trump is too stupid to understand that continuing to attack the press in the wake of the death of Jamal Khashoggi is tacky, tasteless, and offensive, or that he knows and just doesn’t care?

Earlier this week at a rally in Montana, Trump talked about a Republican’s physical assault on a reporter, which he and his angry mob all laughed over.

Last May during a special Congressional election in Montana, Greg Gianforte attacked Ben Jacobs, a reporter for the Guardian. Gianforte initially denied doing it until witnesses and a recording of the attack came to light. He apologized and was found guilty of assault. Naturally, in this new normal, he won the election.

Trump praised the guy and said, “Any guy who can do a body slam … he’s my guy” and made a gesture mimicking a body slam. Don’t forget, Trump is a wrestling fan. The theme of Trump’s speech was highlighting how Republicans are the party of “law and order” and Democrats are for “angry mobs.” I’m starting to believe that cognitive dissonance is contagious.

The Guardian’s U.S. editor, John Mulholland said, “In the aftermath of the murder of Jamal Khashoggi, it runs the risk of inviting other assaults on journalists both here and across the world where they often face far greater threats. We hope decent people will denounce these comments and that the President will see fit to apologize for them.”

Places like Turkey and Saudi Arabia weren’t bastions for press freedom before Trump came along, but now, journalists are literally being killed in brazen fashion.

The Saudis killed Khashoggi in their Istanbul consulate. After claiming for two weeks they had no idea of Mr. Khashoggi’s whereabouts, then speculating that he was dispatched by “rogue killers,” a theory Trump also tossed about, they now admit he’s dead. They claim he died in a fist fight and that eighteen nationals have been arrested. Turkey claims his body was cut into pieces while he was still alive.

While stating the death was “unacceptable,” Trump added that Saudi Arabia is a “great ally.”

Trump, who has done business worth millions for years with Saudi Arabia, has consistently expressed that money is more important than this journalist’s life. He is more concerned about a potential arms deal with the Arab nation than press freedom. Perhaps favoring the dollar over humanity is how Trump became a billionaire, in addition to conning and inheriting. Saying an attack on a journalist is “unacceptable” is a little hard to swallow when you’re leading a hate rally in laughing about an attack on a reporter.

Every journalist’s freedom should be defended by the leader of the free world. An American president should make it a top priority to defend the life of a journalist working for an American news outlet, even if he believes they’re “fake news.” He should not be helping autocrats he idolizes in covering up a murder.

What has been proven this week is that we have a fake president.