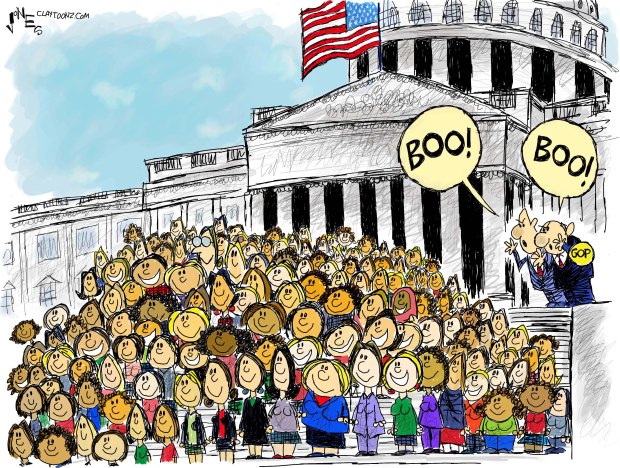 Yesterday was a historic day for Congress.

Nancy Pelosi became the first person elected as Speaker after leaving the position since Sam Rayburn in 1955. She remains the only women ever elected to the position.

There were several other historic achievements for women with the 116th Congress.

Cortez has become the Right’s favorite new symbol of scary women. Google “Alexandria Ocasio Cortez Brietbart” and see what comes up. They’re obsessing about her almost as much as they are about black crime.

Yesterday, Republicans groaned and booed her when she cast her vote for Pelosi. She was the only person they booed for voting. Republicans also released a video of her dancing with friends from her college days. Nothing salacious, evil, or malicious about the dancing, as they were doing a play on The Breakfast Club. But for some reason, this is a scandal for the GOP. If Footloose Kevin Bacon becomes a transexual and runs for Congress, they will totally flip out.

Mike Pence, a man afraid to be alone in a room with a woman who is not his wife, got a little thrill when he not only had to swear women in with a Quran but also the first openly bisexual woman elected to Congress. Kyrsten Sinema chose to be sworn in on a law book instead of the Bible. Pence probably experiences as much discomfort with the Constitution as he does with the Quran and “nasty” women capable of having their own thoughts.

The Women’s March in 2017 continued into the halls of Congress yesterday, and Republicans are petrified. They don’t know how to gerrymander the women vote.

More people are voting for Democrats now than for Republicans. In 2016 and 2018, the majority of the nation voted against Donald Trump. Despite controlling the Senate, more people voted for Democratic candidates. Women aren’t just voting and getting more involved with activism, they’re running for office. Cortez, an educated, socialist, woman who is not white represents everything they fear. The future.

I personally believe we need to keep electing more women, non-whites, and people with different religious beliefs to positions of power. We are a diverse nation. Our government should represent that.

Yesterday presented us with two contrasting images. One was of the most diverse Congress in history being sworn in. The other was Donald Trump surrounded by a bunch of old bald white guys griping about immigrants.

Guess which one represents your future.

O’Rourke is currently representing Texas in Congress. His first name is Robert, which is where the nickname “Beto” came from, as it’s often short for “Roberto” in Mexico. It was targeted in an attack ad by Ted Cruz, whose first name is “Rafael.” Go figure.

Ted Cruz is not a man of principles, ethics, or charm. His campaign also targeted O’Rourke for being likable and made fun of his past skateboarding and playing in a rock band. Whereas, any personality Cruz has is stored in the basement of the Alamo.

Despite being a Republican in deeply red Texas, Cruz is in trouble. He’s seeking help from Donald Trump, a man he once called a “sniveling coward” for accusing his father of being involved in the assassination of JFK, and for making fun of his wife’s looks. Did I mention Cruz doesn’t have principles?

Nobody really likes Ted. Al Franken once said he likes Cruz more than anyone else in the Senate, and he hated Ted Cruz. Lindsey Graham, a fellow Republican, once said you could shoot Cruz on the floor of the Senate and none of his colleagues would convict you.

If Cruz loses his reelection bid for his Senate seat, the GOP would hate losing the seat, but wouldn’t miss Ted.

You can tell a lot about a person who likes Ted Cruz. It’s a sign that you don’t want anything to do with that person.

There is a blue wave coming, and Republicans can’t stop it. They can only hope to contain it.

I’m not saying a blue wave is coming because that’s what I want, and I do want it. I’m saying it because it’s true, though a lot of Republicans are denying it.

Lamb does support gun rights, opposes new restrictions on guns, and favors Trump’s steel tariffs, but he’s not a conservative. He supports a woman’s right to choose. He favors Obamacare. He said the Trump tax plan was a giveaway to the rich. And, yes…he supports increased background checks for gun purchases.

Lamb is a Marine and a prosecutor. His opponent said people who supported Lamb hated Trump, our country, and God. If all that’s true, then why did this Democrat win a district that went for Trump by 20 points?

In each election since Trump’s stolen victory, Democrats have closed the gap, even in races in red states they didn’t win, like in Georgia and Montana. They’ve won numerous state legislative seats and would have turned Virginia’s General Assembly from red to blue if not for a coin toss. Democrats won a United States Senate seat in Alabama. It takes serious denial to say there’s not a blue wave coming.

When Democrats win, Republicans don’t just throw out excuses, they produce lies. They accused Acorn of illegally helping Obama’s victory. They claimed Black Panthers (not the Marvel superhero) was scaring people away from polls. They claim millions of illegal immigrants voted. Trump claimed illegal immigrants voted for Clinton as his excuse for losing the popular vote and even created a special commission to study it (which was later dissolved after going nowhere). When Democrat Doug Jones beat pedophile Republican Roy Moore in Alabama, conservatives claimed blacks were bused in from Mississippi to vote.

The party holding the White House tends to lose seats in the first midterm after the presidential election, even when the president is doing a fairly competent job. With the Republicans holding their nose to support the worst president in the history of the United States, Democrats are going to retake the House.

Democrats need to flip 23 seats. Republicans hold 118 seats that lean Democratic. It’s crazy to believe Democrats will flip over 100 seats, but they’re going to win enough to take the House. The only reason they may not gain control of the Senate, and perhaps even lose seats, is because more Democrats are defending seats than Republicans in 2018.

The good news for Republicans, since the message “help us help Trump make things even worse” isn’t a real vote generator, they still have Russian troll farms to help them out. The Russians are still meddling in our election. Additional good news for the GOP is that our government isn’t doing anything about it. It’s like the Trump administration actually wants them to meddle. It’s not likely voters are going to give Trump more Republicans to help him deflect investigations and ignore Russians attacking our nation.

After I posted yesterday’s cartoon of students protesting and wrote about adults attacking them with lies, some adults commented on Facebook, and they proved me right. They started lying about the students. I’m looking forward to comments under this cartoon by conservatives making more excuses.