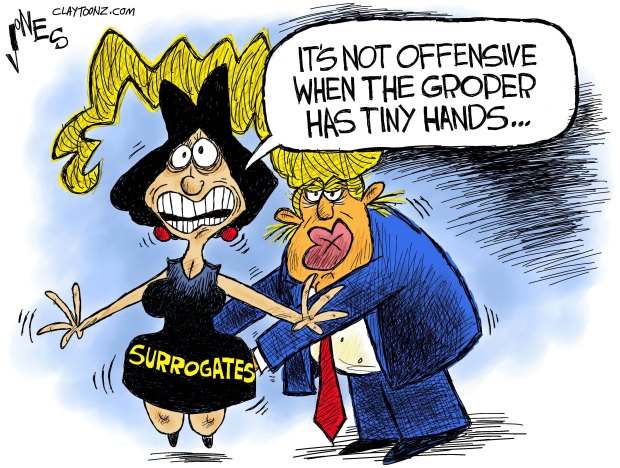 Friday afternoon The Washington Post released a video of Trump bragging about groping and assaulting women, attempting to sleep with a married woman, and how women will let you do anything “when you’re a star.” He gave disgusting details such as being able to walk up to them and “grab them by the p***y.”

How bad is it? Speaker of the House Paul Ryan cancelled a Saturday appearance with Trump. U.S. Representative from Utah Jason Chaffetz has rescinded his endorsement, as has that state’s Republican governor. It’s so bad that Trump actually apologized….sort of. His first was a statement saying he apologizes IF anyone was offended. That’s not a real apology. No word on whether he apologized to the woman he attempted to sleep with or her husband, or to his own wife. Hours later he released a video saying the guy in the video wasn’t really him and he apologizes, but Bill Clinton is much worse. His flying monkeys were released with the same “Bill Clinton is worse” talking points. Trump said everyone who knows him knows he’s not like that. No. It seems everyone who knows Trump knows he’s exactly like that. He’s a guy who’ll grope your wife while refusing to pay you for contracted labor.

The tape is from 2005 and Trump said it was “locker room” talk. The thing about locker room talk is that it’s usually committed by teens and guys in their early 20s. Not by men in the 60s.

I’m a straight guy. I’ve engaged in “locker room” talk. Every guy has. We have all said jokes that are inappropriate. But I have never said, or been friends with anyone, who said the sort of stuff Trump did. I have heard plenty of guys talk like Trump and I assure you, most men find it distasteful and try to distance themselves from that person. It’s boorish. At a certain age guys don’t give details of their sex life and they don’t want to hear their friends’ either. Details come with mental images. Ew! Trump’s talk doesn’t just turn off women. It disgusts men too….those with a conscience. That’s something Trump surrogates lack.

His lackeys didn’t bail from the Trump campaign. They all doubled downed and defended the guy. They pointed out the tape was over ten-years old and you know a man doesn’t really start growing until he’s 60. The biggest talking point was to immediately go into talking about the Clintons. The thing is, this isn’t about the Clintons. This is about Donald Trump being a crass and vulgar human being who doesn’t respect women. This man claims he has the best temperament.

Let’s see Mike Pence say “Trump never said that” to this scandal. Trump surrogates have sold their soul to this guy. You would think on Friday they’d ask for a return but instead they just keep plodding along.

There were reports earlier in the week that Trump was crude and vulgar toward women on the set of his television show The Apprentice. His daughter Ivanka told us several weeks ago that her father “is not a groper.” From calling women pigs and slobs to Alicia Machado, Trump has left a trail of slime. His people will say Bill Clinton has a trail too except Clinton actually knew policy and he’s not running for president. Trump says this is a distraction and we need to focus on the issues. The problem is, Trump is the issue.

Is this the October Surprise? Sort of. Is it the scandal that finally defeats him. Yes it is. The support he has now may not decrease at all. His supporters are already blind to logic and reality. But for Trump to win the election it’s not losing support he has to worry about. He has to gain support and this video kills that. How does he gain support after this and his upcoming flame-out at Sunday’s debate? It’s not happening. If both candidates’ support freezes where it is today, Clinton wins the election. Trump has a very low ceiling and his bad comb-over had hit it.

This does more than kill the Trump campaign for president. This destroys the Trump brand.

A few years ago a man was being a bore to a woman I care about. He had a tendency to slap her on the butt. He did it quite often. He thought it was amusing. She told me she didn’t know how to stop him. I told her she didn’t have to. I’d stop him. I made it stop. There wasn’t any violence or even a threat, but I stopped it. All I had to do was talk to him and he felt bad, embarrassed, and probably a little humiliated. He took it well, took responsibility, and apologized without being asked or told to. Trump needed a video unearthed by The Washington Post to actually pretend to apologize. I don’t want a crass, vulgar, bore disrespectful of practically everybody as my president.

We have to stop it.