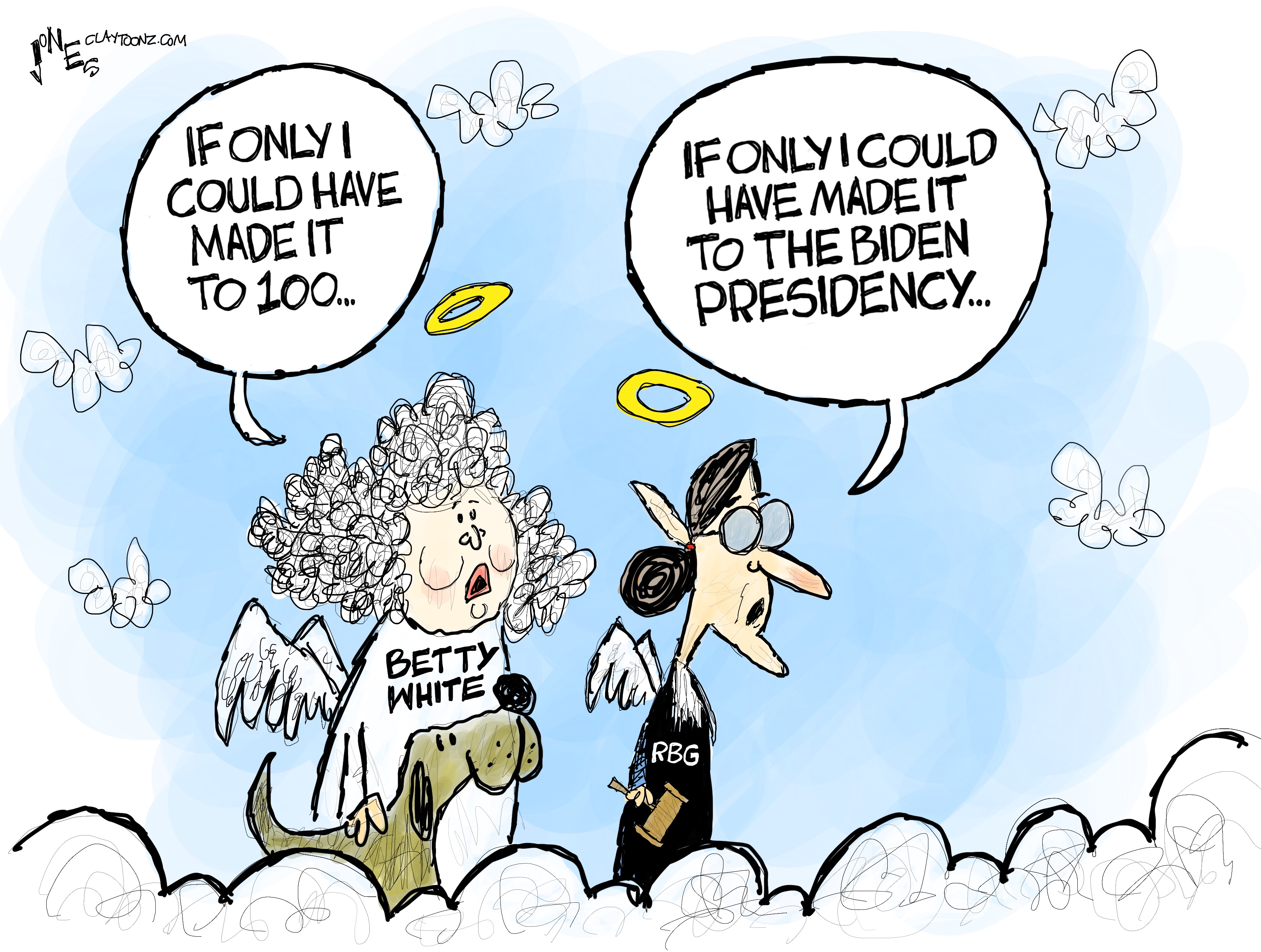 It was a struggle for me a few weeks ago when I did a cartoon honoring Betty White after her death. I was happy with the cartoon I did create and it did really well with my clients and on social media, which is rare. A couple days later, I thought of this idea and did one of those I-should-have-had-a-V8 slaps to my head. This was more my style. But, I decided to save it for Betty’s 100th birthday. My plan was to do the cartoon a day or two before her birthday so my newspaper clients could run it on her birthday. And then I forgot.

Over the weekend, I drew cartoons on Boris Johnson, Prince Andrew, Glenn Youngkin, and on Trump’s racists (which got me slapped by TikTok and YouTube. Racists have feelings, you know). I totally spaced out on Betty’s birthday. I usually tell Alexa to remind me of something upcoming, but I whiffed on this one. Alexa already has about 50 reminders for me and sometimes I don’t enunciate well and then six months later, I can’t understand what Alexa is reminding me to do. What the hell is “upload to goats?”

When Betty died, there was a lot of focus on her not making it to her 100th birthday, which was only weeks away. There was even a TV special planned for the event. Apparently, Death doesn’t care much for Neilsen ratings. But living to 99 is still an accomplishment, especially considering Betty White had good health for most of her life which is probably something required to live to be 99. I think the real injustice is that Supreme Court Justice Ruth Bader Ginsburg didn’t survive long enough for her replacement to be someone who shares her values, and before Republicans and Donald Trump would be able to put a cult-dwelling lunatic in her seat.

Obama had ten months left in office when Justice Antonin Scalia died but McConnell said they couldn’t replace a justice in an election year as the people need to decide at the ballot box in the upcoming November election of 2016. Except, the people did decide when they elected President Obama to serve four years in 2012. McConnell refused to allow Obama’s nominee, Merrick Garland, a hearing. After Trump came into office with the aid of Vladimir Putin meddling in our election, McConnell gave the nomination to the orange toddler.

Four years later, in 2020, when Ruth Bader Ginsburg died, it was two months before the election. This time, McConnell rushed through the nomination of Amy Coney Barret, a right-wing religious zealot. His argument was that the people had spoken by giving the Senate the Republicans. But, going on Mitch’s previous argument, the people should have been allowed to have their say in the upcoming November 2020 presidential election, where they selected Joe Biden. Also, his argument about the people choosing a GOP senate is bunk too as most American voters voted for Democratic candidates for the United States Senate.

My point is, Mitch McConnell is a sonofabitch and you can’t trust him on anything. He lies. He doesn’t have principles. If he ever puts a line in the sand, the line moves. If the Golden Girls was still on TV when Betty White died, Mitch McConnell would have stolen that seat and had given it to Ann Coulter.

People like Joe Manchin and Kyrsten Sinema need to be aware of this. These two are so dedicated to the filibuster that they refuse to bend for voting rights. How in the hell is the filibuster more sacred than voting rights? But if the GOP retakes the Senate, Mitch McConnell isn’t going to care that two Democrats saved the Filibuster when their party had control. He doesn’t feel a need to honor the principles and ethics of others. He doesn’t care if people point out that he totally lacks principles and is a lying thieving hypocrite. He chuckles when people call him “Cocaine Mitch”. He laughed when asked if he’d replace a Supreme Court justice if an opening came up in the last year of a Trump presidency (sic). I remember this because it made my skin crawl.

The really bad thing is, while Sinema may be a newbie, kinda stupid, and not aware of this, Joe Manchin is fully aware of this. He’s been around long enough. He knows better. He knows you can’t trust Mitch McConnell or any of the Republicans. Unless he has amnesia, he doesn’t have an excuse.

I like Betty White. She was a great person. But when she died, I wasn’t sad because she was 99. I was much sadder and truly mourned when Ruth Bader Ginsburg died. When RBG died, we lost a lot more.

Music Note: The music I listen to while drawing usually doesn’t have anything to do with the cartoon’s subject matter. It’s usually something to put me in a zone for shading, crosshatching, and coloring. For today’s cartoon, I listened to the Black Rebel Motorcycle Club, which has nothing to do with Betty White or Ruth Bader Ginsburg.

Watch me draw: There will not be any new YouTube videos for at least the next two weeks. I’m on suspension…again. 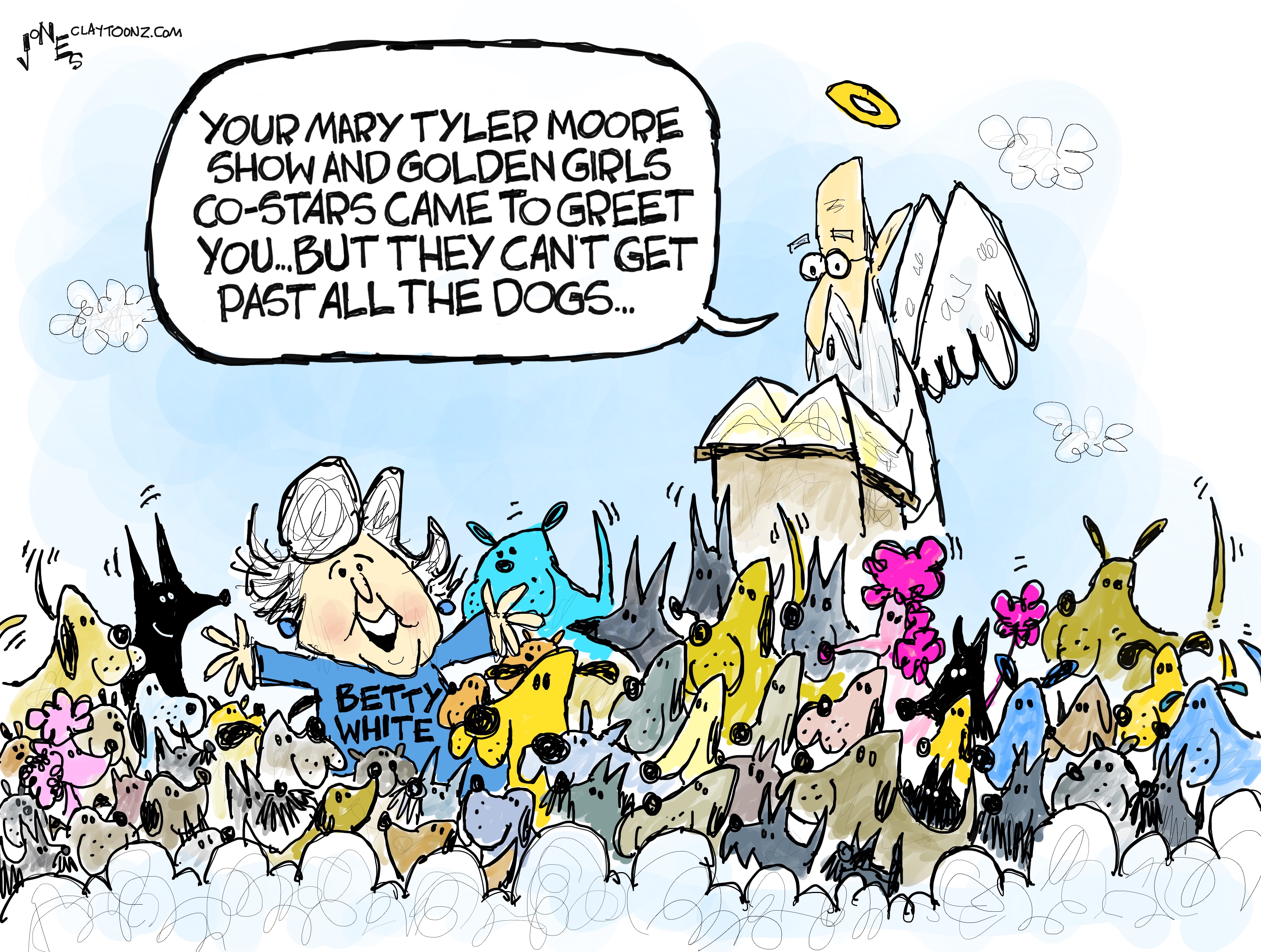 If you’ve been here more than twice, you are probably aware that I don’t like what we call in the business “obituary cartoons.” And even when I do draw them, I try not to use the pearly gates or Heaven tropes. Even in a week with some very high-profile deaths, John Madden, Arch Bishop Desmond Tuto, and Harry Reid, I didn’t draw an obit cartoon. Though I did consider drawing one cartoon featuring all three of those people, I was in Washington, the Ghislaine Maxwell verdict had just come in, and I didn’t feel like doing it. But, you would have liked it.

You would have liked it because people like nice obit cartoons. I had a couple of editors in the past tell me they were their very favorite cartoons, which I found very disturbing but it’s indicative of editors in the newspaper business. They prefer nice and sweet over harsh and brutal. Readers like them too. I once had a widow call me the day after her husband died to thank me for the cartoon I drew on it (to be fair, she already knew me). That blew me away because with all the things going on around her on that day, she took a moment to call me.

But to me, I think these are the worst cartoons in the business. They’re not a real challenge to cartoonists and they don’t put a lot of thought into them. For example, they’ll often put atheists, Muslims, and Jews at the pearly gates. When I worked at newspapers, I learned that the nice and sweet Heaven/pearly gates tropes worked really well with local people. Those days were basically days off.

I once made a deal with Free Lance-Star editor that every time I had to “take the day off” to draw a nice non-irreverent cartoon, that I got to do a hard-hitting cartoon the next day without him hassling me about it. You know, my job. Once, upon seeing an obit cartoon I drew, my editor told me he liked it so much that he nearly had an orgasm, I replied with “I’m gonna go home now, take a shower with steel wool, and throw up several times.” That editor often freaked out.

However, obit cartoons have always been a challenge for me.

They’re a challenge for me because I don’t like nice and sweet. Political cartooning is a negative art form and I’m a negative person, at least in regards to the issues I cover. When it comes to politics and expectations of those who are rich and powerful, I’m a glass-half-full-of-horse-piss kind of person. So, they’re a challenge for me because I usually try something irreverent with them. That doesn’t mean I’m trying to be cruel or vindictive to the recently deceased, but more like trying to make a point. Those are the best obit cartoons in my business. And sometimes I get screamed at a lot when I do those. My Mike Nesmith cartoon received more harsh reactions in 2021 than any of my guns, abortion, Trump, or January 6 cartoons did. My GoComics page lit up that day.

So I tried the same approach with Betty White. I wanted to use her death to make a point, but not in a cruel way toward her. I gave up on pointing out she died on the last day of 2021 because by the time any newspaper could publish the cartoon, readers will be so over documenting the new year. Quite frankly, aren’t you a little tired of all the year-in-review shit by now? So, I thought the more interesting aspect was that she died 18 days short of her 100th birthday. C’mon, death. Why would you do that?

There was a huge television special planned for her 100th birthday. People Magazine already had her on the cover for her 100th. Stop the presses. But, before I could get my cartoon idea, I had to find my point. I couldn’t find one.

I couldn’t find one except that everyone loves Betty White. How many times have you heard someone quote Betty White? Seriously, you have. I love Betty White, and I’m a negative person. She’s awesome. In fact, I re-watched The Proposal about a week ago which was made when Betty was around 90, and she was fit and spry in that. She also stole the movie, even with Sandra Bullock and Ryan Reynolds starring it, just like she stole every scene she was in on The Golden Girls, The Mary Tyler Moore Show, and Hot in Cleveland. She stole Saturday Night Live from the entire cast of comedians. She beat Deadpool…and she beat me too.

Laura and Hilary, my two proofers, kinda gushed over this cartoon and even forgot to tell me if all the words were spelled correctly. Laura told me she liked the cartoon more than I did. I believe her. And you will probably like it more than I do too.

But I do like it. Don’t tell anyone, but I smiled a few times while drawing the dogs. Aw, shut up.

Don’t you start with me on this cartoon being nice and sweet. Not you too. But, I like Betty White. I in fact, I love Betty White…and I love dogs too.

Music note: I did not listen to any music while drawing this cartoon but I did attach the chorus of Taylor Swift’s “Betty” to the 30-second TikTok vid of this (the version without the F-word). I thought it was kinda sweet with it.