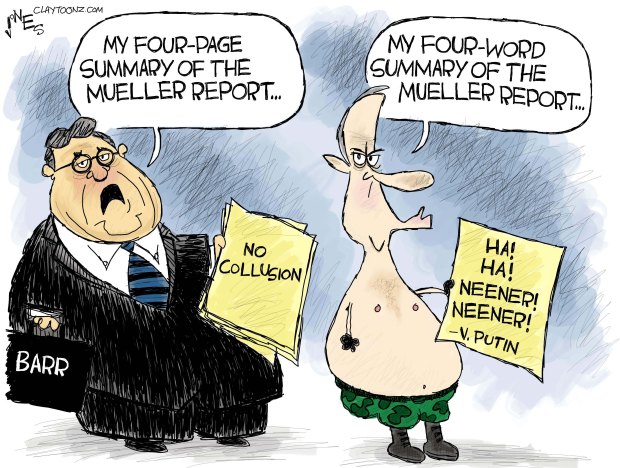 I’m a cartoonist which means I don’t do math well, but I do know two plus two equals four. Here’s another equation that’s not difficult to decipher: When Donald Trump goes from “release the Mueller Report” to “don’t release it,” and his toady Attorney General William Barr won’t confirm if the White House has seen it yet, that means Trump has seen it. At the very least, someone has read the parts to him that aren’t flattering.

The Trump team is celebrating that the Mueller Report, according to Barr’s four-page memo, clears Trump of committing crimes when it comes to collusion with Russia. What they’re overlooking are the parts where Trump and his campaign was sleazy, corrupt, unethical, and disloyal to their nation. But, yay. No collusion.

Barr is still holding back from giving the report to Congress two weeks after it was turned in to the Justice Department by Special Counsel Robert Mueller. Keep in mind, the Starr Report was handed over in two days. Barr is now “promising” to give it to Congress next week with heaps of redactions. If you get off on looking at sentences full of black boxes, this report is for you.

Donald Trump has falsely claimed the report exonerates him, which means his lying, stupid, simplistic, idiotic, kook-aid drinking, cultish, sycophantic followers are claiming he’s exonerated. Even Barr’s memo states the report does not totally exonerate him.

Trump doesn’t just deny his campaign colluded with Russia. He has denied many times in the past that Russia even meddled in the campaign, despite the fact every American intelligence agency had made that determination and his own campaign manager, son, and son-in-law were dancing with Russians in Trump Tower. Another person who loves to continue the lie is Russian President Vladimir Putin.

Tuesday, at the International Arctic Forum in St. Petersburg, Putin said the investigation was “complete nonsense” that had been invented by President Trump’s political enemies for “an internal audience.”

Putin also said, “It was clear for us from the start that it would end like this. A mountain gave birth to a mouse.” If Putin is correct and actually knows what he’s talking about regarding the report, that means he’s seen it too. I don’t know if unplanned Russian mountain sex produces rodents, but if anything, the entire situation is full of rats.

Neither Putin or Trump gets the irony of shouting “no collusion” while also echoing each other with the term “witch hunt,” which Putin used Tuesday while attacking the investigation.

While Barr is doing Trump’s bidding, he’s also doing Putin’s. While testifying to Congress on Tuesday, the same day Putin was talking about Mueller and polar bears (he was), Barr said, “The Office of the Inspector General has a pending investigation of the FISA process in the Russia investigation.” Yes. Trump’s handpicked Attorney General is investigating the investigation. He’s following in the footsteps of Congressional Trump poodles Lindsey Graham, Jim Jordan, and Devin Nunes and politicizing the Justice Department to go after…wait for it…Trump’s enemies. This is something Trump has been screaming for since he came into office…and promised to do as a candidate.

Our government is now going after people for investigating suspected Russian spies. The Trump administration and the Republican Party are more interested in defending and protecting Russian spies than our Democratic process. Protecting Vladimir Putin is more important than protecting Americans.

I have a spoiler for you about this investigation into malfeasance in the FISA requests and the investigation into Trump. They’re not going to find any criminal conduct. Even the Nunes Memo stated that investigators did not break the law in acquiring FISA warrants (EXONERATED!). But, the lesson here is if law enforcement agents do their jobs of protecting our nation against a corrupt president, then they will be punished for it. We’ve already seen numerous people fired for investigating Trump.

The Mueller Report says Trump didn’t break the law with collusion with Russia. It didn’t say Trump was clear on obstruction. Then, Robert Mueller turned the report in to Trump’s man who’s working with him to obstruct justice.

Vladimir Putin, who helped steal an American election and install the world’s biggest Cheeto shitgibbon dumbass into the presidency, is laughing his Vodka drinking, critic killing, Russian off ass.