Republicans argue that accusing them of racism is similar to the boy who cried wolf. They accuse liberals of playing the race card against them as a cheap defense against criticism. They continue to make this argument without any hint of detecting their own hypocrisy by ignoring Donald Trump’s accusation of racism against “the Squad” and Congressman Elijah Cummings. But, if you’re a Republican, you have to ignore a lot of what Donald Trump says.

Writing for The Hill, media reporter Joe Concha argues that being accused of racism comes with the territory, and quotes Lindsey Graham who said, “Something I have learned: If you are a Republican nominee for President – or President – you will be accused of being a racist.” Concha excluded Graham’s quotes when he said during the 2016 Republican presidential primaries, “Donald Trump is a race-baiting, xenophobic, religious bigot.” For Republicans, cowardice and hypocrisy “come with the territory.”

Donald Trump isn’t just a racist. He also believes his racism should be his 2020 presidential platform. While casting the Democratic Party as the party of socialism, he and his supporters are making the Republican Party the party of racists, if they weren’t that already. In 2016, Trump supporters retweeted Russian troll farm lies that the Pope had endorsed Trump. That was false, but he did score the Nazi publication The Daily Stormer endorsement.

Trump is sore about Maryland Congressman Elijah Cummings criticizing his handling of the border situation and throwing children into jail. Saturday, Fox News ran a segment attacking Cummings and his representation of Baltimore, showing the city, as their guest with ready-made video said, one of “abandoned rowhomes filled with trash, homeless addicts, empty needles” and as a place “attracting rodents and cockroaches.” An hour later, Trump echoed the dogma and said the city was “rat and rodent-infested” and a place “no human being would want to live.” This, two weeks after he told four brown, female representatives to “go back to where they came from.”

Of course, Republicans are arguing that none of this is racist, ignoring the history of using “go back where you came from” to minorities in this nation. They also seem to be unaware of Trump’s history with the word “infested” when tweeting about people of color.

Is Trump comparing people of color to disease-carrying vermin? Trump has tweeted the word “infested,” “infest,” or “infestation” eight times, five since his inauguration. Each time, he’s used it when attacking minorities.

Six days before his inauguration, Trump attacked Congressman John Lewis (who is black and a civil rights leader), and described his district as “crime-infested.” The district is 58% black.

Later that same day, Trump described all inner cities in the U.S. as “crime-infested.”

In April of 2018, Trump tweeted that sanctuary cities in California are “crime-infested and breeding.”

June 19, 2018, Trump accused Democrats of wanting illegal immigrants to “pour into and infest our country.” On June 3, he used “infestation” for MS-13.

Back in 2014, he tweeted about “Ebola infested areas of Africa” and that Americans who visit these “infested” areas would “bring the plaque back to the U.S.”

Two weeks ago during his racist tweets at the four Democratic congresswomen, he demanded that they “go back to” the “crime-infested” places from which they came.

While tweeting that he’s not a racist, Trump retweeted a British columnist who promotes the White Genocide conspiracy theory (that immigration is used solely as a mean of wiping out the white race), who used Trump’s own term while describing Baltimore as a “proper shithole.” As proven multiple times by his supporters, it’s really hard to defend a racist argument when you’re stupid.

Donald Trump is a racist. You can’t defend it. As the example above shows, who better to defend Trump from accusations of racism than white people? Fox News’ Greg Gutfeld points out the good things Trump has done for black Americans, as though having a black friend is a get out of racism jail free card. Last week, a conservative cartoonist cast one white guy telling another white guy to leave his house as the equivalent of telling four minority women to “go back to where they came from.” These people can’t think sophistically and aren’t smart enough to be pundits. Just like Donald Trump isn’t sophisticated or smart enough to be president.

I’ve been to Baltimore on multiple occasions. I don’t live that far from it. Like most major cities, there are good and bad areas. I’ve seen both in that city. I wouldn’t call it “infested” by any means, though there are a lot of crabs. But I know this. The White House is infested with racist pigs.

Creative note: Oddly enough, it’s really hard to draw a pig without it coming out cute. Friend and fellow cartoonist, Stacy Curtis, has a thing about drawing pigs with banjos. I’m sure there’s a reason why but I don’t know what it is but his artwork is amazing. I had him in mind when I was drawing this pig but I refused to look at any of his work during because that would have “infested” my drawing. I really wanted my pig to come out nasty and disgusting. Did I succeed?

I’m not saying Martin O’Malley is to blame for what happened in Baltimore. I’m saying it’s going to be really hard to run for president right after your city burns down in a riot. The same concept kind of applies to why I didn’t get remarried right after my divorce (or since).

I am glad to see another candidate in the Democratic primary. I really don’t like coronations.

I doodled this out very early this morning. I hate to say it but I like the rough better. 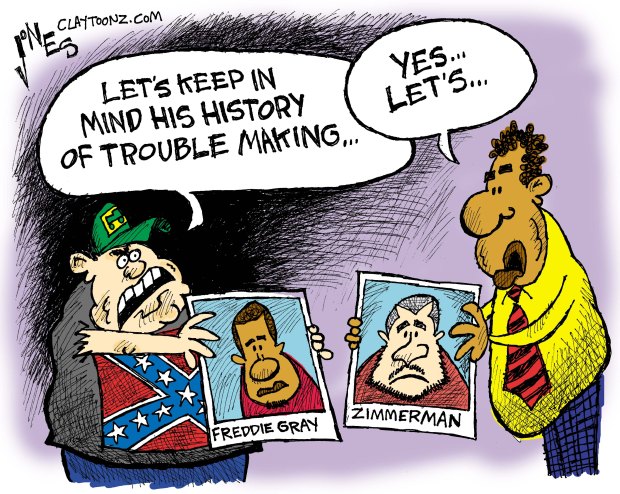 Update: There were a lot of comments on social media and at Gocomics about how I drew each officer white. Three of the six officers charged are African-American with one being female.

So why did I draw each of them white and male? For one very technical reason, I drew the cartoon before the photos were released. I was relying more on the point of the cartoon than actual caricatures of the police involved. I also did not draw two of them wearing bicycle helmets.

Another reason is that in the video of Freddie Gray being arrested, each officer is white. The three officers who chased him down, arrested him and fabricated the “switchblade” lie are white.

If I had waited two more hours then I would have seen the photos before I drew the cartoon. If I had the information I would have drawn them reflecting their race and sex.

I do like some of the comments at gocomics. Yeah. I read my criticism. I really enjoy it actually. They call me a “racist” and one called me a “reprehensible demagogue” while slightly defending me. How could I not enjoy that?

I’m sure you’ve seen the video footage of the mother who found her son taking part in the Baltimore riots. When I was about 14 years old I was with some kids who broke a window by throwing rocks at it. I didn’t even take part in it. I swear. That didn’t matter to the cops or my mother. The police kept me in the back seat of a squad car for about an hour and released me to my mom. I would have preferred staying with the cops. So to that kid in Baltimore who got busted by his mom, I feel your pain.

Everybody has an opinion on the riots. Well if you don’t know what you’re talking about, or never expressed an opinion about police profiling or brutality, then shut up.

There was a rumor going around on the internet that Freddie Gray had surgery or pre-existing injuries prior to the police giving him a 45-minute “rough ride” which nearly separated his spinal cord and larynx. All false. Just conservative lies because conservatives have to find a way to justify police brutality. Again, if you don’t know what you’re talking about, shut up.

I hear a lot of people saying if you don’t want to suffer the consequences of police brutality then you shouldn’t break the law or run from the police when they stop you illegally. There’s not justification for police brutality.

Yesterday a friend was debating this case and stated the police were charged. He got angry when I pointed out that he was wrong. No charges have been filed or even investigated yet. You break the law then you go to jail. If a cop murders someone then they’re given a paid vacation. And again, if you don’t know what you’re talking about, shut up.

I’ve seen blame placed on former Maryland governor Martin O’Malley. The blame is being given by that same group who says George W. Bush shouldn’t be blamed for Iraq or the economy since he’s not president anymore.

There’s been a lot of statements about groups going to Baltimore with guns. Oh for the love of God, will you please shut up?

Ran Paul is blaming absent fathers. A Republican congressman from Texas is blaming gay marriage. Can someone please shut these ignorant people up?

There’s a lot of people besides the rioters and looters that need to be smacked by their mommas. 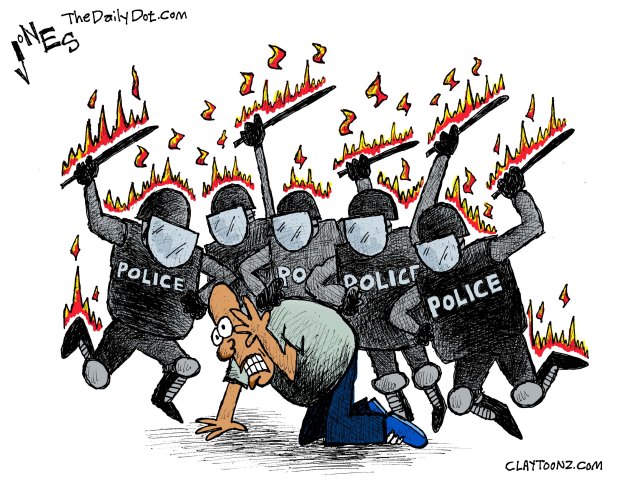 Exclusive cartoon for The Daily Dot.

People wonder how a community can destroy itself. I wonder the same about this nation’s police community.