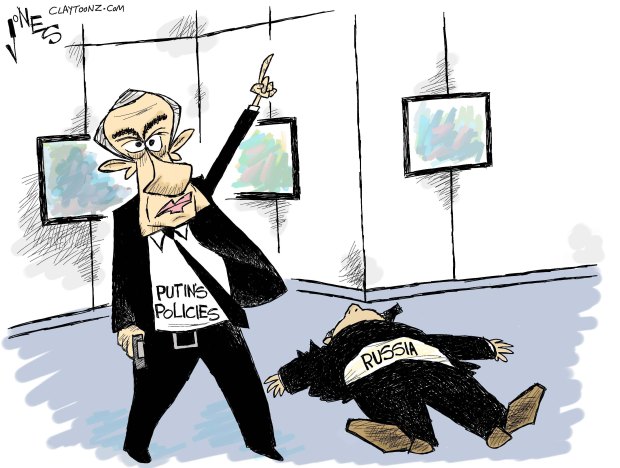 On Monday a Turkish police officer posing as a member of a security detail walked up behind the Russian ambassador to Turkey and shot him in the back at an art gallery in Ankara.

As ambassador Andrei Karlov lay dying on the floor the gunman shouted “Don’t forget Aleppo! Don’t forget Syria!” The image was captured in photos and video and shared around the world. The gunman injured several others before he was killed by police.

Since Russia entered the Syrian civil war they have claimed they’re only bombing terrorists. Others, including the United States, have accused Vladimir Putin of using his bombs not to attack terrorists, but to prop up Syrian president Bashar al-Assad, and killing thousands of civilians. What may complicate matters is that the terrorists may be on the side supported by the United States.

Turkey is not a safe place. Earlier this year they experienced a so-called coup attempt which many claim their president staged to build his support and to punish his enemies. They’ve had three major terror attacks within the last ten days which has followed a month of violence. This is a NATO nation that doesn’t resemble one.

While there’s no justification for terrorism or the killing of diplomats, Putin can find the source of this world-wide scorn in his own mirror. You can’t drop bombs on babies and not expect a backlash. The U.S. has some experience in this area.

Turkey wasn’t the only site of terrorism on Monday. Three people were injured at a Muslim prayer center in Zurich, Switzerland, and at least 12 were killed at a Christmas market in Berlin, Germany.

As our next president forges a closer relationship to Russia and perhaps Syria, we may expect some of this backlash to be directed toward us. I wonder where terrorists wishing to make a statement against an American president can find targets throughout the world where there are numerous buildings bearing his name. 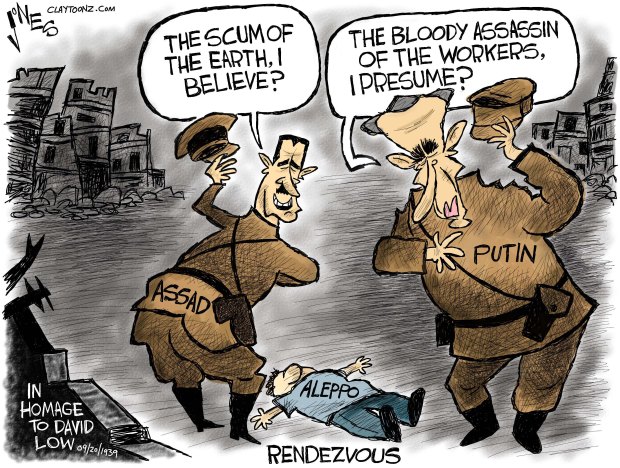 David Low was a brilliant political cartoonist from New Zealand. He started his career in his native country, moved to Australia and cemented his place in history working in England. His career spanned from 1910 to 1953. While American cartoonists were drawing humorless cartoons of FDR with his big, strong hands on the stern of a ship navigating through choppy waters with a determined and focused look on his face, Low was using wit to humiliate Francisco Franco, Benito Mussolini, Joseph Stalin, and Adolph Hitler.

Hitler, who was a failed artist, could appreciate the power of a political cartoon. Hitler went a step farther than Boss Tweed did in the 1870s who tried to buy off political cartoonist Thomas Nast. Hitler wanted Low killed.

In 1937 Hitler’s propagandist Joseph Goebbels told the British foreign minister Lord Halifax that Low’s cartoons were damaging Anglo-German relations. After the war it was discovered that Low had made The Black Book, which was a list of everyone the Nazis wanted to arrest if they had successfully invaded Great Britain.

On September 20, 1939 the Evening Standard published Low’s most famous cartoon, “Rendezvous.” It depicted Hitler and Stalin greeting each other politely during their joint invasion of Poland. That’s the cartoon I’m taking a turn with here. It’s my homage to Mr. Low.

Low’s work would fit in with today’s political cartoonists with his use of humor and satire. The British were always years ahead of us in wit, sarcasm, humor, and even cursing. Seriously, the English knack for creating new insults is on an entirely different level than ours. Example: That Donald Trump bastard is a real tosser.

This cartoon was a little difficult to draw as I was attempting to insert some of Low’s style and he’s also a much better artist than I am. What makes me geek out a bit is that while Low was fighting fascism in 1939 using pencil and charcoal, I’m doing the same today drawing on a digital platform. I won’t ever be as famous as Low or make as much of an impact, but while our work is separated by over 70 years, technology, and a vastly different state of newspaper journalism (newspapers were constantly in bidding wars for Low’s services, even moving him from a different continent and hemisphere. I’m lucky editors know my name), we’re doing the exact same thing. His fascists were Hitler, Mussolini, Franco, and Stalin. My fascist are Vladimir Putin, Bashar Assad, and Donald Trump. I’ll also include all the Nazi tossers supporting that last one.

David Low stuck around for a long time after his fascist were gone. I intend to do the same after mine are vanquished also. I like to think that David Low is somewhere traveling through the galaxies or doing whatever it is dead people do, and he is seeing my spin on his cartoon and saying “Hey, Yank. Go write your own cartoons!”. I’ll return to that tomorrow as trying to emulate David Low is really hard.

Did you like this cartoon? Want to help a cartoonist make a living? Look to the right of this page and make a donation through Paypal. I need to buy pens, paper, sandwiches, etc.. The starving cartoonist it. If you’ve donated in the past, THANK YOU!!! 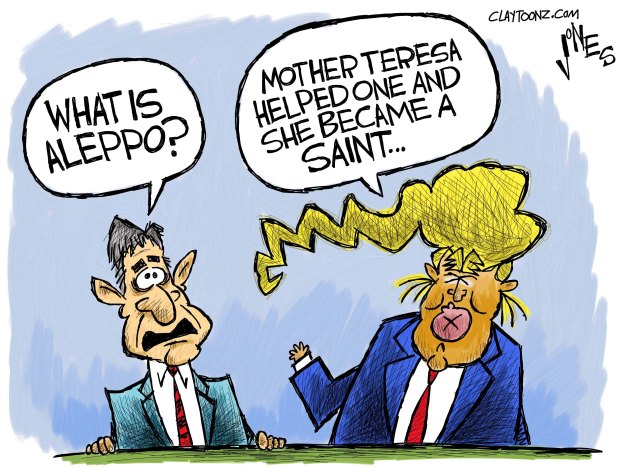 If Gary Johnson actually had any chance at the presidency, or even to poll at 15%, he blew it Thursday morning on the MSNBC program Morning Joe.

The Libertarian nominee proved that he has no interest in foreign policy and he’s not qualified for the job he’s seeking.

Aleppo is the largest city in Syria and it’s been the center of intense fighting, massive war crimes and an ongoing humanitarian crisis sending refugees, many risking their lives, to Europe and the United States.

Johnson later said he was confused and thought he was hearing an acronym. I think that’s refreshing because when Trump gets caught confused or lying, he later blames an ear monitor or the host, and eventually denies it ever happened.

Johnson tried to rebound during the interview and gave an answer that could have used some Cliff Notes assistance. Donald Trump’s answers during a national security forum Wednesday presented us with a man even more ignorant on foreign policy. While an unqualified Johnson is kinda laughable, an unqualified Trump is scary as he actually has the possibility of becoming president.

Trump again denied ever supporting the Iraq war. He pointed toward an article quoting him against the war, published a year after the war started. Lucky for Trump he was being questioned by Matt Lauer who normally gets tough with the likes of One Direction.

He believes we should have stolen oil from Iraq. He has a secret plan to deal with ISIS that he won’t tell us but after he’s elected he’ll ask the generals for a plan. Let’s hope it’s better than his previous statements on using nuclear weapons.

He blames sexual assaults in the military on men and women serving together, which is again blaming women. To deal with the issue he wants to replace the military’s court system with a military court system. One wonders what advice he’ll receive on this subject from Roger Ailes.

Trump claimed the classified briefings he’s receiving as a candidate reveal that Obama and Hillary Clinton have ignored the military’s advice. This may be the first time a candidate has used the briefings to score political points and it’s also a huge fabrication. Maybe he confused the briefing with the letter he got from the NFL, or the one from the Chicago Police.

The scariest stuff to come from Trump is his admiration and desire for a bromance with Russian president Vladimir Putin. He claims Putin is a better leader than Obama which begs the question of whose side Mr. Trump is on.

He said he didn’t approve of the Russian system but at least Putin had control of it. This should alarm everyone if Trump views leadership as having control over the entire system, like a dictator. We have three branches of government for a reason and I still want someone to ask Donald to name them.

Trump admires a man who has overseen the murder of political opponents and journalists, the rigging of elections, a global campaign of disinformation and a foreign policy whose first aim is to increase Russian influence at U.S. expense. Not to mention his interventions in Syria and land grabbing from the Ukraine. Trump tries to paint that Obama has done worse. really?

Trump claims he knows more about ISIS than the generals. He says he’ll have new generals after he’s elected but he probably doesn’t know the Extra Crispy Sanders guy in the KFC commercials is only a colonel.

Speaking of commercials, I think we can put Trump and Johnson in a car with a couple of ice cream sundaes and they can replace the morons in the Sonic commercial.