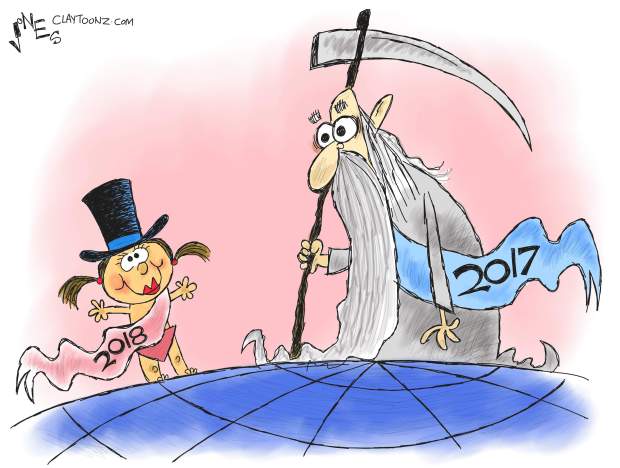 Yesterday, I summarized the dumpster fire that was 2017. Today, I’m focusing on the largest positive to come from the last year, and it’s a shattering one. Shattering for Republicans.

I personally wanted Time Magazine to select Colin Kaepernick as their Person of the Year just to spite Trump. The Twitter tirade would have been glorious. But the magazine made the correct pick in selecting the “silence breakers.”

Time focused on women who came forward who were sexually harassed, assaulted, or both by powerful men in politics, entertainment, business, and journalism. That is just a part of the power women exerted in 2017. Women were a force to be reckoned with in 2017, and they delivered results. I expect them to grow louder and more powerful in 2018, and I think it’s the best thing we have going for our nation right now.

There will be midterm elections in 2018 for seats in the House and Senate. Traditionally, the president’s party loses seats and often control of Congress. Democrats may not take control of either chamber of Congress, and may even lose a seat or two in the Senate, but they’re definitely gaining seats in the House. Donald Trump is the least popular president in American history and a tidal wave is coming. A very pissed-off tidal wave.

Trump’s cabinet selections left Congressional vacancies in Montana, Georgia, Kansas, and South Carolina. It also left a vacancy in the Senate in Alabama. Naturally, these were Republican seats which should have been safe for their party. Republicans did win each of the elections for the House but only by narrow results, sometimes by single digit numbers which were much less than the previous Republicans had won.

Alabama was a different story with Democrats taking the seat. Granted, the Republican nominee was an accused pedophile who should have been rejected even before the accusations came to light. He was a lousy candidate who was kicked off the state Supreme Court TWICE, believed in conspiracy theories, wasn’t aware of current issues, exhibited bigotry, waved a gun at a rally, couldn’t ride a horse, and he still hasn’t conceded. However, it’s still huge that Alabama is sending a Democrat to the United States Senate. This is a state where Trump has his highest approval rating, and the state still ignored his endorsement of the accused pedophile.

It wasn’t just women who put a Democrat in Alabama’s Senate seat, it was black women. Does anyone else think it’s ironic that the horse was female?

Republicans are in trouble. There are 23 GOP-held seats that were won by Hillary Clinton. There are 17 additional seats Trump won with less than 50 percent. While some of these contain entrenched incumbents, there are more than 24 opportunities for Democratic Party gains, which is the number the party needs to win control of the House. I hope the Democrats take the House because it will be fun watching Trump deal with Nancy Pelosi.

Voter turnout, especially among Democrats, is usually lower in non-presidential years. That hasn’t been the case so far. Left-leaning voters, and people generally sick of Trump are voting, particularly women. Usually, only Republicans who watch Fox News are in a constant state of being pissed off.

Women’s impact was felt in the elections for Virginia’s governorship and General Assembly. Many experts predicted we’d have a Republican governor. Instead, Democrat Ralph Northam won with 53% and Democrats also took the offices of Lieutenant Governor and the Attorney General. Even more surprising, Republicans lost 15 seats, and possibly a 16th depending upon the results of an upcoming court case and potential coin toss.

Eight of those seats were held by Republican male incumbents, and they were knocked out by female candidates. The odds are always against challengers to unseat incumbents, but this is an even more amazing accomplishment in districts gerrymandered in favor of Republicans.

Democrats won 61 percent of the women vote, and in New Jersey (which voted on the same night), women gave Democrats 55 percent of theirs. Republicans, y’all in trouble.

The year kicked off with a Women’s March held the weekend after Trump’s inauguration, meant to send a message to Trump and his administration that women’s rights are human rights. It was reported that at least 408 marches were held in the United States and 168 in 81 other nations with over five million people attending.

Donald Trump does not like women. He is threatened by them. He takes a different tack and tone when it comes to attacking them, especially if they’re minorities.

Trump is decades beyond becoming an enlightened individual. If the guy was ever going to gain maturity it probably would have happened before he spent $85,000 calling for the death penalty of five innocent black and Latino Harlem teenagers in 1989.

Creative note: This is a really simple cartoon. The Old Man New Year/Baby New Year cliché is one I use almost every year. I don’t mind this cliché because you can always put a spin on it. This cartoon is either going to go over really well or with a big thud. A lot of people may just go “meh.” But, since this was really simple for me and I have a few other ideas and subjects I want to hit this week, you’re getting another cartoon later today.