Check out more great content at The Daily Dot. 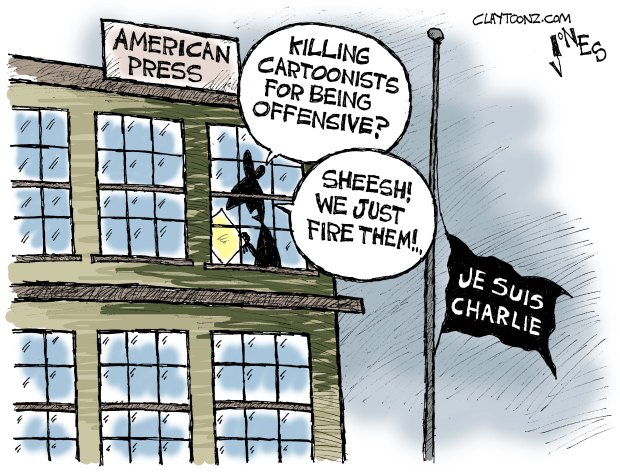 A lot of people think it’s an editorial cartoonist’s job to offend. I don’t agree.

Several years ago after a Dutch newspaper incited wrath and death threats from Islamist extremists for running a bunch of cartoons depicting Muhammad, my employer debated running the same cartoons.

It was our oped editor’s idea. The editor of the newspaper called a meeting of the oped editor, editorial page editor and myself (being a cartoonist he thought I might have some experience with the matter). The editor was really surprised when I voted against running the cartoons. He thought I would love any opportunity to be offensive. Not at all. I explained my position to him, which also gave him a course in what a political cartoonist’s job actually is.

I explained that running the cartoons at that point was not making a statement. Running them would only serve to offend. A good cartoonist, or any satire, is not to offend people. It’s to put out a viewpoint that makes people think and often challenge readers. If a reader chooses to be offended then that’s a byproduct, a byproduct no publication should be afraid of. If a cartoonists is only working to offend then he’s not a cartoonist. He’s a troll.

But many are afraid of offending readers.

A few months ago a client of mine in Tennessee canceled running by cartoons because they were in a military community and they received too many nasty letters. No death threats, just threats to cancel their subscriptions. The editor said he loved my work but he couldn’t continue to incite outrage among his conservative readers. I’ve received the same message from other editors (a lot in Texas). I’ve even had editors ask me if I could change my viewpoints (they’re in Arizona).

Here’s my point with this cartoon (in case it’s not clear): a lot of American publications and their editors are cowards. Death threats are rare in the U.S. But it doesn’t take a death threat to scare an American editor. Tell them you’re going to tweet something nasty.

I do continue to have clients that are not afraid of strong cartoons. Thanks to all of them. I had one in Las Vegas write me this week that my cartoons have inspired several letters recently and that I need to keep it up. I love editors like that.

Now if only more newspapers would hire cartoonists.