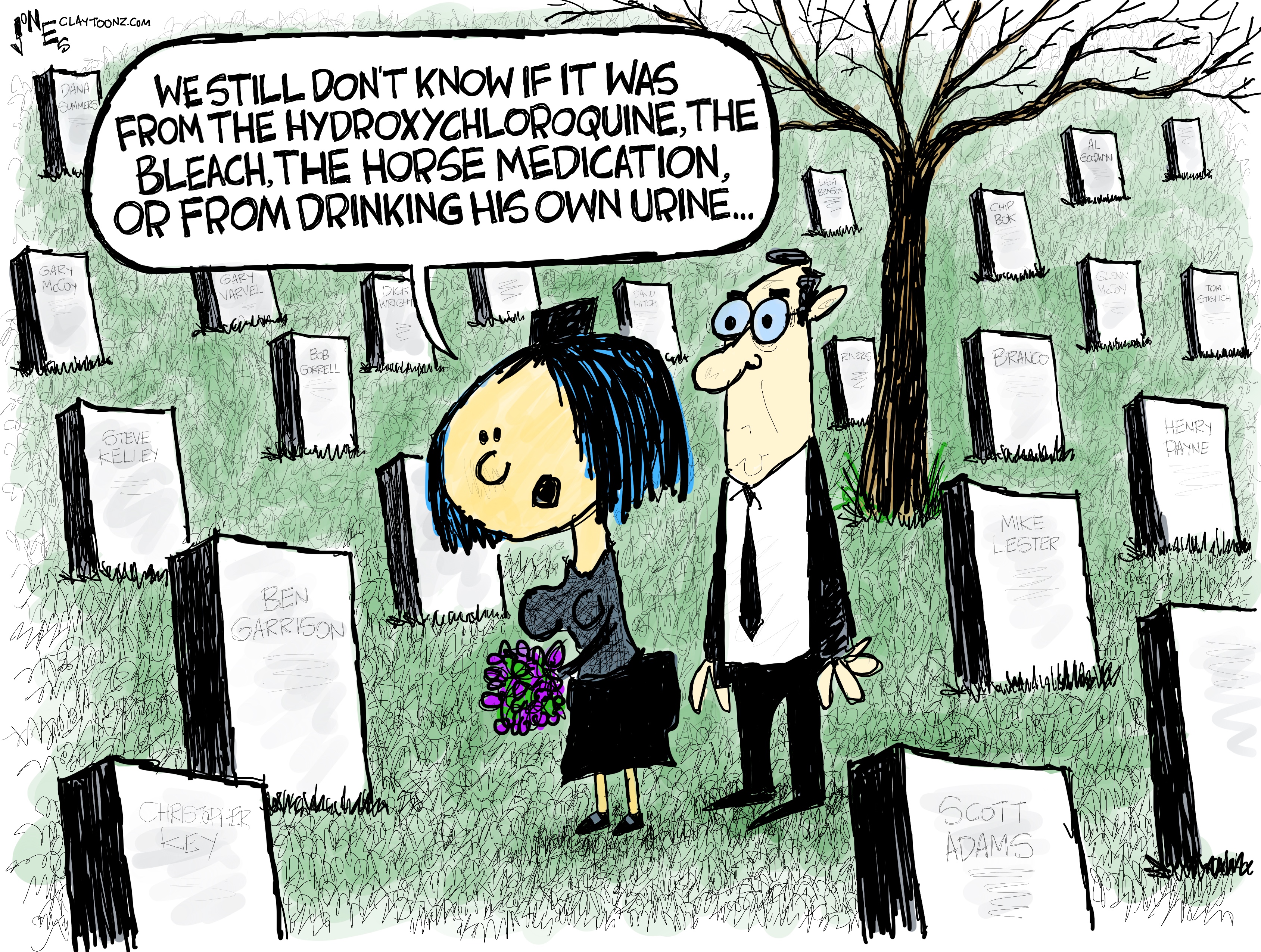 The anti-vaxxers with the bogus cures are now promoting another bullshit treatment. But in this case, the bullshit is urine. Seriously.

Some of these idiots have ingested cleaning products made for fish tanks. Others on the advice of Donald Trump have shot bleach up their asses. Thousand upon thousands have taken medication that’s for livestock. Now, one of these hoaxers is telling us the cure is to drink urine. Wait. Not just any urine, I don’t think, but your own urine.

Christopher Key is an Alabama anti-vaxxer with an online cult following. He uses his website not just to rant against vaccines for the coronavirus, but to spread false information.

In the past, he told pharmacists that what they’re doing by giving out vaccinations are committing “crimes against humanity.” The same could be said for Key by spreading false information. Key said if the pharmacists “do not stand down immediately, then they could be executed.” He claims “they can be hung in the state.” Sure they can…and if they’re hung in Alabama, then they’re most likely hung in any other state they visit, but I’m not sure what that has to do with vaccinations.

Key went to a Missouri Walmart to harass people. Now I know there are Walmarts in Alabama, but he was invited by some fucknut crusade to a rally in Missouri.

Key has also sold deer antler spray for athletic injuries on his website. He’s also sold “concussion caps” to football players to avoid injuries. The caps are actually just beanies, which means he’s forcing football players to become hipsters. Ever see a guy wearing a beanie in August? That’s a hipster. It annoys me more than fuckers wearing face masks under their noses.

I saw a guy in Giant yesterday with his nose sticking out of his face mask. The dumbest part of this is that face masks are NOT required in Virginia. Why are people doing this when they don’t have to wear the face mask? It’s like putting the helmet on the back of your motorcycle. Look. There is it. We can all see it but it’s not where it’s going to help you.

Standing outside a Walmart, where we’ve all seen crazy people shouting at people, inanimate objects, and the sky, Christopher Key yelled at an employee, who was probably rounding up shopping carts, “If you allow one more shot in one more person’s body, you yourself will be executed in violation of the Nuremberg Code. We don’t want that to happen to any of you guys at all. We love you guys. We want to keep you safe.” Yeah, sure. Then he went to a Walgreens and a CVS to harass those employees. Seriously, if you’re going to protest anything at CVS, it’s them wanting your phone number to check you out. You don’t need my phone number to sell me a plunger. A plunger was the last thing I bought at a CVS, which was Christmas day, 2020.

And again, I digressed.

Key has also claimed that hospitals are putting people in comas and on ventilators just for having a common cold. At the Missouri event, the lunatic organizers used fog machines as part of their presentation and Key initially thought it was an anthrax outbreak.

In December, claiming he’s the “vaccine police,” Key threatened to go to Louisiana and arrest Governor John Bel Edwards for vaccinating children in the state.

Key said, “I am the vaccine police,” which has less legitimacy than when Beavis shouts, “I am Cornholio.”

He claimed, “We have shut down pharmacists. We have shut down boards of education. And we will be arresting the governor of Louisiana on February the 7th if he does not stand down and not vaccinate the children of Louisiana.” I’m going to tell Alexa to remind me to check on this on February 7. Maybe he’ll do it…if he’s not in jail. More on that in a minute. Key has been on a cross-country tour with a flamethrower to arrest other Democratic governors.

Do flamethrowers fall under gun laws? Is it legal to sell an insane person a flamethrower? It’s probably legal in Alabama.

Key said he would conduct the arrest “out of love,” because “they are trying to start a civil war” and “coming for our children.” Yeah, coming to save children who have fuck-head parents.

Key said the cure to the coronavirus is to drink your own urine. He brought us this revelation straight from jail, where most new medical breakthroughs are known to occur. Listen, Christopher, I don’t care if you like the toilet wine but drinking your own pee isn’t a cure except for maybe fresh breath. Opposite of Mentos, urine is the unfreshmaker.

So, why was Key in jail? He was arrested for trespassing at a Birmingham Whole Foods for refusing to leave because he wouldn’t wear a face mask. I know it’s shocking. There’s a Whole Foods in Alabama? In court, Keys told the poor bastard the court appointed to be his attorney, “I’m not insane.” Sure, he’s not insane, and did I mention the flamethrower?

Immediately after getting out of jail from the whole Whole Foods incident, he told his followers to drink their own urine.

I have some questions. For this pee cure to work, is it mandatory that the pee you drink must be your own? I mean, what if it’s a friend’s pee? Is it a DNA thing? If so, can you drink your sibling’s pee? What if the pee is from a Russian hooker? Can your pee be mixed with other people’s pee? If bullies give you a swirlie, can you count that as immunity? If it’s not your own pee, are you doing it wrong?

Key said, “The antidote that we have seen now, and we have tons and tons of research, is urine therapy.” Yeah, you need to be in therapy. He also said, “I know to a lot of you this sounds crazy, but guys, God’s given us everything we need.” Yes, God has given us our pee…and flamethrowers.

When reached for further comments, because we really need to hear more of this, he said “This vaccine is the worst bioweapon I have ever seen. I drink my own urine!”

I guarantee that the type of person who follows this advice will be sitting next to me the next time I’m on a bus.

Someone really needs to put the urine-drinking flamethrower guy, not into jail, but into an asylum. Don’t do it out of hate. Do it out of love.