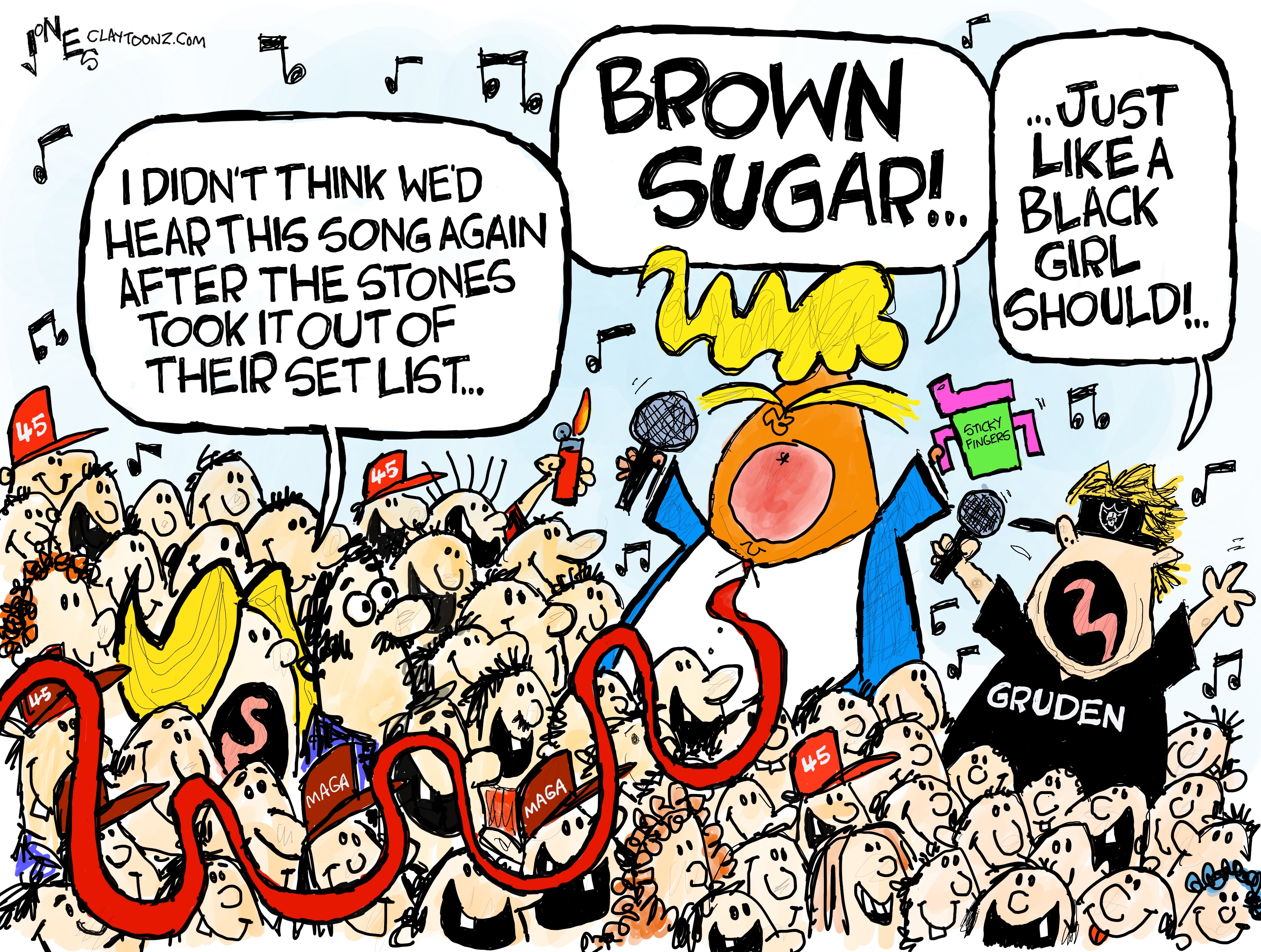 The Rolling Stones have removed the song “Brown Sugar” from their set list. They’ve replaced it with “Baby it’s Cold Outside.” HAHAHA. I slay myself…but…wait. Why are the Stones touring right after the death of their drummer Charlie Watts? Have some respect, dudes. But then again, time is not on their sides.

And for years, I was misinterpreting some of the lyrics. Hey, I never looked them up until last night. But for a long time, I thought Mick sang, “He even went to wham just around midnight.” Since I heard this long before the group Wham! came along, I thought it was reference to a party or a rave-like think.

“Hey, you going to wham around midnight tonight?”
“Sure, I’m hoping to check out some brown sugar.”
I didn’t know. In the song “Miss You,” Mick sings that a friend is bringing some Puerto Rican girls that are just dying to meet him. Mick is very specific about the girls he’s planning to do. Black, Puerto Rican, his sister, etc.

As it turns out, he wasn’t referring to “wham.” He was referring to whipping slaves. Jesus fucking shit, this song is way worse than I thought it was. The line in the first verse is, “Scared old slaver knows he’s doing alright. You can hear him whip the women just around midnight.” Yeah, that’s not nice. Why are the Rolling Stones singing this shit? Oh, yeah. In another song, he literally sings he’s the devil.

But, “Brown Sugar” gets worse. Yes, way worse. It goes beyond slavery and racism, and into pedophilia. Near the end of the song, Mick sings, “I’m no schoolboy but I know what I like.” And then he returns to singing, “Why you taste so good.” While the Stones say the song is about the “horrors” of slavery, there are references to rape and hard drugs. There are also references to a house boy, slave ship, cotton fields, rape, and drugs. It never stops. But, the riff is really cool and Charlie plays the hell out of the drums. It’s probably OK if you keep listening to it because you don’t understand the lyrics, though now that I’ve read them, I’ll never not hear them again.

Don’t take my word this song is racist. Take it from conservatives who are upset it’s being removed. If conservatives are upset someone’s being “canceled,” then it’s most likely racist. Kyle Smith wrote for the National Review that he never knew the song was even about slavery or racist because he never understood the lyrics. That’s fair, but the name of the song is literally, “Brown Sugar.” If you don’t think that’s racist, Mr. Edwards, I challenge you to walk up to any black woman in the United States, or anywhere in the world, and say, “What’s up, brown sugar.” Let me know how she reacts. I bet you learn something.

Smith points out in the 50s and 60s, it was conservatives who were trying to remove songs and today, it’s liberals doing the “canceling.” But, conservatives wanted rock itself gone. It was the Devil’s music and it was a sin to listen to. Nobody was upset Elvis was singing about a hound dog…but upset over the beat and his hips. Liberals don’t really want songs gone. We just think stuff like sexism, racism, rape, pedophilia shouldn’t be glorified. If you have a problem with songs glorifying racism and pedophilia not being played on your favorite Spotify station, you can always listen to David Allen Coe. Trust me. That shit’s racist.

The context with songs should be realized and understood. I seriously doubt that when Neil Young sings about shooting his baby down by the river, that the guy really wants to kill his girlfriend. But then again, Lyndyrd Skynyrd sang about Mr. Young, “The south don’t need him around anyhow.” Maybe because of what went down by the river.

But maybe with the Stones removing “Brown Sugar” from their set list, Eric Clapton will start playing it. He doesn’t write his own songs anyway.

But the thing is, kids: Cancel culture did not cancel “Brown Sugar.” The Rolling Stones canceled “Brown Sugar”. But, Keef is still trying to understand why the 1971 hit from the album “Sticky Fingers” is a problem. He said, “I don’t know. I’m trying to figure out with the sisters quite where the beef is. Didn’t they understand this was a song about the horrors of slavery?”
Keep in mind, Keith Richards did heroin for about 50 decades. He is literally saying he doesn’t understand why some think it’s racist, so he’s going to ask the “sisters.”

I don’t think the Rolling Stones are racist. At most, they’re probably really obtuse. For instance, Keith Richards is saying the song is about the “horrors” of slavery while ignoring the horror of Mick Jagger trying to taste an underage girl. Is this an R. Kelly song?

To be fair, “brown sugar” may have a double meaning which is part of the art of rock and roll. Here, it’s “tasting” heroin and an underage black girl.

Mick Jagger kinda gets it, but Mick is a businessman and the Rolling Stones is more of a corporation today than a rock-n-roll band, or as Paul McCartney recently called them, a “blues cover band.” Mick said, “We’ve played Brown Sugar every night since 1970, so sometimes you think, ‘We’ll take that one out for now and see how it goes. We might put it back in.” Mick has actually been self-censoring the words at concerts for years. Nobody noticed because it’s Mick singing.

Mick may have even forgotten what he was talking about as it was written in 1969. He told Rolling Stone (the Magazine), “God knows what I’m on about on that song. It’s such a mishmash. All the nasty subjects in one go.” In 2015, Vulture Magazine claimed the song was originally titled, “Brown P-word.”

This discovering of racism in “Brown Sugar” isn’t new. Mick Jagger told Rolling Stone Magazine 26 years ago, “I never would write that song now. I would probably censor myself. I’d think, ‘Oh God, I can’t. I’ve got to stop’. I can’t just write raw like that.” It should be noted that the Rolling Stones have also protested racism in their songs. Take the lyrics in “Satisfaction” for example:

When I’m watchin’ my TV and a man comes on and tells me
How white my shirts can be
But, he can’t be a man ’cause he doesn’t smoke
The same cigarettes as me

The Rolling Stones should be an anti-racist band as their entire repertoire is taken from black music.

Maybe racist Donald Trump, and his future running mate, racist Jon Gruden, can remove “You Can’t Always Get What You Want,” from being played at his hate rallies, like the one in Tulsa that killed Herman Cain, and replace it with “Brown Sugar.”
Just like a racist old white boy should.

Notes on my book, Tales From The Trumpster Fire: There are FOUR copies of my book in stock, which go for $45.00 each, signed. Also, I have copies of my first book from 1997, Knee-Deep in Mississippi available for $20.00.