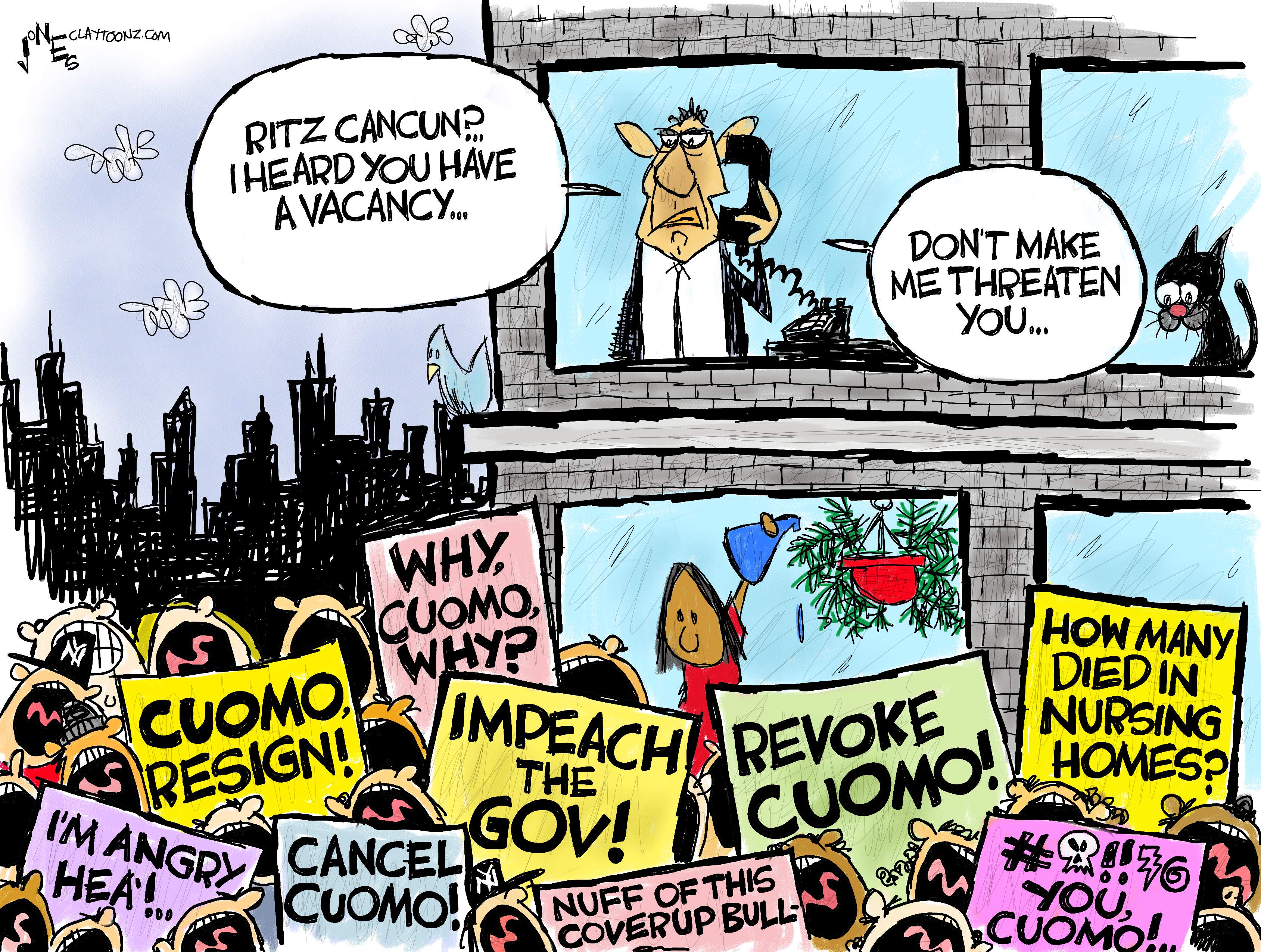 I’m interested to see if the landscape has shifted since my last cartoon on New York Governor Andrew Cuomo and all the brouhaha he’s in over his coverup of counting nursing home deaths. Or better yet, let’s see if liberal perceptions have shifted since Pete Davidson’s impersonation of Cuomo on the last episode of Saturday Night Live (I didn’t know Pete had that in him). What I’m wondering is: Will it be more accepted by liberals to criticize Andrew Cuomo, or more to the point, can I draw Cuomo and not get as much blowback as I did last week?

After a little googling, I saw that SNL isn’t the only one tying the Cuomo scandal with the Cruz scandal. Do you know how you know what you did is bad? When you’re being lumped in with Ted Cruz.

Cuomo has never been the darling of the far left. One of those Sex in the City actresses opposed him from the far left in the last election (I’m sure every guy who was ever forced to watch that show by his woman made sure to vote for her) Sure, liberal Democrats like the guy but he’s always been subject to criticism within his own party. He’s long had a reputation for being a rough guy. When a New York state Democratic legislator claimed Cuomo threatened him over the phone, saying the governor said he “hadn’t seen his wrath and that he can destroy me,” a lot of Democrats said, “Yeah, that sounds about right.”

Queens Assemblyman Ron Kim criticized Cuomo over a pause in the release of data on coronavirus deaths in state nursing homes. Kim says Cuomo had never spoken to him before in his life until he called and demanded that he help with the coverup. He criticizes how the job is being done, then the guy doing the job calls and tries to bully the guy doing the criticizing into helping coverup the facts. Them some big apples right there. That’s never good. New York City Mayor and fellow Democrat, Bill DeBlasio said with Cuomo, “The bullying is nothing new.” But unless a recording comes out, this shall remain a case of he said-bully governor said.

My last cartoon on this scandal was posted at GoComics on February 17. It didn’t get a lot of love on social media platforms either but GoComics is the place for me to see the most comments on my cartoons. Admittedly, a lot of times it’s an echo chamber. Not for my last Cuomo cartoon. On the 17th, my Cuomo cartoon received 51 comments which is an average day for me with comments, but what was unique was how many were unhappy I took on Cuomo. When I say “unhappy,” I mean pissed.

There was some, “What’s wrong with Clay?” Someone wrote, “Clay Clay is Cray Cray.” Someone jumped on me for criticizing without offering a solution. There was a lot of whatabout in comparing Cuomo to Trump. And there was even an accusation that I had “drank the Kool-Aid.”

Here’s the thing, kids: If you think a politician who miscounted deaths, engaged in coverups, and has been accused of making threats to help with the coverup should not be criticized or questioned, then I’m not the one who drank the Kool-Aid.

Offer solutions? Did you demand I offer solutions when I went after Trump over the past four years? Why are the standards different when I go after Democrats than when I go after Republicans? It’s like when a Republican says I’m “biased” and posts dozens of right-wing cartoons. And I do have a solution to Cuomo’s coverup and threatening people. Don’t engage in coverups or threaten people!

“Cray cray?” I hate that term more than I hate “anywho.” Anywho, who the fuck are you to say I went cray cray? I have always been like this and sure, maybe a major university should be studying it, but it’s nothing new.

As for the whatabout: Stop it. Stop that right there. Kill it dead in its tracks. Nip it in the bud. Why? Because you are NOT a Republican. I spent the past four years and then some tearing Donald Trump apart. I spent the past year and then some exposing his failure handling the pandemic. I did cartoons on “anyone who needs a test, gets a test,” to “like a miracle, one day it’ll disappear,” to him “downplaying it,” to his suggestion that everyone drink “bleach.” I also went after conservatives for lying about the numbers of people who died from the virus. Now, when a Democrat has done the exact same thing, I’m supposed to lay off?

I am not Ben Garrison. I am not either of the McCoys, Thing One or Thing Two. I’m not Gary Varvel. I’m not Michael Ramirez. I’m not Mike Lester. I am not…what’s his name again? I.P Freely Branco? Anyway…Who are those guys? Those are a bunch of cartoonists you can rely on to only criticize one side. Unlike those dudes, this dude is not in a cult and this dude does his job. And I even like Andrew Cuomo.

I am a liberal political cartoonist but that doesn’t mean anyone gets a free pass…even people I like and even people I voted for (though I didn’t vote for Cuomo because I don’t live in New York). In fact, I should hold liberals to a higher standard. And quite frankly, you should hold yourself to a higher standard. Let the other side whatabout. You are supposed to be better than that.

Governor Andrew Cuomo is a better human being than Donald Trump and did handle the pandemic a lot better than the former and now-disgraced president (sic) did. But is that the bar we now hold politicians to? Speaking of higher standards, let’s have some. Just better than Trump is not the standard we should accept. We shouldn’t look at an issue and say, “Well, he made a boneheaded move that led to the deaths of over 10,000 people, he lost count of them, tried to cover it up, and gooned some people to help him cover it up…but it’s still better than Trump.” Really? And sure, that is still better than Trump, but really?

If you have a problem with me taking down the people who need to be taken down, then you have the wrong cartoonist. Now, what’s your mom’s address?

Notes on my book, Tales From The Trumpster Fire: I have NINE copies of my book in stock, which I’m selling for $45.00 each, signed. Also, I have copies of my first book from 1997, Knee-Deep in Mississippi available for $20.00.