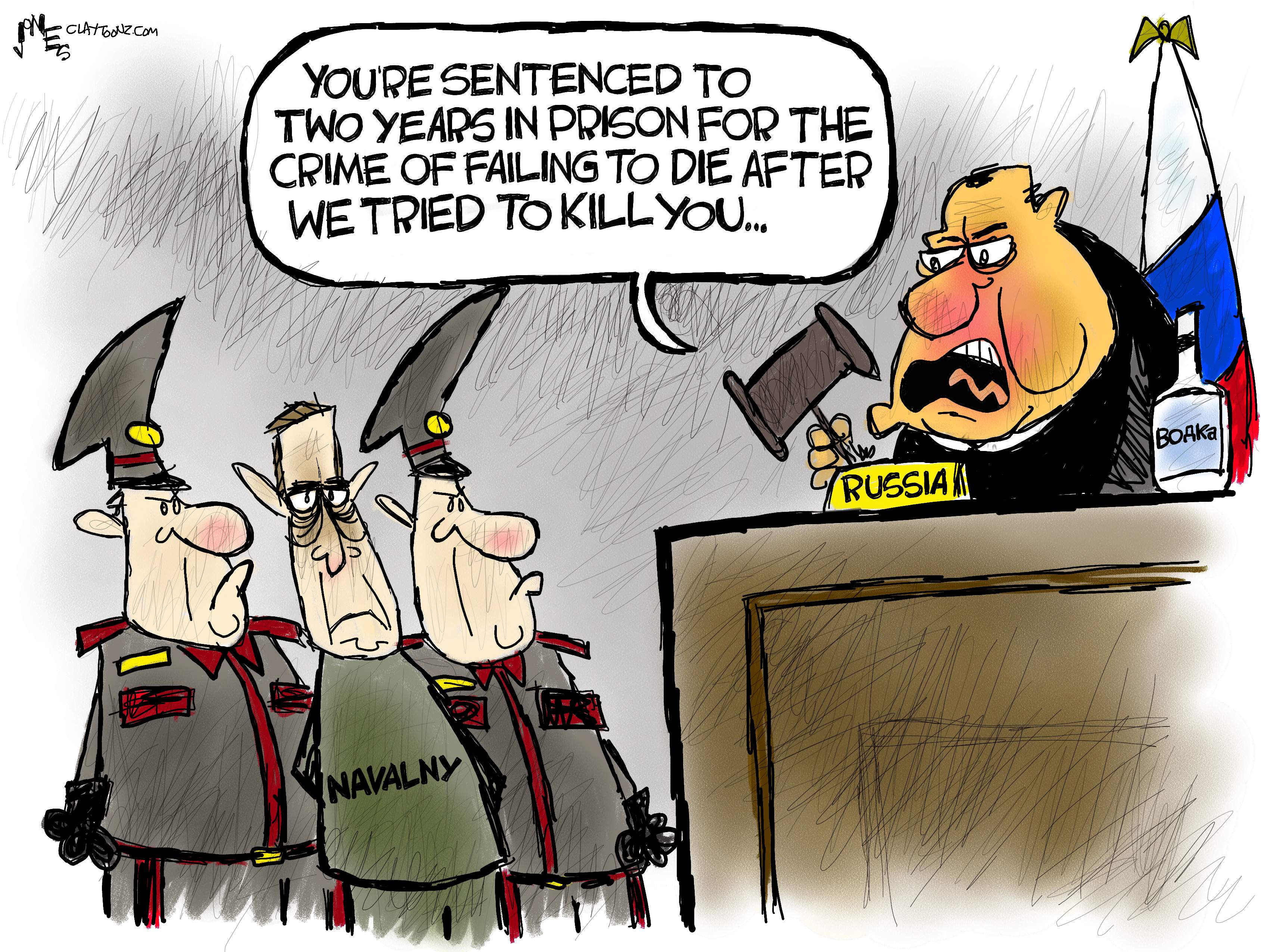 Russia has sentenced the Kremlin’s and President Vladimir Putin’s loudest critics, Aleksei Navalny, to two years in prison. His crime? Violating probation by leaving the country. Why did he leave the country? To receive medical treatment. What did he need medical treatment for? Because he was poisoned. Who poisoned him? The Russian government poisoned him. Basically, he was sentenced to prison for not dying.

If you don’t want to go to prison in Russia, then do them the courtesy of dying when they try to kill you. Sheesh!

Navalny has been a huge thorn in Putin’s side by being an opposition leader to his government. What’s wrong with Putin’s government? For starters, Putin’s been in charge of the country for over two decades, critics (journalists) get poisoned, and his courts throw the critics in prison after he fails to kill them. To be fair, he doesn’t poison all critics. Some are shot in the head and others are thrown off tall buildings.

Russia is corrupt. This week, Navalny’s team released a report on YouTube describing a secret palace built for Putin. The Russian president already has eight “official” homes and there are several that are unofficial. He’s like Saddam Hussein with that shit. Putin’s wealth is also estimated to be between $70-200 BILLION. Do you see why Donald Trump is in love with this guy? Rich, evil, and clinging to power while silencing critics. What’s not to love for a fascist wannabe?

The judgement of the Russian government had been that placing Navalny in prison would look really bad and only increase his profile, legitimacy, and give strength to the opposition. So, instead of throwing him in prison, they placed him on probation on some made-up bullshit charges. Then, they tried to kill him.

They tried to kill him by poisoning his underwear. Seriously. In court, Navalny said, “His main resentment against me now is that he will go down in history as a poisoner. There was Alexander the Liberator and Yaroslav the Wise. Now we’ll have Vladimir the Poisoner of Underpants.”

Critics in Russia are clumsy. When they’re not putting on the wrong underwear that can kill them, they’re tripping and falling out of windows in skyscrapers. In the past. Putin has imprisoned people running against him in presidential elections. Putin has been able to cling to power and not once has he had to hold a rally to incite his followers to attack the Kremlin.

Another reason the government may have wanted to silence Navalny with a prison sentence is that he’s smarter than they are. After they tried to kill him, he called the guy who did the poisoning, and tricked him into confessing.

Navalny called Konstantin Kudryavtsev, a chemical weapons specialist at Russia’s domestic intelligence agency, the Federal Security Service, and pretended to be an aide to a senior Russian security official preparing an urgent report on what went wrong in the mission.

It went like, “Hello, this is an aide to important government agency in charge of poisoning critics and NOT a trick phone call by someone you poisoned. So…what went wrong?”

What did the poisoner say? He said, “The priority was maximum secrecy. So that no one could record it, no one saw anything they didn’t need to see, and so on.” He then blamed Nevalny’s survival on the pilot (he put the underwear on at his hotel and the poison kicked in while he was on a plane) for landing too soon and on medical workers for doing their jobs. He said, “If it had taken just a little bit longer then, possibly, everything would have ended differently. You see, this is where coincidence is the worst factor we can have in our work.”

Navalny also discovered that Russian government goons had been following him for months. Every time he traveled, they’d be in the same plane, bus, hotel, elevator, etc.

Vladimir, the Poisoner of Underpants, scoffed at the claim of the assassination attempt and said in a very convincing defense that if if Russian agents had wanted to kill Navalny, “they would have probably finished the job.” Then he said, “Bwahahahahahahaha.” But you see, Vlad…it’s that “probably” thing. “Probably” doesn’t mean “all the time.”

At the end of the trick phone call, where Navalny probably used the name Seymour Buttskis, the poisoner asked, “Is it OK that we talked on a normal phone line?”