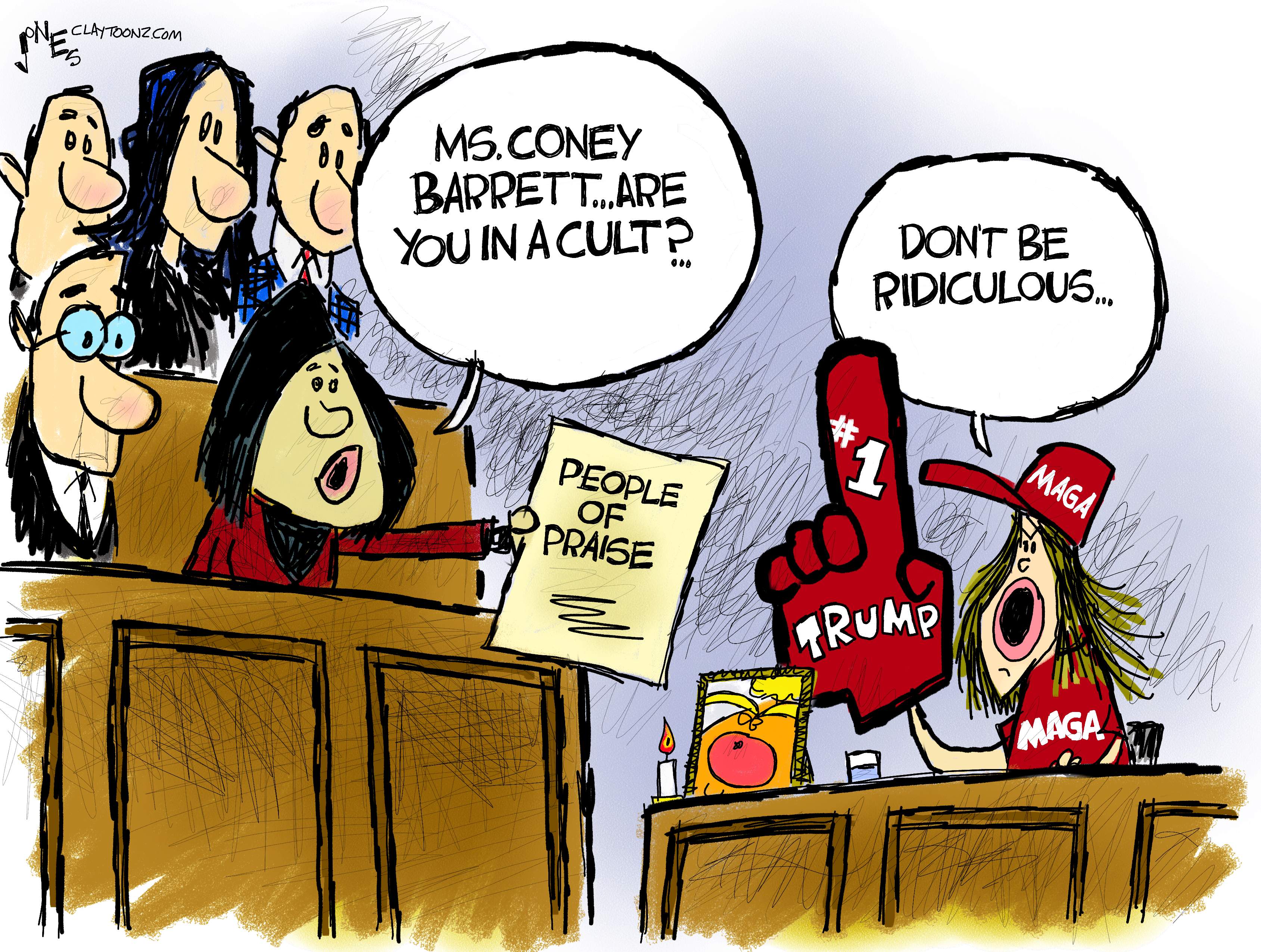 Amy Coney Barrett is a a judge for the 7th Circuit Court of Appeals based in Chicago and the current darling of the right-wing frenzy-feeding evangelical fucknut base. And if this is who they want, Donald Trump will give her to them. Hell, he was literally polling the crowd at one of his hate rallies this week.

Donald Trump is expected to announce Coney Barrett this Saturday, but who knows. Maybe he’ll surprise us and find someone even worse, but I doubt it. His base wanted her before he named Kavanaugh…but Trump needed white men first. But right now, his base wants Coney Barrett.

Why do they want Coney Barrett? They expect her to be the final vote banning abortions, killing Obamacare, making birth control illegal, outlawing gay marriage, and forcing every woman in the nation to wear a chastity belt.

Naturally, a conservative of this caliber is religious. She’s not just religious and a Catholic…she’s in a cult. Which makes me ask, can a person be in two cults?

Amy Coney Barrett is a member of the People of Praise, which is described as a “charismatic Christian parachurch organization.” I’m not sure I understand what that is, so I needed to research it. Unfortunately, I made the not smart decision to read about it before I went to bed last night. What followed next… were nightmares.

No, a person should not be persecuted for his or her religion but if an atheist were to be nominated to the Supreme Court, I bet one scarlet letter Republicans would be screaming bloody murder. As it turns out, Coney Barrett is in a cult that inspired…wait for it because it’s goooooooooood… The Handmaid’s Tale.

The Handmaid’s Tale by Margaret Atwood is a dystopian novel about subjugated women in a patriarchal society. The cult Amy’s in has advisers assigned to each person. Male advisers are called “Heads” and the female advisers were called…wait for it again… “Handmaids.” They changed it to “Leaders” after the novel came out. It’s similar to why Donald Trump doesn’t call his secret goons infiltrating our cities as “stormtroopers.”

In Atwood’s novel, women’s bodies are governed and treated as the property of the state under a theocratic regime. In Amy’s cult, members are taught that men have authority over their wives. Members swear a lifelong loyalty oath to each other, which is already like marriage…or a Trump rally. But former members of the “organization” say that the “heads” and “handmaidens” can play a huge role in the lives of members, such as directing their choice of partner, where they live, and how they raise children.

One former member says you’ll be reported if you’re caught drinking alcohol, dating the wrong person, or even for expressing a sexual thought they find disturbing (which is odd since they don’t have a problem with a man saying he’d probably be dating his daughter if they weren’t related), For these dirty thoughts, you can be banished, which to me sounds like something you would want. Please. Banish me.

Another former member said that People of Praise believes that only married couples should have sex, and that marriage is only between a man and a woman. That’s fine. You can believe that…but I don’t want a Supreme Court Justice decided that for me and the rest of the nation.

That’s exactly what Republicans want. They’re in the minority of views. What they want, the majority of the nation doesn’t. They demand a larger chunk of representation than the rest of America which is why they love the electoral college. They know the majority of American people don’t want another fucknut on the bench and if they wait until after the election, then they won’t be able to do it…so they’re rushing now. The Republican Party expects to be rejected by the American people in November and they will lose the White House and Senate. But, they’ll be able to take comfort in the fact they forced as much as they could upon us.

And now you know why I had nightmares last night. The Handmaid’s Tale is a dystopian nightmare of a fictional autocratic society. The author, Margaret Atwood, sat on the book for three years because she thought the concept was just too crazy. It’s kinda like when The Simpsons did episodes back in the 1990s of Donald Trump being president because the idea of a Trump presidency was too crazy and ridiculous. Now, he’s making lifetime appointments to the Supreme Court. Now it’s our nightmare.

Two questions for Amy Coney Barrett: Are you in a cult? And, did you have to take a loyalty oath to either?