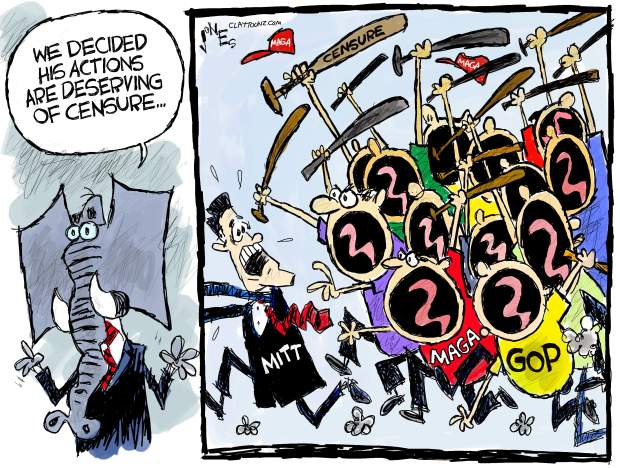 On Wednesday, every single Republican Senator voted to acquit, not exonerate, Donald Trump on the two impeachment charges the House brought up. Romney voted guilty on one of them.

The majority of the Republican Party consists of cowards and sycophants who pretend those traits are virtues. Donald Trump prefers the GOP to be weak and in fear of his wrath which consists of mean tweets. On Wednesday, Mitt Romney displayed a profile in courage, which is extremely rare in Washington. He will be punished.

Donald Trump wanted a totally partisan vote on his impeachment so he could argue he was exonerated, which he will anyway. While Romney was speaking on the floor of the Senate explaining his vote, Trump was canceling a photo-op before the press. Coward.

Donald Trump Jr. tweeted that Romney should be expelled from the party. Fox News host Laura Ingraham threatened to run against him in four and a half years. The flying monkeys are assembling.

Romney explained he took an oath before God. For all the other Republicans, Trump is their god. How dare he.

Romney, while criticizing the Bidens, stated that what they did weren’t crimes. He was shooting down Trump’s defense team’s arguments. He took down another Republican talking point when he said, “The defense argues that the Senate should leave the impeachment decision to the voters. While that logic is appealing to our democratic instincts, it is inconsistent with the Constitution’s requirement that the Senate, not the voters, try the president.” Mitt Romney may be the only Republican in Washington who’s actually read the entire Constitution and understands it.

Romney made another point every Trump sycophant has refused to recognize. “The grave question the Constitution tasked senators to answer is whether the president committed an act so extreme and egregious that it rises to the level of a high crime and misdemeanor. Yes, he did.”

Mitt Romney is not perfect. I’m really glad he wasn’t elected president, and instead, we got four more years for Obama to build a great economy for an old racist white man to inherit and take credit for. Romney has always stood for the 47% and displayed a lack of understanding of working-class and poor Americans. But that doesn’t mean he’s an evil person. That doesn’t mean he’s dishonest or a liar. That just means he’s not the right guy…until now.

He strongly opposed Trump’s candidacy and delivered a speech mocking the future president (sic). After Trump’s election, he had a discussion over frog legs to be Trump’s Secretary of State that really confused everyone. Donald Trump and Mitt Romney eat frog legs? When he was elected to the Senate, no one was expecting him to be a liberal never-Trumper firebrand, but we were hoping for some independence in the GOP. Finally, we got some.

I drew a cartoon and wrote a column last Sunday about the Cowards of Historic Proportions. I wrote there wasn’t one Republican in the Senate who wasn’t a coward. And while some Republicans privately said they voted to acquit Trump out of fear, it turns out there is one who stood up. I wrote history will remember them all as cowards, but Romney will be remembered for his bravery. While Lindsey Graham, Marco Rubio, Susan Collins, Lisa Murkowski, and Mitch McConnell have cemented their places next to the Vichy French, Romney will be next to Margaret Chase Smith. In this case, I like being wrong.