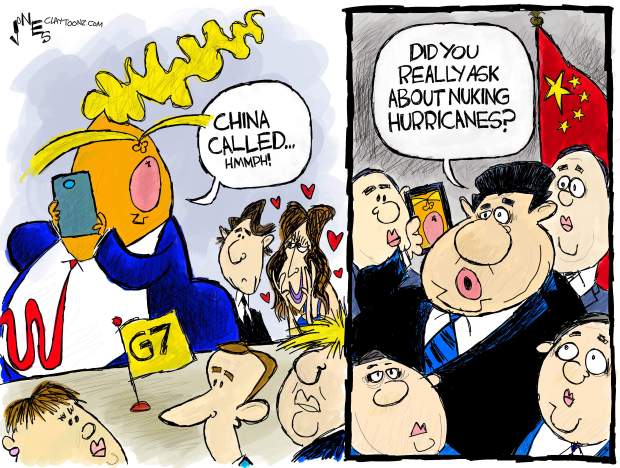 Donald Trump said, “China called.” Did they, Donald? Did they really call right when you needed a face-saving measure after saying you had regrets about starting a trade war with them? Sure they did. How convenient was that?

In the past, if Presidents Nixon, Ford, Carter, Reagan, Bush, Clinton, the second Bush, or Obama said, “China called,” you’d be like, “what’d they say”? With Trump, you’re like, “Did they?” At this rate, the current president of the United States has less credibility than the president of the Hair Club for Men because A.) the Hair Club guy’s claims are more believable than any of Trump’s claims and B.) his hair looks better.

That’s the current state we’re in. We can’t trust even the most minuscule comments from the president of the United States. Even his most innocuous (if you’re a Republican, “innocuous” means not important) statements and claims can’t be trusted unless they’re backed with video proof and witnesses who don’t work for him. Why? We don’t even have to go that far back for examples. Let’s just use some from last weekend’s G7 summit.

Our first example comes from Trump admitting to a reporter that he had regrets over the trade war with China. Later, the White House tried to clean it up by saying he regretted not raising the tariffs higher. That would be like after sticking your penis into a beehive, regretting there weren’t more bees.

Our second example is from Trump skipping the climate meeting before the close of the G7. Stephanie Grisham, the new and improved HuckaSans who at least doesn’t appear to have applied her makeup with a paint blaster, said he skipped the meeting because he had scheduled bilateral talks with Germany and India. When asked about the meeting, Trump said, “We’re having it in a little while,” after it had already happened. To make matters worse, photos of the meeting emerged that showed German Chancellor Angela Merkel and Indian Prime Minister Narendra Modi at the meeting along with Trump’s empty chair. Not only did Trump lie, but his representatives, who work for the United States of America, lied. So where was Trump? He was probably having “executive time” to see how much praise he was receiving from the Fox News propaganda machine. Or, maybe he was busy not being on the phone not talking to China.

Example number four. Donald Trump claimed Melania was chummy with Kim Jong Un. Trump said, “The first lady has gotten to know Kim Jong Un, and I think she would agree with me he is a man with a country (true) that has tremendous potential.” As it turns out, she was not present for any of Trump’s three love fests with Kim and there is no evidence she has ever spoken to him. And, if she had, I seriously doubt she speaks Korean. Sure, there are translators but how well can you know a person after three interpreted conversations? The new and improved HuckaSans swooped in to save the day and scoff at the press with, “President (sic) Trump confides in his wife (when they’re not in their separate bedrooms) on many issues including the detailed elements of his strong relationship with Chairman (sic) Kim.”

If anything, the only world leader Melania has any desires to get chummy with is Canadian Prime Minister Justin Trudeau. I hear she’s learning to speak Canadian.

Lie five: Trump said we gave Iran $150 billion. The fact is, it’s closer to $56 billion and we didn’t give it to them. It was their money that had been frozen in the United States.

Lie six: Trump said the Iran deal (that he pulled us out of) is “almost expiring if you think about it.” Trump should stop trying to think. Some provisions of the deal were written to expire in the next 10 to 15 years, but the deal as a whole was written to continue in perpetuity (if you’re a Republican, “perpetuity” means forever like).

Lie eight: Trump said China had been “taking” $500 billion from the U.S. for “many, many years” and “every single year.” That was just in case “many, many” don’t cover “every single.” The truth here is, China does not “take” money from the U.S, which most economists reject. The trade deficit with China has NEVER been $500 billion. Never.

Lie nine: Trump said, “We have billions and billions coming in” and “The United States which has never collected 10 cents from China, will in a fairly short period of time be over $100 billion in tariffs.” We’ve had tariffs on China for more than two centuries, so yeah…we’ve taken more than 10 cents from China. Americans make the tariff payments, not China.

Lie ten: Trump claimed Asian-American unemployment is at the lowest rate ever. Actually, the rate last July is higher than it was in President Obama’s last month.

Lie twelve: Trump claimed he’s done “environmental impact statements.” The only environmental statement he’s ever made was that climate change is a hoax created by China.

Lie fourteen: Trump claimed being president will cost him between three to five billion dollars. We haven’t seen his taxes but Forbes estimates his wealth at three billion and his claim of losing that much money “absurd.” Trump is trying to get our pity so he can grift the entire G7 next year by hosting it at one of his shitty golf resorts in Florida with the excuse “it’s near an airport.” It’s also near a McDonald’s which I’m afraid will be a major contributing factor.

Lie fifteen: Trump said he never asked about dropping nuclear bombs into hurricanes. Here’s the fact: Trump lies. If it leaks out of the White House that he said something stupid, moronic, idiotic, and oftentimes, racist, and then he denies ever saying it, it means he said it. What will happen is this; he denied it. His supporters will support his denial and tell the press he’d never say something so idiotic. Then, Trump will mistakenly admit he said it and try to explain how it makes sense. Then, his supporters will say he was only joking before coming back to, “Yeah, that makes sense. He’s a genius. I hate Mexicans.”

As for that phone call, Labor Secretary Steve Baby Fishmouth Mnuchin danced around whether there had been any actual phone calls. When asked, China’s Foreign Ministry said, “we called who now?”

Basically, if Trump wasn’t lying about the phone call then it would be the only thing he said that was true during his entire G7 adventure. Next time, can we send the Hair Club guy?