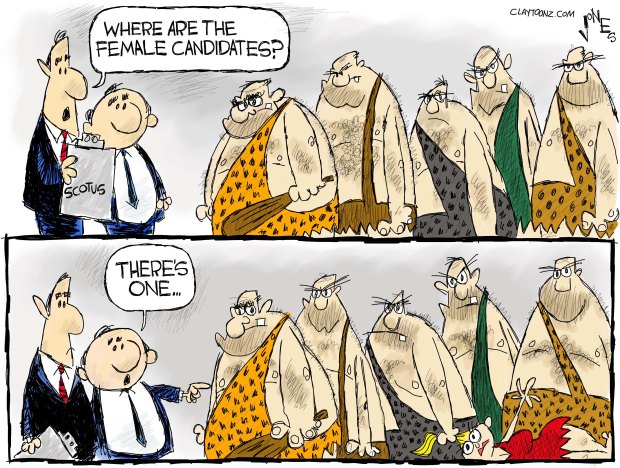 Donald Trump plans to make his horrible selection for the Supreme Court either today or tomorrow. Because he takes the responsibility of a lifetime appointment to the highest court in the last about as seriously as he takes firing Gary Busey, he plans to make the announcement Monday during prime time.

Staunch conservatives are bickering over some of Trump’s candidates as they’re afraid one or two aren’t adequately terrifying. They don’t want Trump to make the mistakes of past presidential appointments where a justice becomes an independent thinker. They want a candidate who will overturn Roe v. Wade, rule in favor of big business every time, suppress minorities, and restrict voting rights as much as possible. Another interest for Trump will be a justice who will stand up for him in case any part of the Russia investigation lands before the court.

Trump says he hasn’t asked any of the candidates if they’ll ban abortion, but he’s probably asked each of them for their personal loyalty.

While there’s speculation he may appoint a woman, there’s no mystery if the nominee will be white.

We’re about to have a second justice placed on the Supreme Court by a guy who shouldn’t be allowed to pick his own nose. Whether it’s a man or a woman, this person will work with four other justices to set this nation as far backward as possible. We’ll be cleaning up after Donald Trump long after he’s left the Oval Office, but the court will be a reflection of Trumpism for decades to come.

Half of Trump’s judicial nominees have refused to say if they agree with the Supreme Court’s decision to end racial discrimination in public schools. Trump has also promised to get the 14th Amendment, guaranteeing birthright citizenship, “amended” out of the Constitution by his second term.

Republicans like to say they’re against activist judges except when they’re their activists judges. A Republican Senate will select any activist judge Trump sends them. Trump and the GOP stole his first selection from Obama and Democrats don’t have the numbers to stop his second.

This is why Republicans are subservient to Trump. They’ll tolerate and ignore his lies, accept hits on the economy from his trade war, turn a blind eye to bad deals with North Korea while he tears apart our alliances, and help him obstruct investigations into his debt to Vladimir Putin. Even if Trump destroys the Republican Party, they’ll pay the cost for owning the Supreme Court.