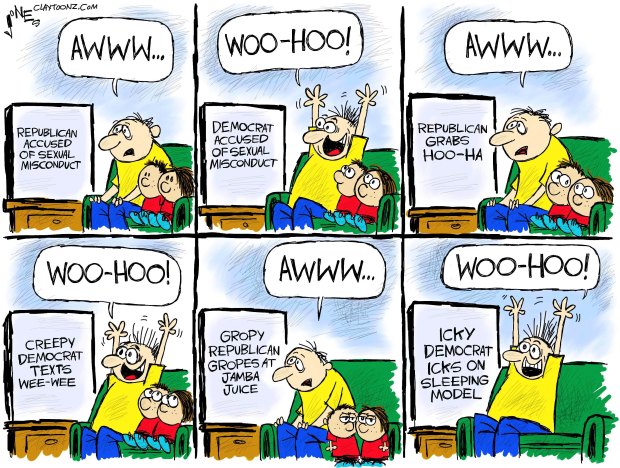 When Roy Moore, Alabama’s Republican nominee for the U.S. Senate, had a woman accuse him of trying to have sex with her when she was 14, she wasn’t alone. Three other accusers joined her. More accusers came out the next day, and the next, and the next. We’ve hit double digits. You can make a pun out of “Moore” accusers.

After Minnesota Senate Democrat Al Franken’s accuser came out, she was alone and nobody has joined her since. The comparison between Moore and Franken isn’t fair. One was trying to get his rocks off with teenage girls while the other was staging comedy bits. One set a pattern while the other did not. But, politics is not fair.

Donald Trump tweets out an attack on Al Franken while remaining silent on Roy Moore and being tone-deaf regarding over 20 of his own accusers. Trump has boasted, very proudly, about groping women and barging in on teenage girls while they’re naked in a dressing room. Sarah Huckabee Sanders said it’s different because Franken admitted wrongdoing while Trump has denied his ever happened, even though he’s on tape admitting it.

For Republicans, lying, deflecting, and calling your accusers liars is more honorable than being honest, apologizing, and calling for an ethics investigation on your own past behavior.

People talk a good game about bridging the partisan divide, but they crap all over themselves when the perfect opportunity confronts them. Alabama’s governor has stated she believes Roy’s accusers but, she’s gonna vote for him anyway. She would rather have a pedophile in the Senate than someone she disagrees with. How is that being a good Christian?

The accusations against Franken won’t be the last to hit Washington. Watch how Republicans respond. The same people critical of Franken and have yelled for him to resign will be silent when Republicans are hit. The hypocrisy won’t matter. It’ll be like it just doesn’t exist to them.

Republicans will take a cue from Trump and Roy Moore. They’ll lie, deflect, and attack the accusers. Being honest is for Democrats.

Creative notes: I completed this cartoon early last night but I held it for today. I sent it to my clients and one of them has already scooped me and published it on their site.