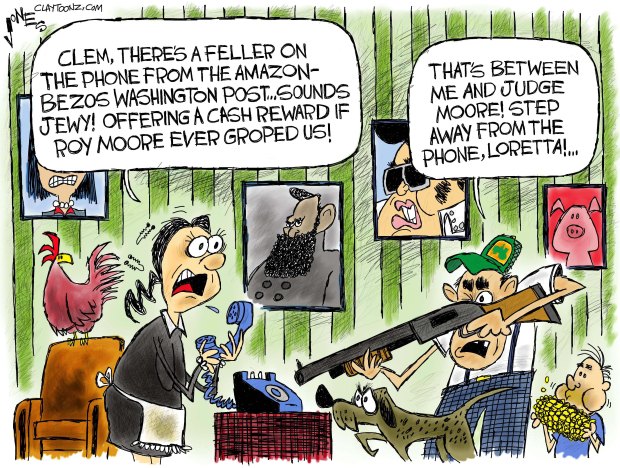 When you’re on the right side of an issue, you don’t have to make shit up. That totally explains why Roy Moore, his wife, their racist lawyers, Breitbart, Alabama Republicans, and all the hideous goons on social media are making shit up.

I’m glad I’m not a conservative cartoonist, but if I was then I like to think I wouldn’t act like a hideous ogre and follow talking points designed to defend a pedophile. Today, I’ve already seen four political cartoons using the sexcapades of Bill Clinton as a deflection for Roy Moore’s pedophilia. In addition to those four cartoons, there was a propaganda piece masquerading as a political cartoon by that Branco guy (look him up) following the same talking point. I can’t wait to see what Ben Garrison does on it (whatever it is, it’ll include about 38 labels). But then again, these are the same people who defended Nazis recently.

Just when I thought to deflect for a pedophile was rotten enough, news came out yesterday that some right-wing troglodytes are robocalling voters in Alabama to increase support for Moore. Every campaign conducts robocalls for their candidate, but in this case, the calls are pretending to be something they’re not.

The person on this call is posing as a Washington Post reporter offering money to anyone who claims they were sexually assaulted by Roy Moore.

The caller, going by the name the very Jewish-sounding name “Bernie Bernstein,” says, “I’m a reporter for The Washington Post calling to find out if anyone at this address is a female between the ages of 54 to 57 years old, willing to make damaging remarks about candidate Roy Moore for a reward of between $5,000 and $7,000.” The caller also states they will not be “fully investigating” the claims and could be contacted at albernstein@washingtonpost.com. The email is phony and will bounce back if you use it. They don’t really want a reply. They’re just trying to piss people off.

The first clue it’s a fake call is that the name doesn’t match the email address. The second clue is that the email doesn’t work. Another big one is the fact The Washington Post does NOT pay for stories or to sources. They’re not the National Enquirer.

Moore’s supporters have already spread stories that were quickly debunked, that the Post paid the women accusing Roy Moore of sexual misconduct. If you’re wrong, you make shit up. You make a divisive situation more divisive. You also hire a racist lawyer to defend your lying candidate.

If you think my cartoon is stereotyping, wait until you hear about this.

Yesterday, an attorney for Moore went on MSNBC and told host Ali Velshi that his “background” would help him understand Moore’s “process.”

Co-host Stephanie Ruhle asked the attorney, Trenton Garmon, why  Moore “would need permission from any of these girls’ mothers if they weren’t underage.” Garmon replied, “Culturally speaking, obviously there’s differences, (I) looked up Ali’s background there, and wow, that’s awesome that you have got such a diverse background, it’s really cool to read through that. But point is this, each culture has…” Then Ruhle interrupted him and asked, “What does Ali’s background have to do with dating a 14-year-old?”

Garmon said, “Sure — in other countries, there is arrangement through parents for what we would refer to as consensual marriage… “ Ruhle interrupted to inform the racist attorney that Velshi is from Canada. The attorney continued to drown from there…which is what everyone is doing who are defending Roy Moore.

As for me, I know how to swim. I suggest conservatives who are defending Moore take a few lessons.

Creative notes: So yesterday, my research entailed asking a friend, who is Jewish, if the term is “Jewy” or “Jewwy?” I’m fortunate she’s a really cool person and knows what I’m up to when I ask what seems like an absurd, and anti-Semitic question. I didn’t ask her because she’s Jewish. I worked with her at my last newspaper job, and I still ask her to proof text and the phrases for a lot of my cartoons. So, she gets a lot of crazy questions from me. I usually don’t tell her what I’m working on just so it’ll get her curiosity up.

Also, yeah I stereotyped the South with this cartoon…but I can do that. I’m from the South. But, in all honesty, the people in this cartoon are everywhere. Alabama just has a lot more of them. The people I have worked with in the South are some of the most creative people I’ve ever worked with, and they educated me on this business. And like Jews tell the best Jewish jokes, nobody laughs harder at Southerners than Southerners.

I have covered local issues before on people keeping chickens inside their homes, but most of that was when I was working in Honolulu. In fact, that city had to pass a law limiting how many chickens people can keep in their apartments. Seriously.