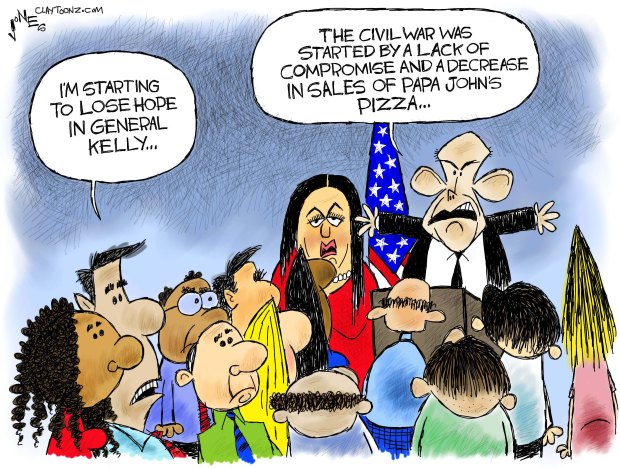 It seems so long ago that we had high hopes for General John Kelly and the influence he would command in the Oval Office.

The first publicly-known term for Kelly to take the job as the Chief-of-Staff was for Trump to get rid of Anthony Scaramucci. It gave us the impression he wouldn’t tolerate any nonsense, and when Scaramucci was fired we believed he had considerable influence on Donald Trump.

There were reports Kelly was running a tight ship. Staffers couldn’t just pop into the Oval Office anymore to share with the president the latest conspiracy theory they gleaned off InfoWars. People, even Jared and Ivanka, would need an appointment to meet with the president. Trump would also become more presidential, and we’d see fewer tweets from the First Toilet.

We all felt Kelly took the job out of an obligation to save the world from Trump. He would spare us from a nuclear Armageddon over an insult from North Korea, like “dotard.”

With General Kelly at the helm, we could sleep at nights.

Then, Trump said there were good people marching with Nazis. As the stupidity spilled from Trump’s mouth, Kelly was looking down at his shoes as though he was in serious anguish over the racist comments. We thought he was wondering what he “signed up for,” and how he could repair the problem in the White House.

As Trump spoke at the United Nations and referred to Kim Jong Un as “Little Rocket Man” and threatened to destroy him, Kelly sat in his chair nearly putting his head between his knees. We all assumed he was recoiling from the immature rant on an international stage. As it turns out, he was probably just suffering from dining on 7-11 breakfast burritos, and he was bargaining with God for the consequences to happen at any time, but not at that time.

Hope in Kelly started to dim as the tweets continued. Where was Kelly’s influence of being calm, reasonable, or at the very least, not acting like a man-baby with a full diaper?

Then, Kelly attacked a black Democratic Congresswoman. He accused her of politicizing the death of a slain soldier, even though Donald Trump had started it and even brought the death of the General’s son into the discussion. Kelly didn’t take down Trump’s lie that he’s the only president who ever called Gold Star families.

Kelly then told a lie about the congresswoman and called her an “empty barrel.” After footage of the event in question proved Kelly was a liar, the White House Spokesgoon, Sarah Huckabee Sanders told us that we shouldn’t “debate a four-star general.” To make matters worse, Kelly never apologized for using a racist insult, or for lying.

This week, Kelly defended white-people heritage by saying Robert E. Lee was an honorable man. He told us the Civil War was started by a “lack of ability to compromise,” ignoring the fact the root cause of the war was slavery. Duh!!! He claimed that people were more loyal to states than country back in the 1860s.

By now, the general’s credibility is on the same level as Papa John.

Papa John, the man who started a pizza company in a closet and now lives in a Kentucky castle told us that the anthem protests in the NFL are responsible for his decreased profits. Papa likes to say “better ingredients. Better pizza,” but what he’s really about is bigger bullshit.

John Schnatter, the CEO and founder of Papa John’s lost $70 million within hours after releasing its third-quarter financial report on Tuesday afternoon. After the report’s estimates on earnings and revenue hit Wall Street, the stock dropped 11% by 12:30 PM the next day.

Schnatter has criticized Obamacare in the past and used it to deny hours to his employees. He’s hosted fundraisers and contributed to the presidential campaigns of Mitt Romney and Donald Trump. Schnatter is becoming a hero to the far-right, the alt-right, the alt-white, and conservative goons in general. His pizza is probably now the favorite pizza for creepy icky people.

Thus, proving Republicans can swallow all sorts of disgusting bullshit.