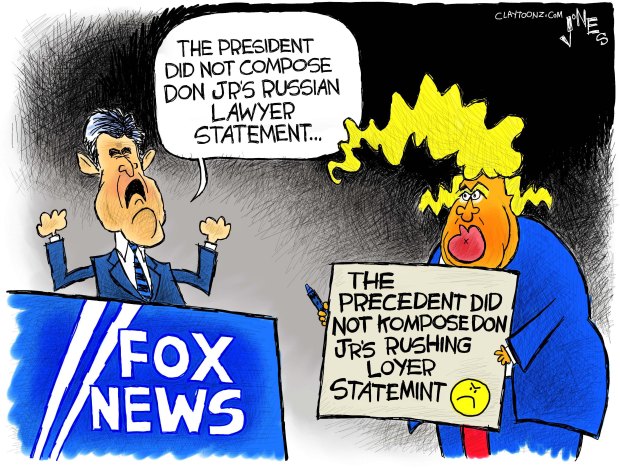 The Trump administration will throw any bone out there to make their case that the Russian Colluding story is “fake news.” They’re so desperate that they’ll trample on a man’s grave to push the narrative. If only there was an unethical news organization to help with….oh yeah…Fox News.

Seth Rich was murdered in Washington, D.C. in July 2016 in what police describe as a botched robbery attempt. That’s all conspiracy-lovin’ right-wing douchebags needed to make the case that Putin didn’t help Trump win the election. Fox News and others (the type who spread the story that Hillary Clinton was running a child-sex-slave ring in a D.C. pizza joint) ate it up. Eventually, Fox News had to discredit and retract the story (except for Sean Hannity who said he’d just stop talking about it).

Now there’s a lawsuit filed by a private detective hired to investigate the murder alleging that Fox News worked with White House officials to push the case to undermine allegations of Russian collusion with Trump’s presidential campaign. Rich worked for the DNC, and the debunked conspiracy is that he, not Russia, leaked all the emails to WikiLeaks and that Democrats had him killed.

Fox News used quotes from Rod Wheeler, the detective, that he claims he never said. He even has recordings with the Trump supporter, Ed Butkowsky who paid him to investigate, where Butowsky acknowledges the quotes are fake. Butowsky is a frequent guest on Fox business programs.

Wheeler and Butkowsky met with Sean Spicer during the investigation which Spicer has confirmed, though last May he said he didn’t know anything about the story (Spicer is now selling Trump bullshit pro bono). Butowsky messaged Wheeler before their meeting with Spicer, “We have the full attention of the White House on this.” Butowsky also claimed in emails to Wheeler that he was keeping the president informed, and that Trump really wanted the story published. On Tuesday night, Butowsky went on CNN to yell at Chris Cuomo and defended his statements as “jokes.” Republicans really gotta work on their humor because Butowsky’s jokes are about as funny as jokes that cops should practice police brutality and “if Russia is listening, they should release Clinton’s emails.”

I’m sure the odds of Fox News colluding with the White House is total bunk, and we could get a statement from Sean Hannity assuring us it’s just crazy talk, or “fake news.” Except, Sean is probably too busy having a secret dinner with Trump in the White House. Whatever do they talk about over the meatloaf?

Of course, the White House is denying this just like they denied that Trump Jr., Jared, and Manafort met with a Russian lawyer who promised dirt on Hillary Clinton. Maybe another example is the one they served up yesterday where Trump’s lawyer, Jay Sekulow denied that Donald Trump wrote Jr’s initial statement that the meeting was only about Russian adoptions….only to have the White House confirm Trump was involved in creating the statement. Presidenting is really hard when you gotta keep creating diversions for your children and other henchmen over all the shady shitty shit they keep doing. Why can’t a wannabe dictator get good help?

The White House explained it as a father taking interest in his son’s endeavors. Now it is good news that Trump is finally interested in helping to raise his 39-year-old son, though to be fair, he was always interested in Ivanka and Tiffany’s “developments.” Still, it does warm my heart to see Junior groomed to take over the evil family business, much like Dr. Evil groomed Scott Evil.

Of course, there’s really no indication that Trump would care about debunking the Russia Collusion story by blaming Democrats….other than his daily tweets, statements, casual remarks to whoever’s passing by about it.

Sean Hannity, the president’s dining partner, likes to argue that he is not a journalist. OK then, no argument. But, it’s peculiar that someone who makes that claim has a prime-time slot on a news channel to talk about news.

Creative note: I wrote this entire blog with a kitten in my lap. It’s really warm.