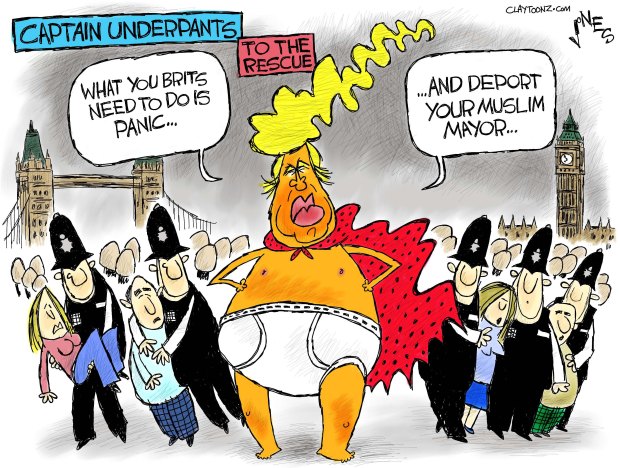 I was feeling my British lineage on Saturday and was dining on bangers and mash at an English theme pub when word came through on the attacks in London.

Three terrorists in a van ran over people on the London Bridge and then commenced to stabbing innocents who were enjoying an evening out in the British capital. Seven people ultimately died from the attack with scores more wounded. But the Brits fought back.

There are reports of pub patrons and employees throwing glasses at the attackers. One restaurant owner and his staff pulled their customers inside from a terrace where they were dining when they saw the attackers approaching. Strangers welcomed people into their homes. One of the stabbing victims is a journalist (who survived).

London police killed all three terrorists within eight minutes from when the attacked started. They shot over 50 bullets into them as the police were afraid they were wearing suicide vests. As it turns out, they were fake suicide vests to discourage people from getting close enough to stop them.

Londoners survive. They carry on. Their way of life continues and they refuse to be intimidated, whether their city is being bombed by the Luftwaffe or three cowards are running wild in the streets with knives. One man returned to a pub after the attack to pay his tab and leave a tip.

After the attack, Ariana Grande held a benefit concert in Manchester to support the victims of the terrorist attack in that city that targeted attendees at her concert. It was a star-studded event that featured Pharrell Williams, Take That, Robbie Williams, Little Mix, Katy Perry, Justin Bieber, Liam Gallagher, Miley Cyrus, and Coldplay.

While people of the U.K. presented multiple examples of how to respond to terrorism, and not have their way of life derailed, our president exhibited how not to react. Trump made it political, personal, and extremely immature. He’s continuing to embarrass our nation and thumb his nose at our European allies.

First, the man who has access to the best intelligence in the world retweeted a post from the Drudge Report that said, “Fears of new terror attack after van ‘mows down 20 people’ on London Bridge…” Remember, this is a president who derides the press as “fake news” but he’ll rely on right-wing conspiracy sites for news.

He sounded presidential for a second by tweeting support for the U.K., and then he tweeted that our courts need to enact his travel ban, which his administration has told us time and again, is NOT a travel ban.

The mayor of London, who is the first Muslim elected mayor of a major Western city, told his citizens not to be alarmed over more police officers patrolling the streets. Trump decided to take a part of his statement and misrepresent it. Trump tweeted “At least 7 dead and 48 wounded in terror attack and Mayor of London says there is ‘no reason to be alarmed!” Personally, I would prefer a president who does not have a comprehension problem.

Trump has feuded with the mayor before and what better time to troll him than during a terrorists attack. Rational people will be appalled by Trump’s personal attack on the mayor, but his base will probably rejoice over his tantrum. Trump is serving as president only for his base and not all of the people. Trump also used the occasion to attack proponents of gun control.

Monday morning Trump took to Twitter again to attack the courts and defend his travel ban. Again, he referred to it as a “ban,” and even wrote, “People, the lawyers and the courts can call it whatever they want, but I am calling it what we need and what it is, a TRAVEL BAN!” His lawyers should have fun with that at their next court appearance.

Trump spent his campaign promising to ban Muslims. He said Islam hated us. He proposed surveillance over mosques. Now his administration tells us it’s not about Muslims or even a “ban,” and those in the press who describe it as a “ban” are fake news outlets. Now their leader has doubled down on that term. Once again he’s contradicted his team and destroyed their credibility along with his own.

Trump hasn’t even waited for the details to emerge to use the attack for political arguments. So far there hasn’t been one attack that would have been prevented by his ban, as most of these terrorists have been home-grown.

Trump is about as presidential, helpful, and mature as a man pretending to be a superhero in his underpants.

Creative notes: I expect to see another cartoonist to portray Trump as Captain Underpants. I haven’t seen the movie yet but intend to after it’s available as an online rental. It won’t take long as the studio behind it had the horrible idea of releasing it the same weekend as Wonder Woman. I do hope to see Wonder Woman after the excitement dies down a little. I did see Guardians of the Galaxy sequel last week.

Before the movie, I was eating sushi at the bowling alley attached to the theater (yes. Bowling alley sushi). A very nice young man in a professional wrestling T-shirt told me he saw the movie four times. The movie was good but not so good you should see it four times in the theater.